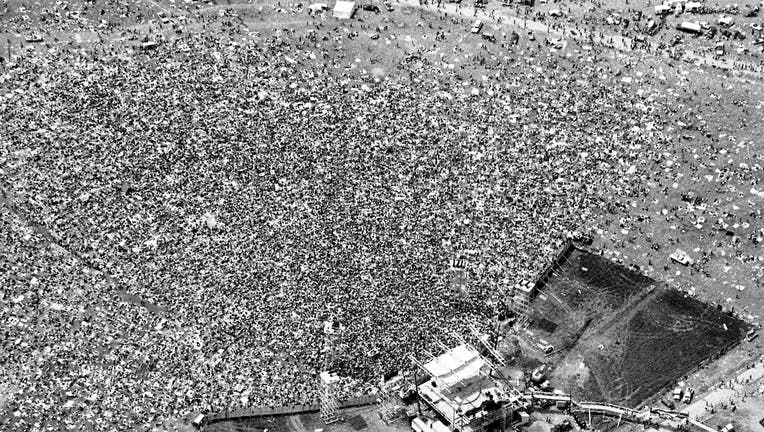 BETHEL, N.Y. (AP) - Woodstock will be celebrated on its 50th anniversary, but it won't be your hippie uncle's trample-the-fences concert.

While plans for a big Woodstock 50 festival collapsed after a run of calamities, the bucolic upstate New York site of the 1969 show is hosting a long weekend of events featuring separate shows by festival veterans like Carlos Santana and John Fogerty.

But officials concerned about traffic jams and crowding are strictly limiting access to the famous field now maintained by the Bethel Woods Center for the Arts. Visitors will need "travel passes" to drive to the site Thursday through Sunday, and only people with tickets for evening events can get those passes. There will be checkpoints.

"We're trying to encourage people that are not interested in the concert-side of things, and just want to come and sort of breathe the air and feel the vibes ... to come on other weekends," said Bethel Woods chief executive officer Darlene Fedun.

Some would argue that Woodstock's five-decade legacy belongs to the 400,000 or so people who attended the weekend festival, or to anyone inspired by the peace and music that came out of that anarchic weekend. But, as the anniversary approaches, in practice, it belongs to the separate groups that control the Woodstock music festival name and the concert site 80 miles (130 kilometers) northwest of New York City.

Woodstock co-founder Michael Lang was part of a group that failed this year to pull off a multi-day Woodstock 50 festival. Organizers faced a series of setbacks, including the loss of their initial upstate New York site. Then they were denied a permit at an alternate site about a month before the show.

Woodstock organizers were denied permits a month before the '69 show, too -- that time in Wallkill, New York. Lang found the Bethel site with weeks to go. No such kismet this time. Eleventh-hour plans to stage a free concert in Maryland fizzled.

"It's as foolish to think you can recreate a 1969 rock event like Woodstock in 2019 as it would be to try and persuade people to go back to old-fashioned telephones and operator-booked long distance calls," said Simon Napier-Bell, a veteran rock manager who has worked with acts including the Yardbirds and Wham!

The Woodstock era was a time of amateurism and idealism, Napier Bell wrote in an email, and this is a time of professionalism and realism.

The actual concert site in upstate farm country has attracted tie-dyed pilgrims for decades. Famous for becoming a muddy mess on Woodstock weekend, the old farm field is now a tidy greenspace. Visitors can wander the trimmed grass and make peace sign poses by the waist-high Woodstock monument in a corner.

"It's like hallowed ground for us rock-and-rollers," said 56-year-old Bill Murtha, of Troy, New York, during a visit this week. "It's like Gettysburg. You can feel the vibe of what happened."

The site went establishment after the not-for-profit Bethel Woods center bought up the hillside and surrounding land in the late `90s. A Woodstock-and-'60s-themed museum sits atop the fenced-in field and there's an outdoor amphitheater over the hill where Santana and Fogerty will play on separate nights.

"When they first built it, I had mixed feelings about it," said 66-year-old Bill Bokesz on one of his regular visits to the site. "But there's not condos here. It's still here. They preserved the field. ... They did a really good job."

The Somersworth, New Hampshire, resident will come back to see Arlo Guthrie perform Thursday before an outdoor screening of the Woodstock documentary on the festival field. He'll hang out with campers nearby and, yes, he has tickets.

Though access to the field is usually open, Bethel Woods is setting restrictions next weekend to avoid any whiff of Woodstock-style chaos. Fedun said the site already expects big crowds of ticket holders and the country roads can only handle so much traffic. Local officials expect up to 100,000 visitors in the area from Thursday through Sunday.

"This time, we're going to get it right," Town of Bethel supervisor Dan Sturm told reporters this week.

"In order to give everyone a chance to make this pilgrimage," according to the flyer, "passengers will have a maximum of 30 minutes to spend at the monument per trip."