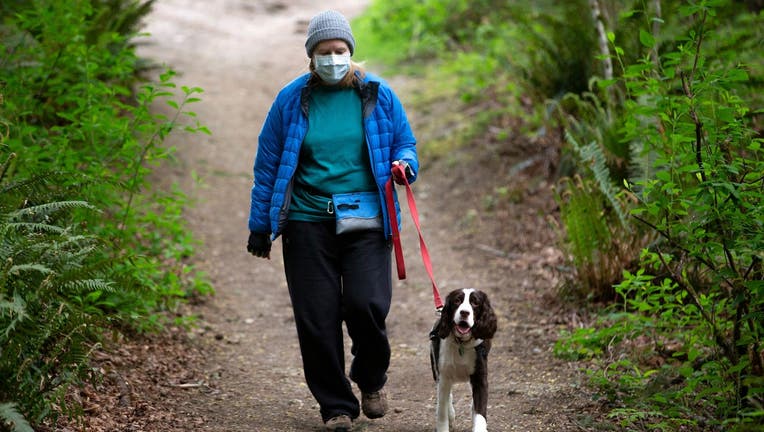 WASHINGTON - As temperatures rise and sunny skies and mild breezes coax people out of quarantine, many are wondering about the likelihood of catching the coronavirus while outdoors.

“Everyone’s itching to get outside, I think it can be done. We just have to pay very close attention to doing it safely,” Dr. Jason Farley, nurse epidemiologist trained in infectious disease and professor at Johns Hopkins University School of Nursing, told Fox News. “I really think a practical and common-sense approach right now is what’s called for.”

While experts agree the great outdoors reduces the risk of virus transmission as compared to confined areas with stagnant air, they also say there is still a theoretical risk. Critical factors influencing virus transmission from an infectious person to a susceptible person involve physical distancing, duration of time together and surrounding ventilation, doctors say.

Dr. Timothy Brewer, professor of medicine and epidemiology at UCLA, told Fox News ventilation outdoors will rapidly disperse any viral particles in the air. When people engage in conversation, they express clouds of aerosols or respiratory droplets. The ventilation outdoors plays a role in dispersing these particles, which is a good thing.

"In the hospital, when we design a negative pressure room, we want to have at least 12 complete air exchanges in the room to prevent transmission of airborne infections or respiratory droplet infections," Brewer explained. "If you're outside, your ventilation greatly exceeds that, so being outside will disperse any viral particles in the air very rapidly."

Brewer explained that talking generates particles of different sizes. Particles larger than five microns are most likely to transmit a respiratory infection like COVID-19 and tend to travel short distances — within three to six feet. Gravity then carries down the particles until they impact the ground or land on another person. Particles smaller than five microns can float, and any air current at all will disperse them, the doctor said.

RELATED: COVID-19 patients may not be infectious after testing positive a second time, experts say

However, Farley said wind would not stop the expressed droplets from traveling within arms distance, unless it was blowing “pretty significantly.”

There is limited data so far on the likelihood of coronavirus outbreaks originating outdoors. One study (not yet peer-reviewed) published in early April by six scientists across several Chinese universities examined 318 outbreaks of COVID-19 in 120 cities in China between Jan. 4 and Feb. 11 and found that outbreaks of three or more cases were largely confined to enclosed spaces, such as home and transportation, and that only one outbreak originated outside.

RELATED: No social distancing on the National Mall as federal guidelines expire tomorrow

"All identified outbreaks of three or more cases occurred in an indoor environment, which confirms that sharing indoor space is a major SARS-CoV-2 infection risk," the researchers concluded.

Sunlight also helps to disinfect particles, though the key factor in reducing virus transmission outside is the dispersion of viral particles by the wind, according to Brewer.

Both Brewer and Farley advise those venturing outdoors to maintain at least six feet in physical distancing. Face masks can also help to reduce virus spread.

Farley told Fox News of steps he’s taking to change his own behavior when outdoors. A group of his close friends wanted to meet up for a run, he said. The runners maintained at least six-feet distance and enjoyed a tailgate afterward with cars appropriately spaced apart.

Brewer said people should continue to wear masks outdoors, particularly if they don't have trouble breathing.

“We [could] still be with one another and enjoy each other’s company but we did so in a safer manner,” Farley said.

While the health experts advise exercise like walking or jogging outdoors, Farley said to be as respectful of others as possible. “If you’re passing someone, do so with a wide gait, or a wide girth around the person, try not to brush elbows with them as you run by,” he said.

Experts also advised caution when touching potentially contaminated surfaces, like door handles at public restrooms at the beach. Appropriate levels of hand hygiene need to be maintained even in outdoor spaces, Farley said. Washing hands after returning from trips to the grocery store is also advised.

“People should be very mindful that just because some of the restrictions are being lifted, it does not mean it is over,” Dr. Humberto Choi, pulmonary and critical care physician at Cleveland Clinic, told Fox News. He shared his experience working in the intensive care unit, where doctors are still seeing “many patients who are very sick from coronavirus.”

“People still need to take this very seriously,” he said.

Choi suggested planning in advance before heading outdoors. Go shopping for groceries when stores are less busy, he said, and stay away from team sports. Opt for tennis or throwing a frisbee instead, which present a much lower risk of infection than group sports like football or soccer.