WASHINGTON (AP) - President Joe Biden’s nominee for secretary of transportation, Pete Buttigieg, was headed down a smooth path to quick confirmation, pledging to senators on Thursday to work with them to carry out the administration’s ambitious agenda to rebuild the nation’s infrastructure.

A Senate committee vote on his nomination could come as soon as next week.

Speaking at his confirmation hearing with his husband sitting nearby, Buttigieg pointed to a "generational opportunity" to create new jobs, fight economic inequality and stem climate change. Often sidestepping specifics, Buttigieg hinted at a broad climate-centric role for the department that will require significant investments, on top of Biden's proposed $1.9 trillion COVID relief plan.

"We need to build our economy back, better than ever, and the Department of Transportation can play a central role in this," the 39-year-old former mayor of South Bend, Indiana, told the Senate Commerce Committee.

He indicated he would reverse a Trump administration rollback in federal automotive fuel economy standards to reduce greenhouse gas emissions, work to stiffen oversight of aviation safety as the troubled Boeing 737 Max makes its return to the skies and encourage use of electric vehicles, such as by adding a half-million charging stations nationwide.

Buttigieg did not specify where money could come from for big investments in infrastructure, and wouldn’t rule out a tax increase. He floated the possibility of a major change in how highways are funded, such as by converting from the current Highway Trust Fund, which is paid for through the gas tax, to a "vehicle miles traveled" alternative that would tax drivers based on their road mileage.

Republican Sen. Roger Wicker of Mississippi, who chaired the hearing Thursday for a last time as the Senate finalized its transfer of power to Democrats, signaled likely challenges in finding ways to pay for a costly infrastructure overhaul, but said he looked forward to working with Buttigieg.

"I’m quite certain he will be confirmed," Wicker told the hearing. 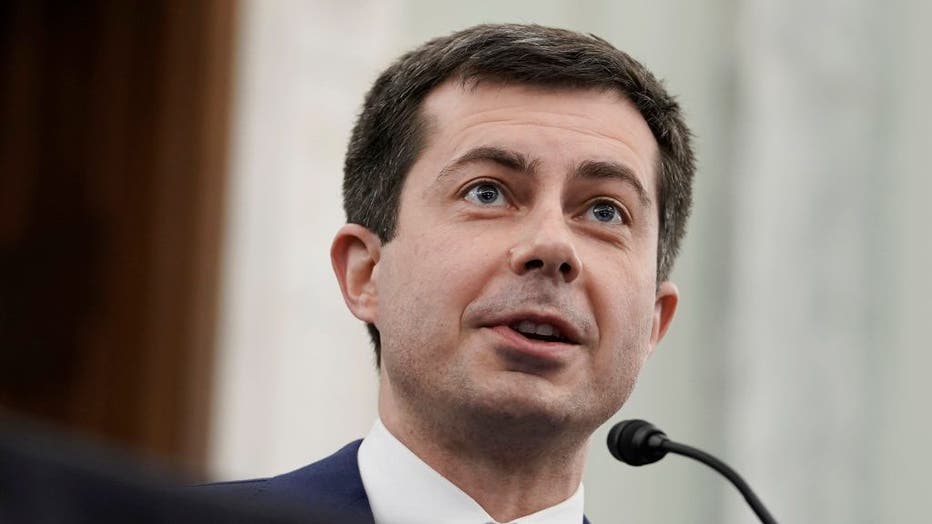 Pete Buttigieg, nominee for US Transportation Secretary, testifies at his confirmation hearing before the Senate Commerce, Science, and Transportation committee in Washington, DC, on January 21, 2021. (Photo by Ken Cedeno / POOL / AFP) (Photo by KEN

Buttigieg, a former Democratic presidential candidate, would be the first openly gay person confirmed by the Senate to a Cabinet post. He was among the first batch of Cabinet selections getting hearings this week as Biden urges the Senate, where Democrats hold a slim majority, to quickly confirm his nominees.

Buttigieg would take over at a critical time for transportation. The coronavirus pandemic has devastated many modes of transportation, with airlines, city subway systems and Amtrak seeking federal aid to help keep afloat until ridership recovers.

Biden is mandating mask wearing on airplanes and public transportation systems to slow the spread of the coronavirus, and Buttigieg made clear that would be a priority at the department.

"We must ensure all of our transportation systems — from aviation to public transit, to our railways, roads, ports, waterways and pipelines — are managed safely during this critical period, as we work to defeat the virus," he said.

Still, it’s Biden’s infrastructure plan, the full details of which are expected to be released next month, that is likely to pose the biggest challenges. Biden has yet to say how he intends to pay for new spending.

Beyond standard transportation fixes, which are easier to promise than to get through Congress, Biden wants to rejuvenate the post-coronavirus pandemic economy and create thousands of green jobs by making environmentally friendly retrofits and public works improvements.

Expanding on Biden's vision, Buttigieg hinted there could be new regulations or legislation governing self-driving cars to boost development, which would transform the industry. Because technology is advancing quickly, he wants to ensure "that we’re acting so that on the policy side, we are ready for all of the things that automated vehicles will bring to our roads and to our economy."

Buttigieg pointed to his past experience as a veteran of the Afghanistan War as well as city mayor as valuable in taking a ground level approach to improving transportation. He described initiating a "smart streets" program to make South Bend’s downtown more pedestrian- and bicyclist-friendly while spurring hundreds of millions of dollars in economic investment.

Buttigieg would not step into the job with extensive experience enacting federal transportation policy, though advocates hope his public stature and loyal following from the 2020 presidential campaign could help push through broad changes long unachievable on Capitol Hill. Biden this week nominated Polly Trottenberg, a former commissioner of New York City’s transportation department, to be deputy secretary.

On Thursday, Wicker jokingly asked Buttigieg if the Senate hearing might pale in comparison to his high-profile media stops, including the night before on "The Tonight Show Starring Jimmy Fallon." He's slated to appear Friday on ABC’s "The View."

"I would characterize this as a unique experience," Buttigieg responded with a smile.

During Donald Trump's four years in the White House, his administration often held "Infrastructure Week" events and touted transportation improvements. But it was not able to push Congress to pass any broad plan to update the nation’s roads and bridges, rails and airports.