Mayor Muriel Bowser and D.C. Police Chief Robert Contee III both have concerns with the proposed criminal code for the District. While the code hasn't been updated since the 1900s, city leaders want to make sure the updates will make the city a safer place to be. FOX 5's Stephanie Ramirez has all the details.

WASHINGTON - At the first Mayor-Council breakfast held in person since the pandemic, Mayor Muriel Bowser and D.C. Police Chief Robert Contee III waived a red flag on some of the changes to the D.C. Criminal Code overhaul the council is expected to take up on Wednesday.

The city’s leaders agree the overhaul or rewrite of the city’s Criminal Code is long overdue. In fact, the last time it was restructured was in the early 1900s.

Both the mayor and Chief Contee expressed concern about the weakening of penalties. Specifically, Mayor Bowser seemed worried about the decriminalization of certain crimes, including public urination and drinking in public.

Chief Contee gave an example that the proposed changes would allow a burglar to face a lesser charge if they aren't caught by the homeowner versus if they were.

In the same meeting, the D.C. police chief also gave a public safety update, noting that murders and total violent crime are down (7% and 5% respectively) in the city compared to this time last year.

"The other thing that scares the hell out of me when you talk about these Glock switches, 101 of them recovered last year, those Glock switches make firearms fully automatic. And I’ve seen a switch made on a 3D printer over the course of a presentation in about 40 minutes," Contee said. 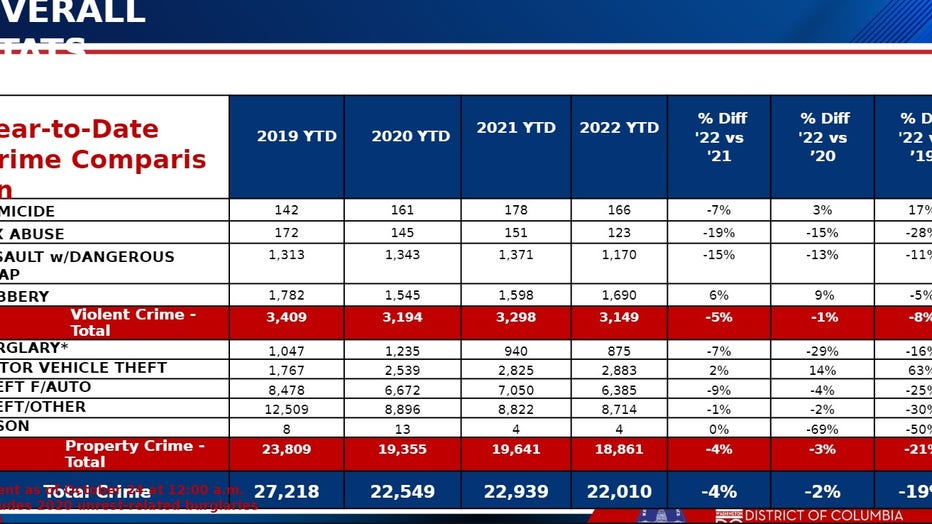 While murders in the District are currently down, the homicides recorded so far this year are still high compared to the total homicides reported in pre-pandemic years.

Speaking on the Criminal Code overhaul, the mayor asked ANC commissioners and community members for more time to review the rewrite.

"What this code should do, just like the council members said earlier, it should deal with inconsistencies," Bowser said. "It should eliminate things that no longer make sense for the code. What it should definitely not do is make this community not safe."

Mayor Bowser previously connected the council’s decriminalizing of fair evasion with crime on Metro. Given previous comments and her concerns voiced on Tuesday, FOX 5 asked the Mayor whether she felt the D.C. Council is making D.C. less safe.

She didn’t directly answer "yes" or "no."

"What is proposed now, we received this on Friday," he said. "How many people have actually digested what is in there to this point? That’s the thing that we’re looking at. So if it goes forward, as is, with those adjustments that I’m raising as issues, if they haven’t been adjusted, there will be implications to community members — our city as a result of that, and I don’t think there’s going to be good implications."

"[The] Criminal Code revision has been a 16-year-long process to update a 120-year-old cold, a lot of collaboration. So the Chief and I had a lot of conversations, U.S. attorney’s office, to really make changes to what they propose to us," D.C. Councilmember Charles Allen said.

Allen told FOX 5 that the committee plans to move forward with a markup on the bill on Tuesday. This could give the full council the opportunity to vote on making the bill into law this year.

Allen did work with city leaders to keep carjacking its own offense after different officials, including the U.S. Attorney's Office, raised flags about folding the carjacking charge under robberies.

The councilman's office told FOX 5 they did also work on some of the other concerns mentioned by the mayor and police chief. Both offices are still reviewing the latest proposal released on Tuesday.

The overhaul proposal would also extend jury trials to all misdemeanors, a matter both the D.C. Superior Court judge and appeals court chief judges with support from the mayor, wrote to the D.C. Council about. The judicial members expressed that doing so could bog down an already backed-up system. 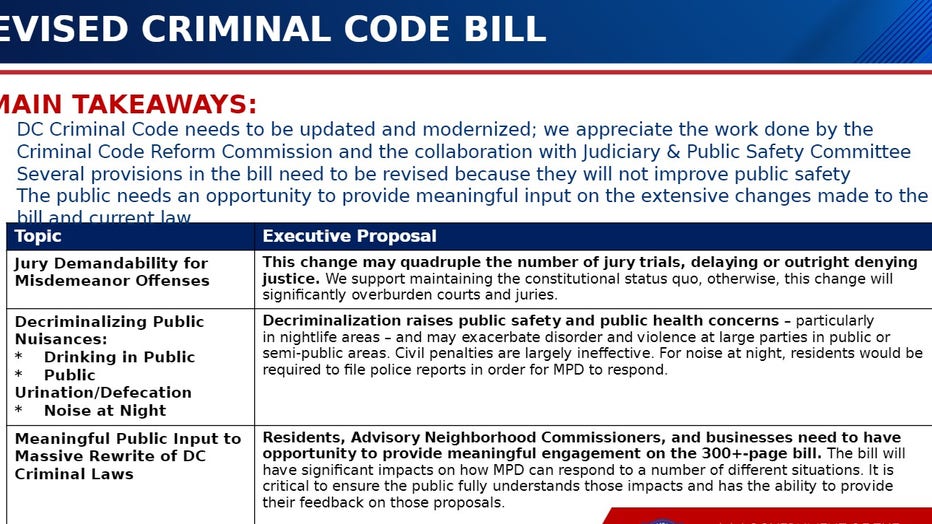 In a letter sent to Councilman Allen’s office, court officials said they’re already down 14 vacancies out of 62 trial judge positions at the Superior Court and have two out of nine vacancies at the appeals court.

Mayor Bowser argued these changes do not need to happen now. Allen said that the plan will include a phase-in process through 2030.