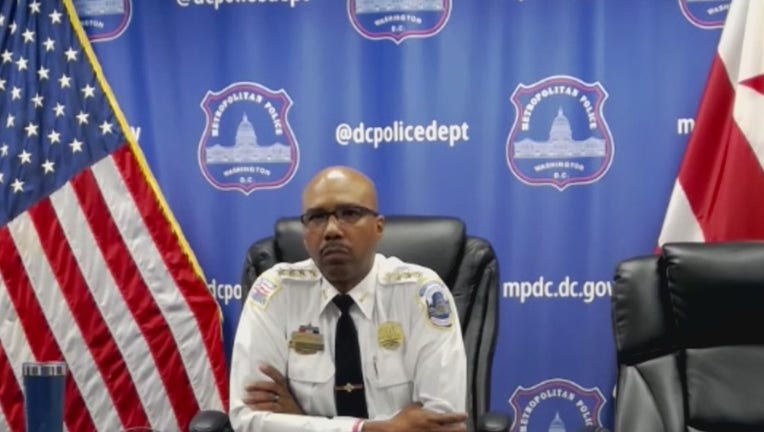 WASHINGTON - The top cop in D.C. held a community conversation Wednesday calling on the entire District to do their part to put an end to gun violence.

"Enough is enough. If you do something in our community we are collectively on board you have violated in this space and no longer welcome to be in our community," D.C. Police Chief Robert Contee III said.

The top cop in D.C. held a community conversation Wednesday calling on the entire District to do their part to put an end to gun violence.

"We know who trigger pullers are and gun toters and we don’t say anything but we know some people are carrying guns in our communities and that’s troublesome to me," Contee said. "It's not just a youth issue, it's just our youth are showing up more in the violent crime neighborhood!"

On Thursday, the D.C. Mayor and Police Chief faced questions after 12 people were shot in the District the day before. FOX 5's Stephanie Ramirez reports.

Teens who grew up in D.C. shared their concerns during the virtual meeting. Some said that realistically, they don't believe gun violence can end.

"I think people are ashamed to come out to stand up for what they believe in and I’m sick of seeing people die," said Gia, a teen that is involved with the T.R.I.G.G.E.R. Project.

Contee also said the average homicide suspect has been arrested 10 times prior to them being taken into custody for murder.

"I feel relatively safe I have noticed things happen and I try to be smart especially when I’m by myself," said Whitney Heavner who travels into the city for work.

"There’s been a couple times there’s been some shootings right by the house or some young guys confronted me coming home late at night," said Steven Ballesteros, another D.C. native.

"In my 30 years I’ve never seen so many guns in this city and young people as quickly as they can in this city," Contee said.

Many on the call left wondering where the District goes from here with crime rates rising across the nation’s capital.

"Washington is a resilient city and we aren’t going to give up," the police chief said. "We will see this city turn around and the way is if we all get in on this together."

The discussion also touched on police involved shootings, as well as how the pandemic played a role in the increased violence.

Chief Contee said that he’s asking those at home to hold police accountable for the things they say they will do for their community.