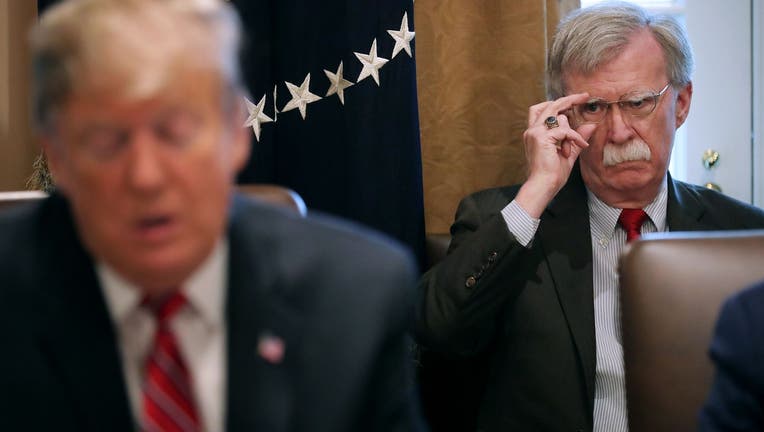 WASHINGTON, DC - FEBRUARY 12: National Security Advisor John Bolton (R) listens to U.S. President Donald Trump talk to reporters during a meeting of his cabinet in the Cabinet Room at the White House February 12, 2019 in Washington, DC. Trump said he

WASHINGTON - A federal judge ruled Saturday that former national security adviser John Bolton can move forward in publishing his tell-all book despite efforts by the Trump administration to block the release because of concerns that classified information could be exposed.

The decision from U.S. District Judge Royce Lamberth is a victory for Bolton in a court case that involved core First Amendment and national security concerns.

But the judge also made clear his concerns that Bolton had "gambled with the national security of the United States" by opting out of a prepublication review process meant to prevent government officials from spilling classified secrets in memoirs they publish.

The ruling clears the path for a broader election-year readership and distribution of a memoir, due out Tuesday, that paints an unflattering portrait of President Donald Trump's foreign policy decision-making during the turbulent year-and-a-half that Bolton spent in the White House.

Nonetheless, Lamberth frowned upon the way Bolton went about publishing the book. Bolton took it "upon himself to publish his book without securing final approval from national intelligence authorities" and perhaps caused irreparable harm to national security, Lamberth said.

But with 200,000 copies already distributed to booksellers across the country, attempting to block its release would be futile, the judge wrote.

"A single dedicated individual with a book in hand could publish its contents far and wide from his local coffee shop," Lamberth wrote. "With hundreds of thousands of copies around the globe -- many in newsrooms -- the damage is done. There is no restoring the status quo.'