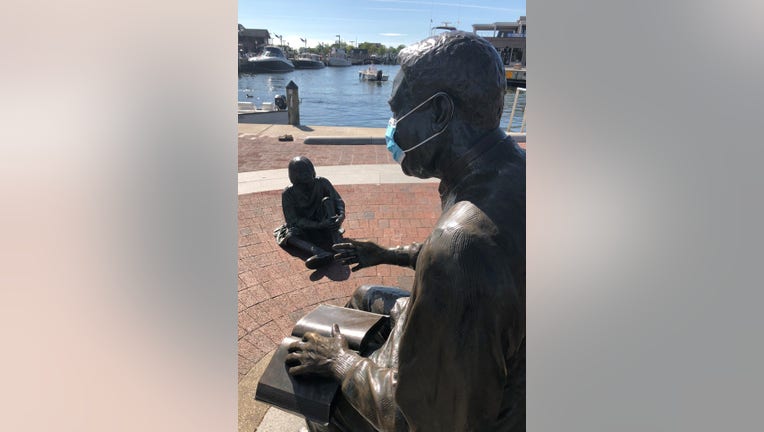 Annapolis residents say they're concerned by the big crowds on the capital's waterfront now that it's summer. (FOX 5 DC / Stephanie Ramirez)

ANNAPOLIS, Md. - Annapolis is not only Maryland’s capital city, it’s also a waterfront city, which many Marylanders say drew crowds on Friday and is expected to do so again on Saturday.

“We were here last night. And it was very busy, so we stayed on the boat,” said Howard and Cheryl Knott on Saturday morning.

They had a front row seat to all the activity aboard their yacht named “True North.”

The Knotts couldn’t be happier to get back out Friday night, but the couple tells FOX 5 they are still a little more cautious when it comes to getting back to normal life.

“You know, without a vaccine, without treatment ... That is a concern so we’ve been ... trying to be very cautious not to go out unnecessarily," Cheryl Knott said. "We’re on the boat but there’s only the two of us here."

The couple enjoyed a quiet Saturday morning but are expecting a very active Saturday evening.

“I feel like with the way Annapolis has been so far, I feel like it’s going get pretty packed, pretty fast,” said Marian Karam and a friend, who told FOX 5 they might return for a curbside drink.

This weekend marks the first Saturday since Maryland Governor Larry Hogan lifted his “Stay at Home” order, moving the state in to Stage 1 of his “Roadmap to Recovery” plan.

With counties and cities given some leeway, Anne Arundel County’s leader announced churches would remain closed and retail stores reopening must stick to curbside pick-up.

“Let people make their own decisions about how to control their health,” said a jogger going through Annapolis' Main Street on Saturday morning.

A number of protests calling on Gov. Hogan to reopen the state’s economy and businesses has also hit Annapolis.

“To be honest with you. I’m not a doctor, I can’t tell you what’s going on. I think they have our best interest in mind. The Governor is a business man. He understands. But we have to get back to work at some point,” said Kevin Blonder, the owner of Buddy’s Crabs and Ribs.

With some 30 years at the same Market St. location, Blonder says the hardest part is the “not knowing.”

“[You] have to be careful. Have to not get greedy. Even though it’s beautiful weather, the time is right, but thank goodness at least we can get outside and we can do it safely,” Cheryl Knott said.

What phase 1 of Maryland reopening means for you