In his first official move as president-elect, Joe Biden and Vice President-elect Kamala Harris on Monday announced the formation of the Transition COVID-19 Advisory Board which will “help shape” the incoming administration’s approach to managing the coronavirus pandemic.

The board will be led by co-chairs Dr. David Kessler, who served in both the George H.W. Bush and Clinton administrations as FDA commissioner; Dr. Vivek Murthy, the surgeon general under the Obama administration; and Dr. Marcella Nunez-Smith, an associate professor of internal medicine, public health and management at Yale University. Also on the board: Dr. Ezekiel Emanuel, an architect of the Affordable Care Act and former special adviser for health policy during the Obama administration.

The move comes as the U.S. neared 10 million total coronavirus cases with more than 237,000 related deaths amid what's being described as the third COVID-19 wave, according to the latest update by Johns Hopkins University.

Biden on Monday also announced that Dr. Beth Cameron, who helped create a “pandemic playbook” under the Obama administration, and Dr. Rebecca Katz, who served on the Biden campaign’s advisory committee on coronavirus, will serve as advisors to the Transition on COVID-19.

“Dealing with the coronavirus pandemic is one of the most important battles our administration will face, and I will be informed by science and by experts,” Biden said in a statement. “The advisory board will help shape my approach to managing the surge in reported infections; ensuring vaccines are safe, effective, and distributed efficiently, equitably, and free; and protecting at-risk populations.”

Members of the board have experience “engaging with and leading our country’s response to nationwide and worldwide public health crises,” according to the Biden Transition Team.

Biden made ending the coronavirus pandemic a central message in his campaign, and voters favored the former vice president over President Trump on the question of who is better able to handle the pandemic, according to the Fox News Voter Analysis.

Other members include Dr. Luciana Borio, who served in several senior leadership positions at the FDA; Dr. Rick Bright, who served as director of the Biomedical Advanced Research and Development Authority and as the deputy assistant secretary for preparedness and response at the Department of Health and Human Services under the Trump administration; Dr. Atul Gawande; Dr. Celine Gounder; Dr. Julie Morita; Dr. Michael Osterholm who served as a Science Envoy for Health Security on behalf of the State Department, and as a state epidemiologist for Minnesota; Dr. Loyce Pace, who served in leadership positions at LIVESTRONG Foundation and the American Cancer Society; Dr. Robert Rodriguez; and Dr. Eric Goosby. 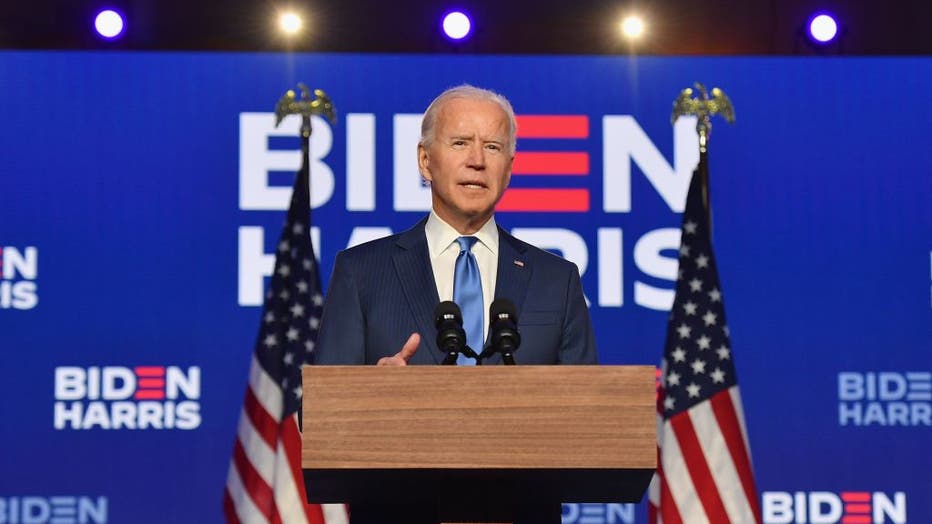 Democratic presidential nominee Joe Biden delivers remarks at the Chase Center in Wilmington, Delaware, on November 6, 2020. - Three days after the US election in which there was a record turnout of 160 million voters, a winner had yet to be declared

The advisory board will “help guide the Biden-Harris Transition in planning for the President-elect’s robust federal response.”

The scientists and public health experts on the board will consult with state and local officials to “determine the public health and economic steps necessary to get the virus under control, to deliver immediate relief to working families, to address ongoing racial and ethnic disparities, and to reopen our schools and businesses safely and effectively.”

The board is expected to come up with a seven-point plan to beat COVID-19, including ramping up testing, securing personal protective equipment (PPE) supply chains with the Defense Production Act, and investing in vaccines.

President Trump, earlier this year, invoked the Defense Production Act to mobilize the private sector to provide medical equipment, largely masks, that health care professionals needed to treat patients infected with COVID-19. In April, the president also invoked the Defense Production Act, deeming meat processing plants a part of the country’s critical infrastructure as concerns mounted that the food supply chain would be disrupted due to the pandemic.

As for vaccines, one or more COVID-19 vaccines could be ready before the end of 2020, according to Trump administration officials, who have said they are “cautiously optimistic” they will be available, although in “limited quantities.”

Trump’s Health and Human Services Secretary Alex Azar went even further, estimating that there would be enough vaccine doses for all senior citizens, health care workers and first responders by the end of January, and for all Americans who want them by late March or early April.

“There is hope on the way in the form of safe and effective vaccines in a matter of weeks or months,” Azar said.

The Trump administration is currently manufacturing six potential vaccines through a program named Operation Warp Speed. The plan is to be able to begin distributing vaccines the moment they’ve been cleared for use by the Food and Drug Administration.

Once they’re available, vaccines will first be distributed to people most at risk for the virus and essential health care workers, according to deputy director of infectious disease at the Centers for Disease Control and Prevention Dr. Jay Butler. He said all jurisdictions had submitted their distribution plans to the CDC and the plans were currently under review.

Meanwhile, Biden is expected to push to restore the Obama-era White House National Security Council Directorate for Health Security and Biodefense, while re-engaging with the World Health Organization.

Biden’s move to re-engage with the World Health Organization comes after Trump submitted a notice to withdrawal, which would not become effective until July 2021.

Trump, in April, announced that the U.S. would freeze funding to the WHO, and threatened to make the freeze permanent if the organization did not enact "major substantive reforms." The U.S. had been the top contributor to the agency to the tune of approximately $450 million a year. China meanwhile pays approximately $50 million a year -- although Beijing had recently announced a $2 billion injection of funds.

Trump repeatedly raised concerns about WHO officials’ praise of Chinese "transparency," its ignoring of warnings about the virus from Taiwan, and its repetition of Chinese claims that COVID-19 could not be spread from person-to-person. Trump has also pointed to opposition from WHO officials to his decision to place a travel ban on China in the initial days of the crisis.

Biden is also expected to re-launch the U.S. Agency for International Development’s pathogen tracking program called “PREDICT,” and will call on all governors to enact mask mandates.

Biden’s 2020 presidential campaign had a strong focus on the novel coronavirus, as the U.S. battled the pandemic. President Trump’s brief hospitalization after contracting COVID-19, as well an autumn surge in the coronavirus in key states across the country, kept the campaign’s spotlight firmly on an issue that did no favors for the president’s reelection chances.

Fox News' Jacqui Heinrich and Lucas Manfredi contributed to this report. Get updates on this story from foxnews.com.