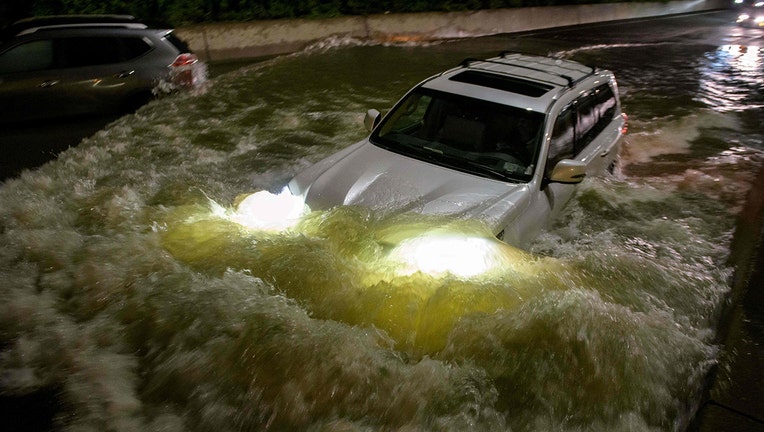 A motorist drives a car through a flooded expressway in Brooklyn, New York early on September 2, 2021, as flash flooding and record-breaking rainfall brought by the remnants of Storm Ida swept through the area. (Photo by Ed JONES / AFP) (Photo by ED

President Biden will travel to New Jersey and New York next week to survey the aftermath of Hurricane Ida after it caused severe flood damage on the east coast.

The president's plan to visit Manville, New Jersey, and Queens, New York, on Tuesday comes after he surveyed damaged neighborhoods in Louisiana Friday to observe the storm's impact there, particularly in suburbs surrounding New Orleans.

"My message today is….there's nothing political about this," Biden said Friday. "It's just simply about saving lives and getting people back up and running. And we're in this together. And so we're not leaving any community behind rural, city, coastal."

The Category 4 storm first struck Louisiana last Sunday with sustained maximum winds of 150 mph before moving north toward the tristate area on Wednesday and Thursday with severe rain, leading the governors of New York and New Jersey to issue states of emergency.

In a region that had been warned about potentially deadly flash flooding but hadn’t braced for such a blow from the no-longer-hurricane, the storm killed at least 46 people from Maryland to Connecticut on Wednesday night and Thursday morning.

More than 1,000 employees with the Federal Emergency Management Agency (FEMA) were deployed to Louisiana and parts of the Northeast last week, according to a Saturday press release from the agency.

The National Guard Bureau deployed 15 high-water vehicles in New Jersey to help with search and rescue efforts, the American Red Cross set up 13 emergency shelters across New York and New Jersey, and the Federal Communications Commission (FCC) is assisting wireless carriers in restoring power to residents impacting by the storm.