WASHINGTON - President Joe Biden signed an executive order Thursday targeting half of all vehicle sales in the United States to be zero-emission vehicles by 2030.

Biden wants automakers to raise gas mileage and cut tailpipe pollution between now and model year 2026. That would mark a significant step toward meeting his pledge to cut emissions and battle climate change as he pushes a history-making shift in the U.S. from internal combustion engines to battery-powered vehicles.

He also urged that the components needed to make that sweeping change — from batteries to semi-conductors — be made in the United States, reflecting a balance to gain both industry and union support for the environmental effort, with the future promise of new jobs and billions in new federal investments in electric vehicles.

Pointing to electric vehicles parked on the White House South Lawn, the president declared them a "vision of the future that is now beginning to happen."

"The question is whether we lead or fall behind in the race for the future," he said, "Folks, the rest of the world is moving ahead. We have to catch up."

In obvious good spirits, the president hopped in an electric-powered Jeep Rubicon and took a quick drive around the driveway after the ceremony.

The new order is part of the administration’s broader "Build Back Better" agenda and aims to bolster infrastructure. It will also include new mileage and anti-pollution standards from the Environmental Protection Agency and Transportation Department, part of Biden's goal to cut U.S. greenhouse gas emissions in half by 2030. 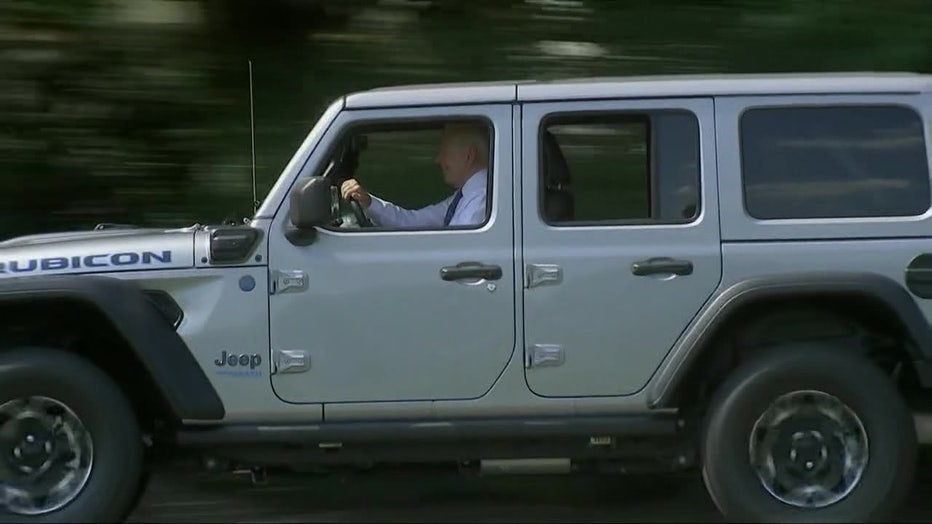 The moves are steps toward Biden’s pledge to cut emissions and battle climate change as the president pushes a shift in the U.S. from internal combustion engines to battery-powered vehicles.

Administration officials said the auto industry had agreed to a target that 40% to 50% of new vehicle sales be electric by 2030. The standards apply to both "light-duty vehicles" like cars, SUVs, and pickup trucks, as well as for "medium and heavy-duty vehicles."

The standards, which have to go through the regulatory process including public comments, would reverse fuel economy and anti-pollution rollbacks done under former President Donald Trump. At that time, the increases were reduced to 1.5% annually through the model year 2026. The Trump administration had said that the looser mileage standards would allow consumers to keep buying the less fuel-efficient SUVs that U.S. drivers have favored for years.

It remained to be seen how quickly consumers would be willing to embrace higher mileage, lower-emission vehicles over gas-guzzling SUVs, currently the industry's top seller. The 2030 EV targets ultimately are nonbinding, and the industry stressed that billions of dollars in electric-vehicle investments in legislation pending in Congress will be vital to meeting those goals. 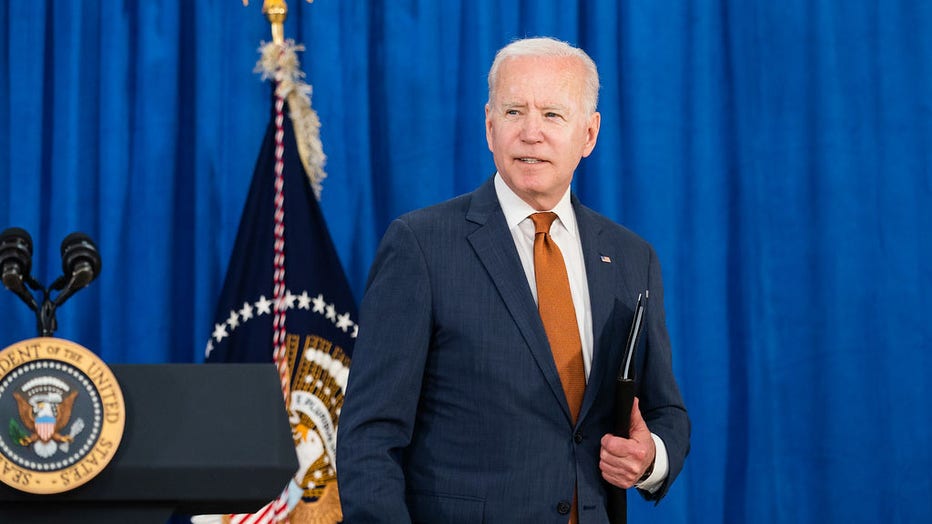 Only 2.2% of new vehicle sales were fully electric vehicles through June, according to Edmunds.com estimates. That’s up from 1.4% at the same time last year.

The White House didn't release information on the proposed annual mileage increases, but Dan Becker, director of the safe climate campaign for the Center for Biological Diversity, said an EPA official gave the numbers during a presentation on the plan.

The official said the standards would be 10% more stringent than the Trump rules for model year 2023, followed by 5% increases in each model year through 2026, according to Becker. That's about a 25% increase over the four years.

The White House said American automakers including Ford, GM, and Stellantis, along with the United Auto Workers union heads will stand with the president as he signs the executive order.

"Today, Ford, GM, and Stellantis announce their shared aspiration to achieve sales of 40-50% of annual U.S. volumes of electric vehicles (battery electric, fuel cell, and plug-in hybrid vehicles) by 2030," the automakers said in a joint statement. "Our recent product, technology, and investment announcements highlight our collective commitment to be leaders in the U.S. transition to electric vehicles."

"With the [United Auto Workers] at our side in transforming the workforce and partnering with us on this journey, we believe we can strengthen continued American leadership in clean transportation technology through electric vehicle innovation and manufacturing," they added.

The automakers said that the goal to cut gasoline-based car sales by half in less than a decade would be made possible through government-supported purchase incentives, charging networks, investment in continued research, as well as incentives for the expansion of electric vehicle manufacturing and supply chains.

Transportation is the single biggest U.S. contributor to climate change. Autos in the U.S. spewed 824 million tons of heat-trapping carbon dioxide in 2019, about 14% of total U.S. emissions, according to the EPA.

Several automakers already have announced similar electric vehicle sales goals to those in the deal with the government. Last week, Ford’s CEO said his company expects 40% of its global sales to be fully electric by 2030. General Motors has said it aspires to sell only electric passenger vehicles by 2035. Stellantis, formerly Fiat Chrysler, also pledged over 40% electrified vehicles by 2030.

Under a shift from internal combustion to electric power, jobs that now involve making pistons, fuel injectors and mufflers will be replaced by the assembly of lithium-ion battery packs, electric motors and heavy-duty wiring harnesses.

Many of those components are now built overseas, such as China. Biden has made the development of a U.S. electric vehicle supply chain a key part of his plan to create more auto industry jobs.

"We are in a global competition for who gets to make the clean cars of the future, and President Biden’s leadership means that we’ll develop that manufacturing and those supply chains right here in America," said Sen. Tom Carper, D-Del., who chairs the Senate Environment and Public Works Committee.

In a bipartisan infrastructure bill awaiting Senate passage, there is $7.5 billion allocated for grants to build charging stations, about half of what Biden originally proposed. He wanted $15 billion for 500,000 stations, plus money for tax credits and rebates to entice people into buying electric vehicles.

The Associated Press and FOX Business contributed to this report. It was reported from Cincinnati.