The goal of the order would be to use the $600 billion the federal government spends on procurement to boost domestic factories and hiring, said officials who insisted on anonymity to discuss the forthcoming announcement.

WASHINGTON - President Joe Biden on Monday appeared to boost his goal for coronavirus vaccinations in his first 100 days in office, suggesting that the nation could soon be vaccinating 1.5 million Americans on average per day.

Biden added that he expects widespread availability of the vaccines for Americans by spring, with the U.S. being "well on our way to herd immunity" by summer. Even so, he warned the nation was going to be "in this for a while, and could see between 600,000 and 660,000 deaths before we begin to turn the corner in a major way."

Biden's new vaccination target comes after he and his aides faced criticism for the 100 million goal in his first 100 days in office. The U.S. has exceeded a pace of 1 million doses per day over the last week.

"I’m quite confident that we will be in a position within the next three weeks or so at the range of a million a day and in excess of that," Biden said.

He added that "God willing," the number could reach up to 1.5 million Americans.

Biden said he feels more than confident that under his administration's plan to combat the ongoing coronavirus pandemic, the U.S. will have enough vaccines and tools and infrastructure to efficiently inoculate Americans to achieve herd immunity.

"We are trying to get out a minimum of 100 million vaccinations in 100 days and move in the direction where we are well beyond that in the next 100 days so we can get to the point where we reach herd immunity in a country of over 300 million people," Biden said.

When asked by a reporter when anyone who wants a vaccine could get one, Biden said he thinks that could happen this spring.

Before the coronavirus vaccine was created, the concept of herd immunity as a way to combat the coronavirus was disputed by various studies and medical experts who argued that it could be a dangerous and deadly path amid an ongoing pandemic.

Epidemiologists define the herd immunity threshold for a given virus as the percentage of the population that must be immune to ensure that its introduction will not cause an outbreak. If enough people are immune, an infected person will likely come into contact only with people who are already immune rather than spreading the virus to someone who is susceptible.

Herd immunity is usually discussed in the context of vaccination. For example, if 90% of the population (the herd) has received a chickenpox vaccine, the remaining 10% (often including people who cannot become vaccinated, like babies and the immunocompromised) will be protected from the introduction of a single person with chickenpox.

A way that herd immunity has been successfully implemented in previous pandemics and epidemics is through the use of vaccines. Diseases like measles, smallpox and polio have largely been eradicated due to the successful distribution of a working vaccine.

Earlier Monday, in an effort to continue to curb the virus, Biden reinstated COVID-19 travel restrictions on most non-U.S. travelers from Brazil, Ireland, the United Kingdom and 26 other European countries that allow travel across open borders. He also added South Africa to the list.

White House press secretary Jen Psaki said South Africa was added to the restricted list because of concerns about a variant of the virus that has spread beyond that nation.

"This isn’t the time to be lifting restrictions on international travel," Psaki said. 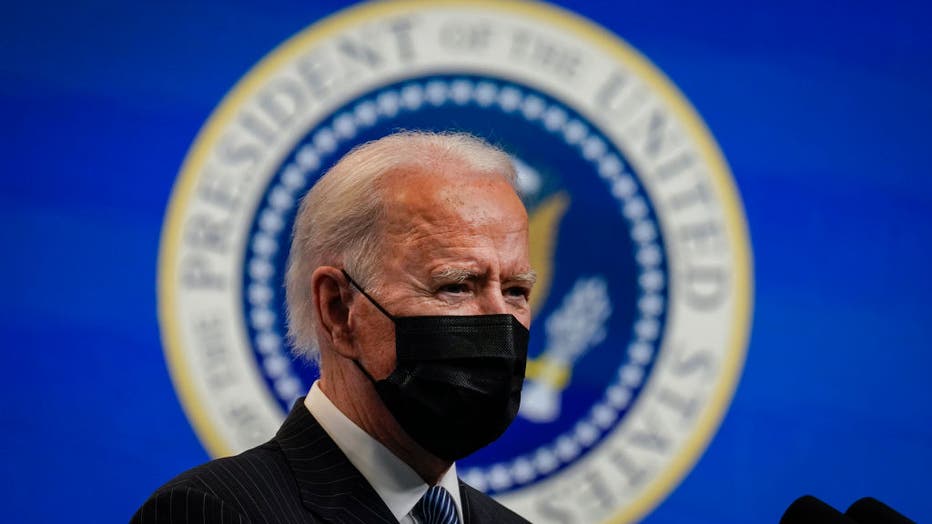 U.S. President Joe Biden speaks after signing an executive order related to American manufacturing in the South Court Auditorium of the White House complex on January 25, 2021 in Washington, DC.

The prohibition Biden is reinstating suspends entry to nearly all foreign nationals who have been in any of the countries on the restricted list at any point during the 14 days before their scheduled travel to the U.S. The new requirements go into effect on Tuesday.

"We have concern about the mutation that’s in South Africa," Fauci told "CBS This Morning." "We’re looking at it very actively. It is clearly a different and more ominous than the one in the U.K., and I think it’s very prudent to restrict travel of noncitizens."

Meanwhile, across the U.S., COVID-19 deaths and cases per day dropped markedly over the past couple of weeks but are still running at alarmingly high levels, and the effort to snuff out COVID-19 is becoming an ever more urgent race between the vaccine and the mutating virus.

Fauci, said the improvement in numbers around the country appears to reflect a "natural peaking and then plateauing" after a holiday surge, rather than the arrival of the vaccine in mid-December.

States that have been hot spots in recent weeks such as California and Arizona have shown similar improvements during the same period.

On Monday, California lifted regional stay-at-home orders in favor of county-by-county restrictions and ended a 10 p.m. curfew. The shift will allow restaurants and churches to resume outdoor operations and hair and nail salons to reopen in many places, though local officials could maintain stricter rules.

The virus has killed over 419,000 Americans and infected more than 25 million, with a widely cited University of Washington model projecting the death toll will reach about 569,000 by May 1.

And health experts have warned that the more contagious and possibly more deadly variant sweeping through Britain will probably become the dominant source of infection in the U.S. by March. It has been reported in over 20 states so far. Another mutant version is circulating in South Africa.

The more the virus spreads, the more opportunities it has to mutate. The fear is that it will ultimately render the vaccines ineffective.