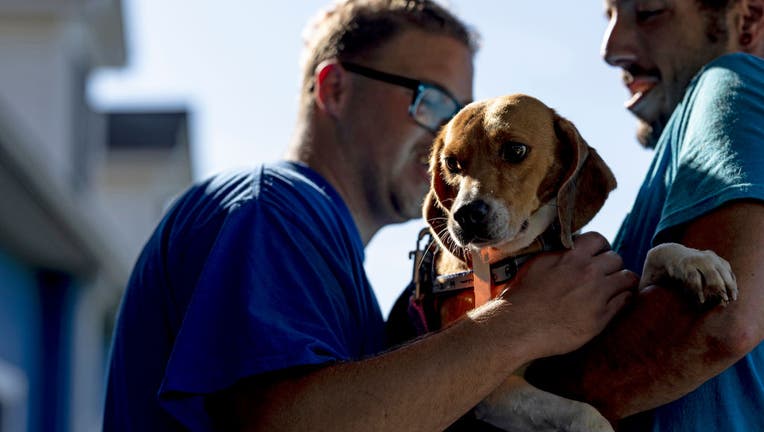 WASHINGTON - Thousands of beagles have been removed from a mass breeding facility in Virginia and are ready to be adopted.

The Humane Society of the United States said Tuesday that more than 2,000 beagles are now being transported to shelter and rescue organizations across the country. Many have already arrived, including some dogs in Michigan, Florida, and California.

The dogs are now in need of loving homes with families who can foster or adopt them.

Several beagles found their furever home! Nearly 4,000 dogs were rescued from a lab on the East Coast; now many of there were adopted and are living happy lives.

In July, the Humane Society revealed that approximately 4,000 beagles would be removed from Envigo, a company that breeds and sells animals for research. Envigo has been accused of having unfit conditions, including providing inadequate veterinary care and insufficient food, according to the Humane Society.

Envigo’s facility, located in Cumberland, Virginia, was taken to court in 2021 after the U.S. Department of Agriculture and other law enforcement agencies found multiple federal violations.

In a complaint filed with the U.S. District Court in the Western District of Virginia, adult and puppy beagles were said to be underfed, injured and sick. The dogs were reportedly kept in small spaces where feces piled up. The complaint also alleged the dogs received inadequate medical care and were subject to painful medical science experiments.

Court records stated that more than 300 puppies died at the facility between January and July 2021.

How to adopt, foster the rescued beagles

Beagles play with volunteers of Homeward Trails Animal Rescue on Aug. 7, 2022, in Fairfax, Virginia. The animal rescue center has been working to find homes for 500 of the 4,000 Beagles recently rescued from the breeding and research facility in Cumberland, Virginia, which was shut down due to multiple violations for animal cruelty. (Photo by Anna Moneymaker/Getty Images)

Fostering a beagle can help the animal acclimate to life in a home environment, the Humane Society of the United States said. This can be a good option for people who are unable to care for a dog permanently or want to make sure the animal is a good match before making the decision to adopt.

Many of these organizations are also looking for volunteers to help care for the beagles. This can include working directly with the dogs or helping with administrative, fundraising or other tasks. Another option beyond adoption that can help is by donating to the shelters and rescue organizations, often via their specific websites or by calling. This allows the organizations to provide the best care and continue assisting in large-scale rescue operations, the Humane Society said.

Those interested in adopting, fostering or helping a local shelter with the rescued beagles are asked to contact the organization directly, the Humane Society of the United States said.

Several of the partner organizations are located in states coast-to-coast, including California, Kentucky, Oklahoma, Pennsylvania, Virginia, Wisconsin and Wyoming.

Click here for the Humane Society’s full list of shelters and rescues that have received the beagles.

"Please note that each shelter will have its own process for foster and adoption requests and we cannot guarantee that each interested adopter will receive a dog," the Humane Society states on its website. "If you are unable to adopt one of the approximately 4,000 beagles, we encourage you to consider adopting one of the many other pets waiting for a loving home at your local shelter or rescue group."