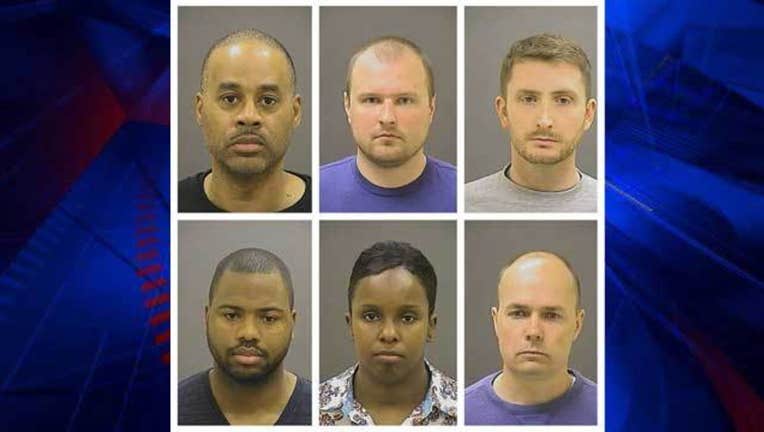 At a minimum, State's Attorney Marilyn Mosby should be replaced with an independent prosecutor, the lawyers state in a motion filed in Baltimore District Court.

In the latest legal move to challenge the charges, which range from assault to second-degree "depraved-heart" murder, the motion says Mosby's prosecution has been "overzealous" and "politically motivated."

Mosby announced the charges a day after receiving an investigative report from the police. The motion argues that part of the reason she acted so swiftly was to quash protests that gave way to violence in West Baltimore, where Gray was arrested and where Mosby's husband, Nick Mosby, is a city councilman. A separate motion argues that her rapid decision could be at odds with a law that requires a thorough investigation prior to filing charges.

"The need to quell the raging inferno of human rage and revulsion within the confines of the 7th District was emergent," the motion reads. "These officers soon found themselves offered up to the masses by Mrs. Mosby to quell the uprising that caused most harm to the district where her husband is the City Council representative."

Gray was arrested April 12 and died a week later. Authorities say he suffered a spinal injury in the roughly 45 minutes between his arrest and his arrival at a police station in the back of a prisoner transport van. He was not wearing a seatbelt inside the van, and was in handcuffs and leg irons.

The attorneys also maintain that Gray's arrest was legal because a knife he had at the time is illegal. In charging the officers, Mosby said the arrest was unlawful because the knife was in fact legal under state law.

In a letter to the Baltimore City Solicitor's Office attached to Friday's motion, attorneys for the officers threatened to sue the city, Mosby and the Baltimore Sheriff's Department. The fact that the officers filed a claim against Mosby, the criminal defense attorneys argued in the motion, is yet another conflict of interest.

Other claimed conflicts of interest outlined in court papers include Mosby's political relationship with Billy Murphy, a defense attorney who is representing the Gray family, and who donated $5,000 to Mosby's campaign. Murphy also once represented Mosby regarding a complaint made to the Attorney Grievance Commissioner of Maryland about statements she made during her campaign. In addition, in her first days in office Mosby dismissed charges against a client of Murphy's. Those ties, the attorneys argue, "create a conflict for which the only remedy is the recusal of Ms. Mosby and the Baltimore state's attorney's office."

One of the officers, William Porter, was initially represented by Martin Cadogan, who donated $1,000 to Mosby's campaign. Cadogan is no longer representing Porter. Other donors to Mosby included the Baltimore Fraternal Order of Police political action committee, which gave her $3,250. The FOP, which is the union that represents Baltimore police officers, also has suggested the case be handled by another prosecutor.

Rochelle Ritchie, a spokeswoman for the state's attorney's office, did not return a call Friday seeking comment. Murphy also did not return a message Friday, but on Thursday posted a response on social media to the FOP's suggestion that Mosby recuse herself because of her ties to him.

"We expect Marilyn Mosby to be no more swayed by our donation than she is by the one made by Baltimore Police," Murphy wrote on Twitter.