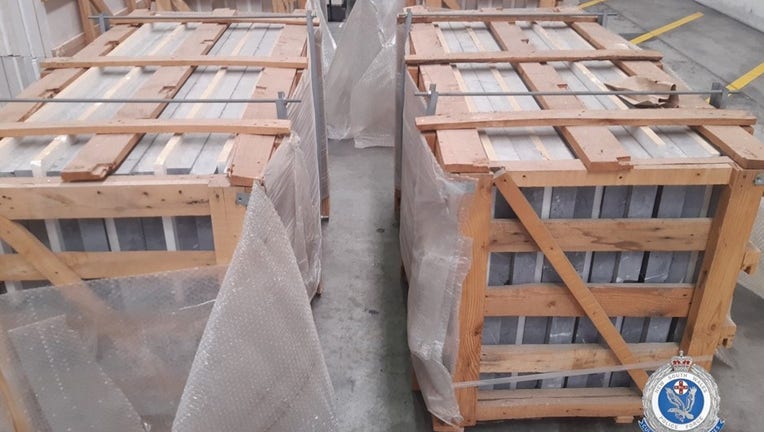 SYDNEY (AP) - Authorities have found 1.8 metric tons (2 U.S. tons) of methamphetamine hidden in marble tiles shipped from the Middle East to Sydney in what police describe as the largest-ever seizure of the illicit drug in Australia.

Three men were arrested after 748 kilograms (1,649 pounds) of the drug were found early this month hidden in 24 containers that arrived at Port Botany, officials said on Friday.

Another 1,060 kilograms (2,337 pounds) of meth were found in 19 containers that arrived at the same port last week. The drugs were hidden in the same method and were all shipped from the United Arab Emirates.

Police estimate the meth’s street value at 1.6 billion Australian dollars ($1.1 billion), which reflects the higher prices that Australians pay for illicit drugs than users do in many comparable countries.

More than 200 pounds of meth seized at California-Mexico border

A 65-year-old woman and her 19-year-old granddaughter were arrested at the California-Mexico border on suspicion of trying to get a vehicle containing more than 200 pounds of meth through the border.

"This seizure will be felt for weeks to come by many high-, mid- and lower-level suppliers," Watson said.

No further arrests have been made since last week’s seizure. Investigators have turned their attention to identifying the overseas suppliers.

"The Middle Eastern region is probably our main focus," Watson said. "But I certainly wouldn’t restrict our investigation to just that region."

All the containers were destined to be sent to a factory in western Sydney that had been set up to quickly extract meth from marble, Watson said. Police do not know how often the factory had been used.

The three men already arrested — aged 24, 26 and 34 — face potential life sentences in prison if convicted of drug trafficking. They have appeared in court and have been refused bail.