FOX 5 is taking a deeper dive into our area’s police departments to see how they’re trying to work with the community in the wake of these massive protests.

MONTGOMERY COUNTY, Md. (FOX 5 DC) - At least one area police chief tells FOX 5 that he is planning to implement a new policy that would also hold complicit officers accountable.

“We’ve got to do our best to protect the citizen’s rights and to make sure that there’s again no other types of crimes or even misconduct that’s being conducted by officers at that time so yes we’re going to hold our officers accountable to that,” Montgomery County Police Chief Marcus Jones said on Monday.

The recently nominated police department head is one of a couple Black police chiefs in the greater Washington D.C. area. While the protests in Montgomery County have not taken the same turn as some of the demonstrations in D.C. since Friday, many Montgomery County residents have said they have been participating in weekend protests in the District.

As a leader in the African American community and an officer behind the badge, FOX 5 also asked what Jones made of the more violent actions and rioting seen in the nation’s capital.

“To me, that is unacceptable in our society. I don’t care how people say, people are frustrated, we get that. But there are other ways to vent your frustrations and take that out on innocent business owners and communities that will have to rebuild as a result of this,” he said. Jones is very aware of the complications of videos that show officers across the country acting aggressively toward protesters. 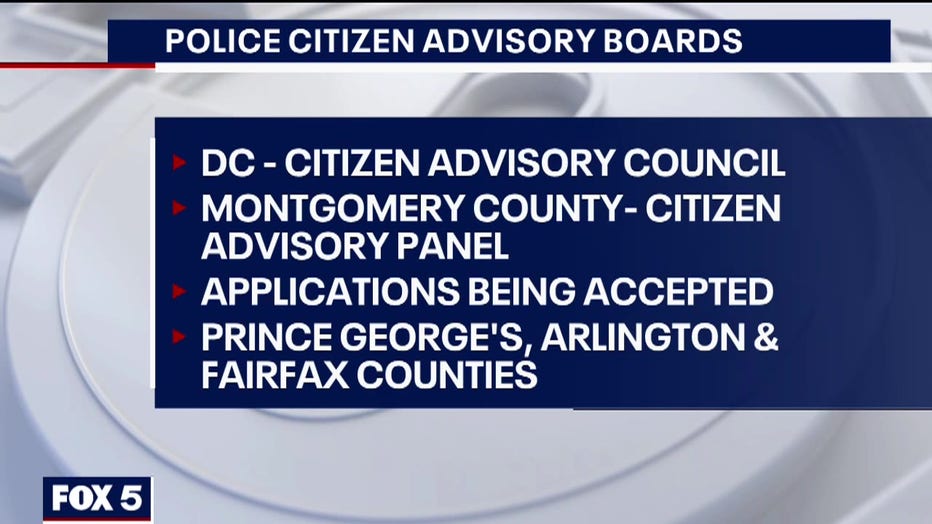 There’s also powerful images, like one shared by MyMcMedia this weekend showing what appears to be a white Montgomery County Police officer kneeling at a weekend protest held in Germantown, MD.

“As we move forward, that’s the thing that I’ve really talking to our officers about. We’re not here to create the moment. This is not our time, right? This is not something that we need to go off and show the world, you know, how big and bad the police department is. Our goal is to show the world and particularly our community that we are partners in keeping a safe place,” said Jones.

These protests are calling for a change in how police departments treat African Americans and communities of color.

FOX 5 reached out to a few area police departments to find out what has or will be done to address some of the community frustration.

Looking at Police Community Advisory boards, for example, most area departments have some form of ones. Montgomery County is still accepting applications for theirs.

What about public access to officer records? Virginia, Maryland and D.C. treat officer records as employee personnel records - they are mostly restricted to the public. Change would need to come from top down.

There are electronic “early warning systems” that some internal review departments use. This is a program that tracks an officer’s incidents and flags them for hire-ups if, say, there are too many complaints against an officer and a hire-up need to address to address this with them.

FOX 5 is still waiting for a few departments to respond, but Fairfax County, Arlington County Police and Montgomery Police did confirm by Monday afternoon, they have this type of program.

On Monday in Gaithersburg, Maryland a peaceful protest that included a couple hundred adults and teens - even some children - marched through Gaithersburg for at least two hours as tensions heated again for the fourth day in a row outside of the White House.

Chief Jones told FOX 5 before the Friday action began, he agreed with the Chief of Police in Minneapolis, who said over the weekend he believes in George Floyd’s attest, the four other officers who did not intervene are just as responsible.

Jones commented on George Floyd’s arrest but Montgomery County, there was also an officer charged after forcefully kneeing a man in the head while that man was in custody in the ground in July of last year. Jones says they still have to go through the administrative process in this case. MCP cannot start that process until sentencing is complete.

On potential future policy, Jones said, “My hope is that the union will see the benefit in what the community has demanded and that they’re going to work with us hand in hand to create this policy, that will be fair.”

The police chief confirmed he would be the one to create this policy and it is not retroactive. It cannot be applied to incidents that happen before a new policy is adopted.

Multiple officers in and around the Montgomery County area cannot speak on camera without department permission but have voiced anger over Minneapolis Derek Chauvin did and what his colleagues didn’t do.

Several officers have expressed off camera, they want department issues to be resolved, noting the “bad apples” paint an entire department under a bad brush and also put their lives at risk.

Fairfax County Police in response to what actions they have taken to further transparency and strengthen community-police relations:

"It is the policy of the Fairfax County Police Department to embrace openness and transparency as core principles and commit to a predisposition to disclose information in a timely manner. These principles and commitments underpin our ability to be held accountable and to sustain community trust and confidence in the performance of our critical mission. Keeping the community informed with openness, transparency and in the spirit of maximum disclosure with minimum delay will be balanced against the need to protect public safety, due process, law enforcement and criminal investigation and prosecution requirements. Finally, the Department complies with the Virginia Freedom of Information Act."

Alexandria City Police in response to what actions they have taken to further transparency and strengthen community-police relations:

"Community engagement is one of the agency’s three key initiatives. We have a Community Resources Section which is committed to being actively engaged with the Arlington Community. We participate in  several  outreach initiatives to ensure that we are meeting the community’s needs.  For example, each fall, the department hosts a Citizen’s Police Academy  to  inform and educate  residents  on  how the Arlington County Police Department operates and its role in the community.  To further engage with the community,  our officers attend civic association meetings,  special events, host a popular Coffee with a Cop series and conduct seasonal donation drives. The unit  provides training to community groups, businesses and faith based organizations on topics such as: Fraud prevention, Active Shooter Training, See Something, Say Somethingand Risks, Hazards and Vulnerabilities in the House of Worship. Additionally, in 2019, recognizing the business community has unique public safety concerns, the department created a Business Outreach Unit. That unit seeks to foster an open dialogue about the public safety concerns of the business community and develop strategies and training to meet their needs."