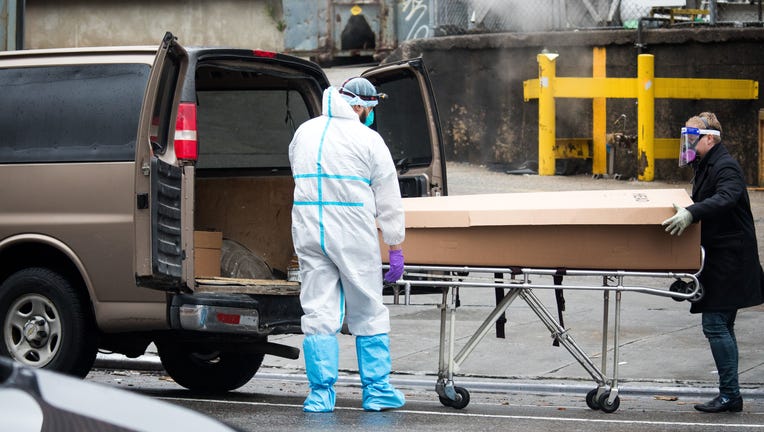 (Photo by Michael Nagle/Xinhua via Getty) (Xinhua/ via Getty Images)

There’s a reason why some people believe government officials are exaggerating the number of COVID-19 fatalities.

One problem is the hodgepodge way states tally those numbers, Fox News has found.

“I think a lot of clinicians are putting that condition (COVID-19) on death certificates when it might not be accurate because they died with coronavirus and not of coronavirus,” Macomb County, Mich., Chief Medical Examiner Daniel Spitz in an interview with the Ann Arbor News last month.

The doctor also said he believes there are people who died of COVID-19, but weren't counted. Determining a COVID-19 death is based on each doctor's best clinical impression and that varies, he said.

“There’s no uniformity,” he said.

The debate over whether the COVID-19 death count has been exaggerated has intensified as deaths from the virus continue to rise at a steady and alarming rate.

As of Friday, there were 85,974 deaths due to COVID-19 in the United States, according to Johns Hopkins University data. The Centers for Disease Control and Prevention was reporting 83,947 COVID-19 deaths on Friday.

On Wednesday, a report said President Trump and members of the White House Coronavirus Task Force are pushing the CDC to revise the way it counts coronavirus deaths. That change could lead to far fewer deaths being counted.

Trump has privately questioned the number of COVID-19 deaths as the death toll surpassed the 80,000 mark this week, suggesting it may be incorrect or inflated by the current methodology, the Daily Beast reported.

Three administration officials said Deborah Birx, the task force response coordinator, has urged the CDC to exclude from the death count some who were presumed infected, but did not have a confirmed lab result and those who had the virus but might not have died as a direct result of it, according to the news outlet. 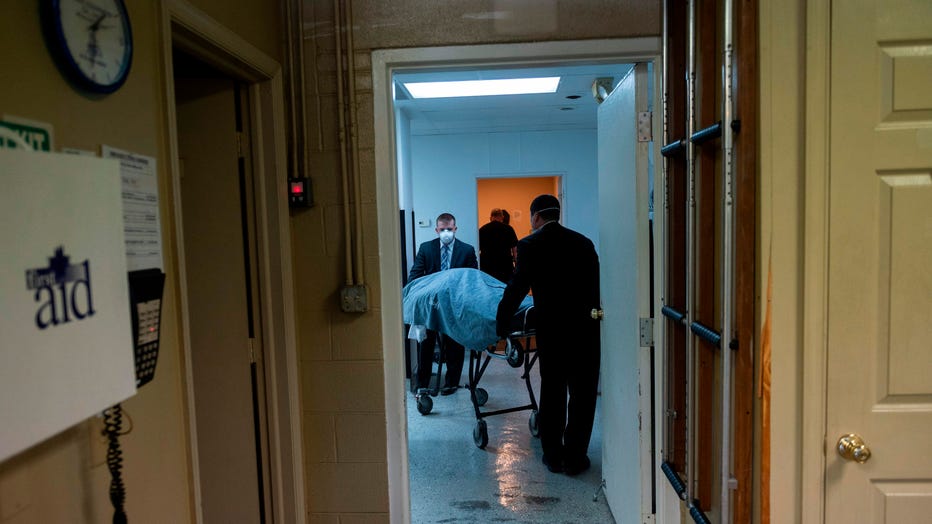 Funeral home staff use a gurney to transport the body of a COVID-19 victim at the Stauffer Funeral Homes in Frederick, Maryland, on May 1, 2020. (Photo by ANDREW CABALLERO-REYNOLDS/AFP via Getty Images)

Last week, The Washington Post reported that at a recent discussion on COVID-19 data, Birx told CDC Director Robert Redfield that “there is nothing from the CDC that I can trust.”

According to the paper, Birx and others feared the CDC was inflating coronavirus statistics, like mortality rates and case numbers, by up to 25 percent.

But not everyone shares the view that COVID-19 deaths are being overcounted.

He pointed to the situation in New York City at the peak of the outbreak. New York now has more than 27,000 COVID-19 deaths. 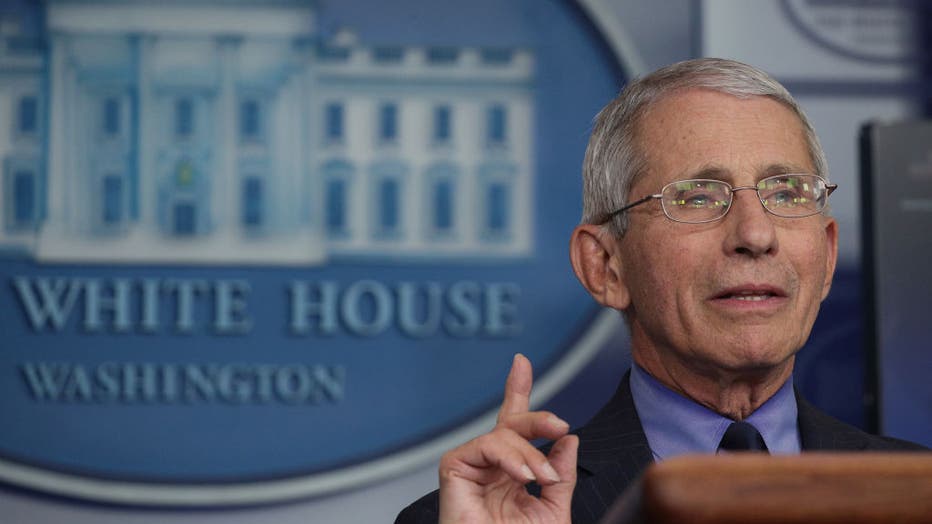 “That there may have been people who died at home who did have COVID, who were not counted as COVID because they never really got to the hospital,” Fauci testified.

And other experts have said the COVID-19 death toll hasn't captured all those who died of the virus because there still isn't enough testing being done, especially in nursing homes, where the virus attacks vulnerable elders with underlying medical conditions.

Additionally, the CDC found Monday that the number of excess deaths in New York City during the pandemic suggests an undercount of 5,000 coronavirus deaths.

Last month, Factcheck.org debunked claims that hospitals were inflating the number of COVID-19 cases and deaths so they can be paid more from Medicare.

Those claims arose because hospitals can charge Medicaid and Medicare an extra 20 percent for treating a COVID-19 under the CARES Act approved by Congress to deal with the coronavirus pandemic.

“There’s an implication here that hospitals are over-reporting their COVID patients because they have an economic advantage of doing so, [which] is really an outrageous claim,” UCLA senior fellow Gerald Kominski told the fact-checking site.

He said any suggestion that patients may be put on ventilators out of financial gain, not medical need, “is basically saying physicians are violating their Hippocratic Oath … it would be like providing heart surgery on someone who doesn’t need it.”

Hospitals have another motive not to inflate COVID-19 death numbers. If the numbers don’t add up, they could expose themselves to Medicare audits, and civil and criminal penalties.

Illinois has been accused of skewing its COVID-19 death count. The CDC on Friday reported 3,792 coronavirus deaths in Illinois, which has been hard hit by the pandemic.

In April, the state’s Director of Public Health Dr. Ngozi Ezike told a coronavirus news briefing that the state’s COVID-19 death toll was counting those who died of “a clear alternate cause” but had the virus at the same time.

“So, everyone who's listed as a COVID death doesn't mean that that was the cause of the death, but they had COVID at the time of the death,” she said.

"You could be driving home and be in an auto accident and die from that," Darren Bailey, a Republican Illinois lawmaker suing Gov. JB Pritzker to reopen the state, told WAND-TV on Monday. "And if you had COVID-19 in your system, that death gets labeled as COVID."

The next day, Ezike offered clarification. She told reporters that Illinois was not counting those whose COVID-19 infection had nothing to do with their death.

“We are trying to make sure that things that aren’t related at all to the COVID diagnosis are removed, but if someone has another illness, like heart disease, and then had a stroke or other event, it’s not as easy to separate that and say COVID didn’t exacerbate that existing illness. That would not be removed from the count,” she said.

NYC CORONAVIRUS DEATHS MAY BE UNDERREPORTED BY MORE THAN 5,000, CDC

The state’s health department said it tracks those deaths, but isn't reporting them.

“Some of those pan out to be actual cases or some of them don’t,” state Health Commissioner Lisa Piercey told reporters at a coronavirus briefing on April 29.

Colorado counted a man who a county coroner said died of acute alcohol poisoning as a COVID-19 death.

Montezuma County Coroner George Deavers told the Durango Herald the man’s blood-alcohol level was 0.55, or almost seven times the legal driving limit of 0.08 in Colorado. A BAC of 0.3 is considered lethal.

“COVID was not listed on the death certificate as the cause of death,” Deavers said, the paper reported Wednesday. “I disagree with the state for listing it as a COVID death, and will be discussing it with them this week.”

News reports have identified the man as Sebastian Yellow, 35, and reported that he was found dead by police May 4.

The Montezuma County Public Health Department also was refusing to report Yellow's death as a COVID-19 death. “The state is reporting that death as a COVID death, but our health department wanted to let people know that even though the person did have the virus, they did not die from it.”

In response to a request for comment about Yellow’s death, the Colorado Department of Health told KCNC-TV that it classifies a death as confirmed when there is a positive SARS-CoV-2 (COVID-19) laboratory test.

Last month, the same agency reclassified three deaths at a Centennial nursing home as COVID-19 deaths, challenging the findings of attending physicians who ruled the deaths were unrelated to the virus.

The deaths occurred at Someren Glen, where four other residents died of COVID-19. The state has now recorded all seven deaths as COVID-19 deaths.

A health department spokesman told the station of those deaths that the agency was following CDC guidance.

“When a person with a lab-confirmed case of COVID-19 dies, their death is automatically counted as a COVID-19 death unless there is another cause that completely rules out COVID-19, such as a fatal physical injury,” the spokesman said. “A pre-existing illness would not rule out COVID-19.”

But despite testing positive for the virus, VanBuren, who lived alone, was looked after by neighbors who said his death was from cancer and kidney failure, not COVID-19, according to MustReadAlaska, a news blog.

“People want accountability and answers because there is so much confusion and upset in our daily lives with the coronavirus,” Vance told Fox 4 Anchorage on May 11.

Zink replied that “when we have a case that is positive and a person that has passed away our process is to go to the clinician and asked specifically if they think this was related. If they say yes, then we report it out to you.”

In Arkansas, where 97 COVID-19 deaths have been reported, the count includes a woman who died at a nursing home in April.

But KTHV-TV reported interviewing the woman’s daughter, who had questions about including her mother in the count.

"My mother was 91 when she passed,” the daughter, who requested anonymity, said. “She had been in hospice since January. I feel the diagnosis of 'respiratory failure due to COVID-19' is not true. To add a death due to the virus just to inflate the numbers is not right."

CORONAVIRUS: WHO IS MOST AT-RISK?

She added, "I could see why people would not want to consider that as the primary cause of death. That person was already frail, near the end of their life and they were in hospice for other reasons, so this was likely a complicating factor. But likely, the other reason would have caused the death."

In Virginia, there have been 955 COVID-19 deaths. The count includes Garry Lee Burner, 63, of Woodford, who died May 7 at home.

Burner worked until he got sick in April. He was hospitalized, then discharged with an oxygen tank. A second test in the hospital confirmed he had the virus.

“I just can’t stand the fact of people saying he died from this virus,” Robin Burner told The Free Lance-Star in Fredericksburg. “Yes, he had it and it probably made him weaker, but in my heart, I don’t think that’s what he died of. I think he had a heart attack.”

“I will not just stand by and let his death be another statistic,” she was also quoted as saying.