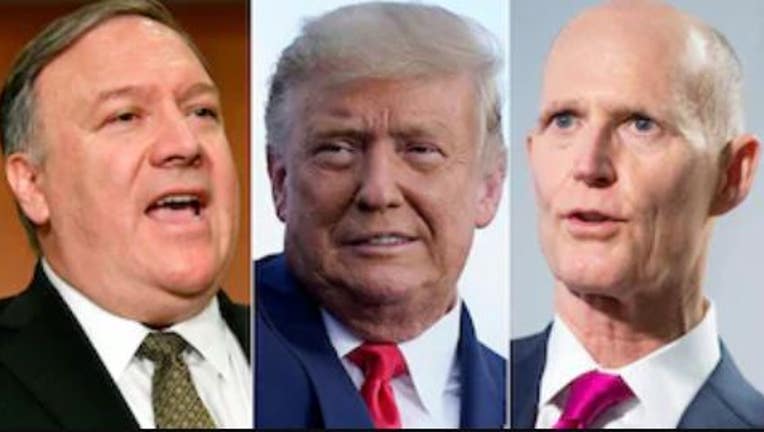 Donald Trump might not be the only one with an eye on 2024.

Former Secretary of State Mike Pompeo heads to Iowa next week to advocate on behalf of conservatives.

The trip by Pompeo, the former congressman from Kansas who served as CIA director in the Trump administration before becoming America’s top diplomat, will be the first in-person visit by a potential 2024 GOP White House hopeful to one of the early voting states in the presidential nominating calendar.

Pompeo's trip includes a stop at the Westside Conservative Club in Urbandale on Friday morning.

Sens. Rick Scott of Florida and Tim Scott of South Carolina, who may also have national aspirations, head to Iowa next month to headline state GOP events.

Rick Scott, who’s traveling to the Hawkeye State in his role as chair of the National Republican Senatorial Committee -- which is the reelection arm of Senate Republicans -- will be in Cedar Rapids on April 1 for an event organized by the Iowa GOP.  Tim Scott will speak at another Iowa GOP gathering in Davenport on April 15.

While the conventional wisdom is that Trump’s flirtations with another White House run in 2024 could be freezing the field a bit, it appears his figurative presence is not preventing other potential nomination contenders from taking early steps.

Eight years ago, when the GOP was in the similar situation of being the party out of power in the White House, there were 42 visits by possible 2016 Republican contenders to Iowa, New Hampshire and South Carolina -- the first three states to hold contests in the GOP nominating calendar. But only four of those trips came during the first four months of 2013.

"I have probably had more interest in our regional events than I have had the previous two presidential cycles that I have been the chair," longtime Iowa GOP chair Jeff Kaufmann told Fox News.

"I would say there’s a lot more interest here than meets the eye," Kaufmann said, teasing that there could be plenty more visits by possible 2024 contenders to come this year. "I’m not toying with you. Stay tuned."

A week after he’s in Iowa, Pompeo is set to headline a virtual fundraiser for the New Hampshire GOP. And Sen. Tom Cotton of Arkansas, another politician on the long list of potential Republican 2024 hopefuls, spoke remotely last month at the state party's virtual winter meeting.

Stepanek points to the calendar – and to the coronavirus pandemic – for the lack of in-person early state visits so far.

"It’s wicked early and I think a lot of people are stymied because of the COVID lockdowns," Stepanek told Fox News.

Asked if Trump’s potential 2024 presidential bid is also putting a freeze on early state visits so far by other White House hopefuls, he said it’s too early to tell. "If it’s like this in a year, then I would say it’s Trump," added Stepanek, who chaired Trump’s 2016 campaign in New Hampshire.

Trump predicted during a speech last month at the Conservative Political Action Conference (CPAC) that in 2024 "a Republican president will make a triumphant return to the White House." And teasing a potential run, he asked, "I wonder who that will be?"

Later in his speech, Trump once again falsely claimed he won last November’s presidential election and triggered an explosion of applause and cheers among the crowd in Orlando, Florida, when he said of the Democrats, "who knows … I may even decide to beat them for a third time."

This past week, in an interview on "Fox News Primetime," the former president once again teased a potential 2024 campaign and hinted that "we'll make our decision after" the midterm elections. 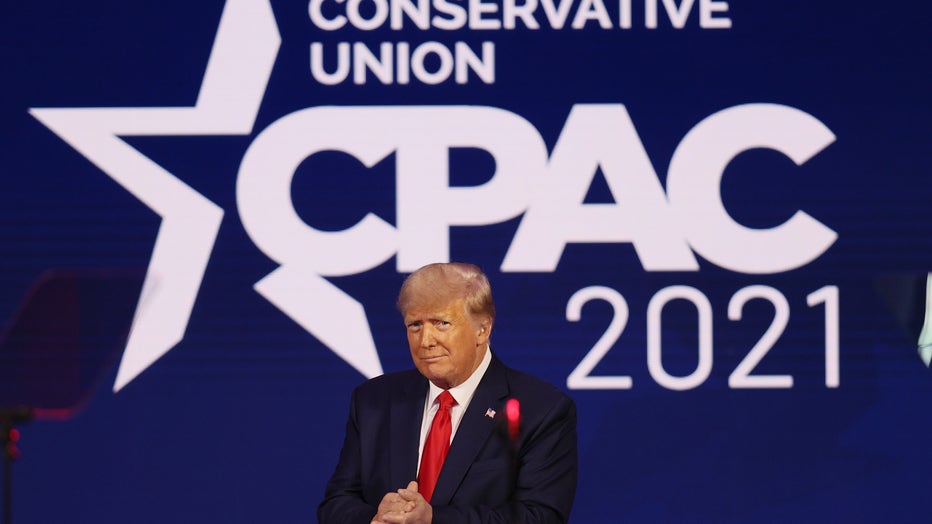 Trump remains the dominant force in the GOP and the most popular figure among Republican voters. The early data clearly shows that if the nomination race were held today, the former president would be the overwhelming favorite.

"I think the elephant in the room is obviously Donald Trump," veteran GOP pollster Neil Newhouse recently told Fox News. "If the election were held today and if he wants the nomination, he’d be the odds-on favorite."

Republican strategist and GOP presidential campaign veteran Alex Conant told Fox News that "nobody wants to be the first candidate to challenge Trump in 2024. If it were truly an open race, you’d see a lot of potential candidates making some aggressive early moves, going to Iowa, New Hampshire."

"Potential 2024 candidates don’t want to talk about Donald Trump. They want to talk about themselves," he pointed out. "But so long as he is making noises about running again, the race will be all about him. And these candidates will be less inclined to do the early state travel because it will all be in the shadow of whether or not Trump runs again."

Longtime GOP consultant David Carney agreed that with the president mulling a bid to return to the White House, it’s a far different scenario than the wide-open fields for the GOP presidential nominations in 2008, 2012 and 2016 were, respectively.

But Carney, a veteran of Republican presidential campaigns for three decades, said: "I don’t think any serious candidate would be scared off because it’s four years. No one knows what’s really going to happen with the president. I don’t see it having much affect right now."

While the early state stops have been limited to date, there’s plenty of action going on behind the scenes.

"A lot of potential 2024 candidates are picking up friends in the ultra-activist category. They’re not making waves, they not making news headlines, they just talking on the phone and communicating, getting things set up," New Hampshire Institute of Politics Executive Director Neil Levesque said. "There’s not a lot of activity specifically on the ground that voters can touch."

The institute’s "Politics and Eggs" speaking series has long been a must-stop for White House hopefuls in New Hampshire, and Levesque said he’s "getting questions regarding what kind of platforms we have. What kind of opportunities, all of which we’re entertaining."

"I would expect post-COVID, once we can do in-person events, things will really start to heat up," he added.

And Kaufmann's pitch to potential 2024 GOP contenders? "Come to Iowa, come often, and by golly, I’ll find a crowd for you to talk to."