Maricopa County officials say they have identified a solution after about 20% of their polling sites were experiencing issues with tabulation machines across the Valley, just hours into Election Day. Board chairman Bill Gates speaks with LiveNOW about the issue, and solution.

PHOENIX - Arizona Democrats maintained small but dwindling leads over their Republican rivals in the races for U.S. Senate and governor, contests that could determine control of the Senate and the rules for the 2024 election in a crucial battleground state.

The races remained too early to call two days after the election, with some 600,000 ballots left to count, about a quarter of the total cast.

Protracted vote counts have for years been a staple of elections in Arizona, where the overwhelming majority of votes are cast by mail and many people wait until the last minute to return them. But as Arizona has morphed from a GOP stronghold to a competitive battleground, the delays have increasingly become a source of national anxiety for partisans on both sides.

After opening big leads early on election night, when only mail ballots returned early were reported, Democrats have seen their leads dwindled as more Republican ballots have been counted. On Thursday morning, Democrats led in the races of Senate, governor, secretary of state and attorney general. It could take several days before it's clear who won some of the closer contests.

With Republicans still in the hunt, it remained unclear whether the stronger-than-expected showing for Democrats in much of the U.S. would extend to Arizona, a longtime Republican stronghold that became a battleground during Donald Trump's presidency.

READ MORE: 2022 Election: Why is it taking so long for Arizona to count ballots?

The GOP nominated a slate of candidates who earned Trump's endorsement after falsely claiming his loss to President Joe Biden was tainted.

Among them former television news anchor Kari Lake was about half a point behind Democratic Secretary of State Katie Hobbs in the race for governor, a contest that centered heavily on Lake's baseless claims of fraud in the 2020 election. The Republican candidate for attorney general also trailed narrowly.

Democrats had more comfortable 5-point margins in the races for U.S. Senate and secretary of state, but with so many ballots outstanding, the races were too early to call.

In the race for attorney general, Republican Abraham Hamadeh took the lead from Democrat Kris Mayes.

Officials in Maricopa County, the state's most populous, said about 17,000 ballots were affected by a printing mishap that prevented vote-counters from reading some ballots, a problem that slowed voting in some locations and infuriated Republicans who were counting on strong Election Day turnout. County officials said all ballots will be counted but gave no timeline for doing so. 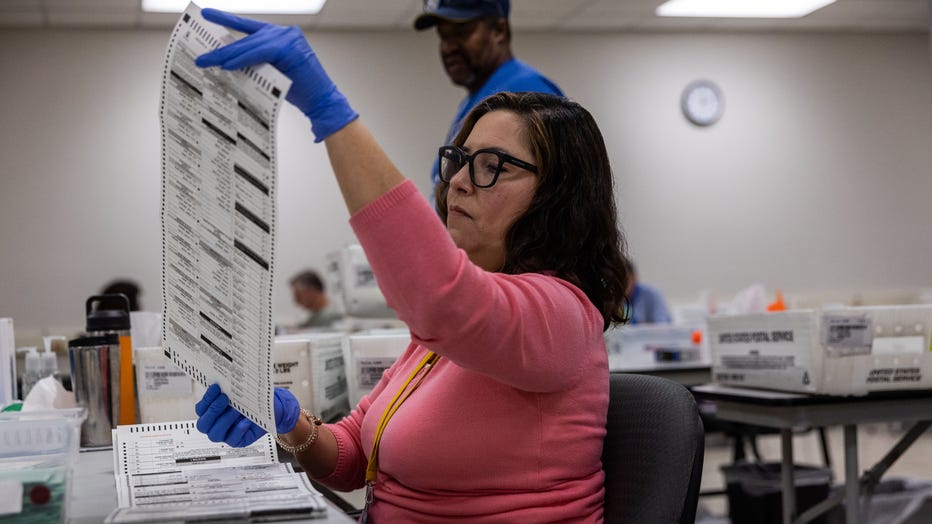 The cause remains a mystery. The two top officials on the county board of supervisors, both Republicans, said in a statement Wednesday night that they used the same printers, settings and paper thickness during the August primary and pre-election testing, when there were no widespread issues.

"There is no perfect election. Yesterday was not a perfect election," said Bill Gates, chairman of the board of supervisors, told reporters earlier in the day. "We will learn from it and do better."

Lake repeated her pledge to immediately call lawmakers into special session upon being sworn in to make massive changes to Arizona election laws. She wants to significantly reduce early and mail voting, options chosen by at least 8 in 10 Arizona voters, and to count all ballots by hand, which election administrators say would be extremely time consuming.

Ballots can have dozens of races on them. Maricopa County has more than 50 judges on the ballot, on top of state and local races and 10 ballot measures.

"We’re going to go back to small precincts where it’s easier to detect problems and easier to fix them and it’ll be easier to hand count votes as well," Lake told Fox News host Tucker Carlson Wednesday night. "These are some of the things I’d like to see happen. I’ll work with the Legislature."

A political urban-rural divide was evident among Arizona voters.

Democrats Katie Hobbs and Sen. Mark Kelly each drew support from nearly two-thirds of urban voters, according to AP VoteCast, an expansive survey of more than 3,200 voters in Arizona.

Suburban voters split about evenly between the two Democratic candidates and their GOP rivals, Kari Lake and Blake Masters. Small town and rural voters were more likely to favor Lake and Masters.

Meanwhile, Republicans who control the three-member board of supervisors in southeastern Arizona’s GOP-heavy Cochise County voted Wednesday to appeal a judge’s decision that blocked them from hand-counting all the ballots, which are also being tabulated by machines.

The efforts to hand-count ballots in the county and elsewhere across the nation are driven by unfounded concerns among some Republicans that problems with vote-counting machines or voter fraud led to Trump’s 2020 defeat.

A judge said the plan ran afoul of state election law that limits hand counts to a small sample of ballots, a process meant to confirm the machine count was accurate.