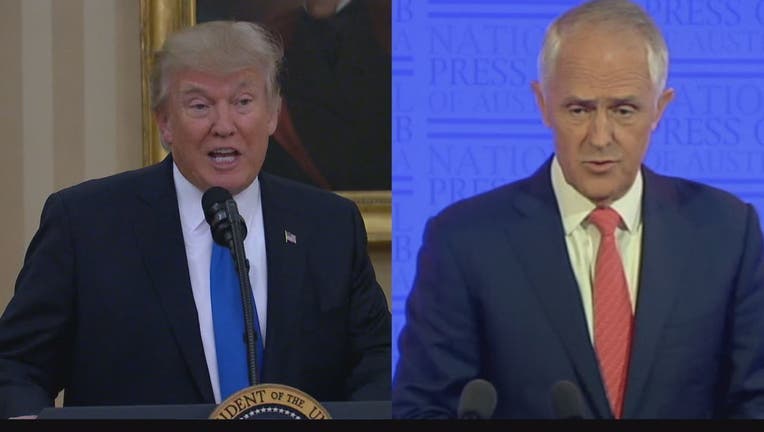 SYDNEY - (AP) -- For decades, Australia and the U.S. have enjoyed the coziest of relationships, collaborating on everything from military and intelligence to diplomacy and trade. Yet an irritable tweet President Donald Trump fired off about Australia and a dramatic report of an angry phone call between the nations' leaders proves that the new U.S. commander in chief has changed the playing field for even America's staunchest allies.

Prime Minister Malcolm Turnbull was left scrambling to defend his country's allegiance to the U.S. after The Washington Post published a report on Thursday detailing a tense exchange that allegedly took place during the Australian leader's first telephone call with Trump since he became president. During the call, the Post reported, Trump ranted about an agreement struck with the Obama administration that would allow a group of mostly Muslim refugees rejected by Australia to be resettled in the United States. The newspaper said Trump dubbed it "the worst deal ever" and accused Turnbull of seeking to export the "next Boston bombers" - a reference to Tamerlan and Dzhokhar Tsarnaev, U.S. citizens born in Kyrgyzstan who set off explosives at the 2013 Boston marathon.

Though Turnbull declined to confirm the report, he also didn't deny it, apart from rejecting one detail - that Trump had hung up on him. The prime minister insisted his country's relationship with the U.S. remained strong, and that the refugee deal with the U.S. was still on.

Yet shortly after, Trump took to Twitter to slam the agreement, tweeting: "Do you believe it? The Obama Administration agreed to take thousands of illegal immigrants from Australia. Why? I will study this dumb deal!"

Trump's tweet overstated the number of people involved. The U.S. agreed to take some of about 1,670 asylum seekers.

Australians, long accustomed to a chummy friendship with the U.S., were stunned by the drama. Not since the Vietnam War - when Australia's then-Prime Minister Gough Whitlam criticized a series of bombings authorized by then-President Richard Nixon - has there been such obvious friction between the leaders of the two nations.

"You can't help but think the signal this sends to world leaders: That you have to be very, very careful doing business with this administration, particularly with the president and the people around him," said Simon Jackman, CEO of the U.S. Studies Center in Sydney. "And that can't help but put a chill on relations between allies."

Yet the only surprising thing about Trump's reaction to the deal is that Australians were surprised at all, said Nick Economou, a political analyst at Monash University in Melbourne. Members of Turnbull's conservative party probably assumed - perhaps naively - they still had a special relationship with conservatives in the U.S., based on the close ties the parties enjoyed during previous administrations. But if Trump has taught the world anything, Economou said, it's that he has little patience for tradition.

"I suspect that there is a feeling that, 'Oh no, we've dealt with Republicans before, we were very close to George W. Bush, we should be fine with Mr. Trump and he'll agree to this deal,'" Economou said. "But the thing is, of course he's not going to agree to this deal! Obama entered into it and whatever Obama was for, Donald Trump is against."

Australia has long been one of America's strongest allies. The nation has fought alongside the U.S. in every major conflict since World War I, including the Korean War, Vietnam War and, more recently, in the Middle East. Australia is also part of the "Five Eyes" intelligence-sharing program with the U.S., along with Canada, Britain and New Zealand.

And while few believe the spat over the refugee deal will permanently damage those ties, it will likely prompt changes in how America's allies approach their dealings with Washington.

The businessman-turned-president's response - lashing out at a deal that had already been on the table - could be a negotiation tactic he is borrowing from his days in real estate, said Norman Abjorensen, a political analyst at the Australian National University. And like it or not, he said, it's a tactic Australia may need to accept.

"The way of doing business - Australia's going to have to adjust to it," Abjorensen said. "There's not going to be adjustments at the other end, for sure. The wind has shifted quite dramatically."

But while politicians may be able to adjust to Trump's whims, the Australian public may not be so forgiving, Abjorensen said.

"People are going to read this and think, 'Hang on, this is something a little bit different. Doesn't he like us? What's changed?'" Abjorensen said. "It might bring about a gradual rethinking of the relationship, certainly at the level of the people."

Despite the drama, Turnbull insisted that his country remained loyal to the U.S, calling the relationship "rock solid."

"Our alliance is built on commitments on service, on courage, on partnership of millions of Australians and Americans going back generations," Turnbull told Melbourne radio station 3AW. "And it will continue and strengthen during my time as prime minister and I'm sure President Trump's time as president."

Still, despite the upbeat message Turnbull delivered publicly, most analysts suspect he - like most Australians - was left stunned by the slight.

"I think Mr. Turnbull has come across something he's probably never encountered before in his political career, his legal career or his business career. The 'Trump experience,' day one!" Abjorensen said with a laugh. "This is how you treat your friends? Heaven help those who are a little bit further down the list of being in favor."

EDITOR'S NOTE: Kristen Gelineau, The Associated Press bureau chief for Australia, New Zealand and the South Pacific, has reported from Australia since 2008.

EDITOR'S NOTE: Kristen Gelineau, The Associated Press bureau chief for Australia, New Zealand and the South Pacific, has reported from Australia since 2008.