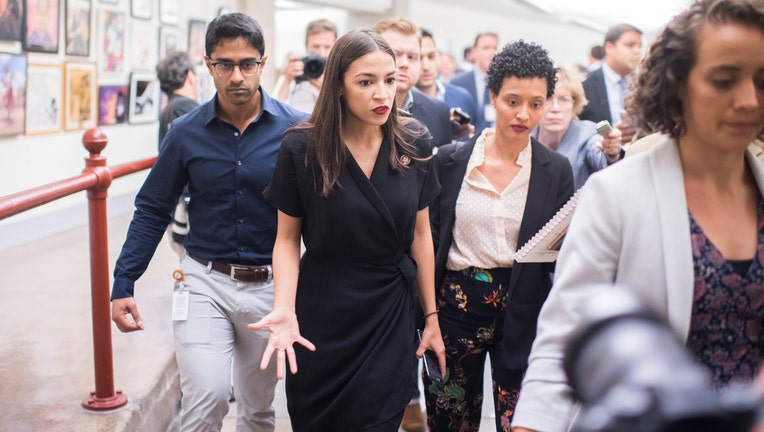 Rep Alexandria Ocasio-Cortez, D-N.Y., leaves a news conference in the Capitol Visitor Center after responding to negative comments by President Trump that were directed at the freshman House Democrats on Monday, July 15, 2019. Her chief of staff, Sai (Tom Williams/CQ Roll Call)

WASHINGTON - The controversial chief of staff for Rep. Alexandria Ocasio-Cortez, D-N.Y., who resigned on Friday is currently being investigated by federal officials, a new report says.

Saikat Chakrabarti faced a complaint filed with the Federal Election Commission in March for alleged violations having to do with illegal fundraising. An investigation is currently underway, sources told the New York Post. According to the FEC, complaints only lead to investigations if there is enough evidence for them to believe there may have been a violation.

“Upon finding reason to believe that a violation has occurred or is about to occur, the Commission may authorize an investigation,” an FEC enforcement guidebook says.

The investigation is reportedly related to Brand New Congress and Justice Democrats, two PACs Chakrabarti started to back progressive candidates. The March complaint alleged that the groups funneled more than $885,000 to the similarly named Brand New Campaign LLC and the Brand New Congress LLC -- companies controlled by Chakrabarti that, unlike PACs, are exempt from reporting all of their significant expenditures. The PACs claimed the payments were for "strategic consulting."

Chakrabarti and Ocasio-Cortez were hit with another complaint in April over accusations that they used Brand New Congress LLC to illegally provide in-kind political contributions by offering consulting services for cheap rates, operating at a loss by only charging candidates a portion of the costs.

Federal officials are also looking into Chakrabarti’s salary from Ocasio-Cortez, the Post reported. The independently wealthy aide earned $80,000, as opposed to the average of $146,830. This not only allowed junior staff members to get a pay bump, it let Chakrabarti avoid requirements to reveal outside income, which only kick in for those earning at least $126,000.

The FEC did not immediately respond to Fox News’ request for comment, and Chakrabarti could not be reached. A statement from Ocasio-Cortez's office announcing Chakrabarti's departure said he was leaving in order to take a new role at the non-profit group New Consensus to help with work on a Green New Deal.

Earlier this summer, Chakrabarti put himself at the center of a rift in the Democratic Party, with Ocasio-Cortez and Reps. Ilhan Omar, Ayanna Pressley, and Rashida Tlaib on one side, and the party’s establishment led by House Speaker Nancy Pelosi on the other.

HOUSE DEMOCRATIC CAUCUSE RIPS AOC’S CHIEF OF STAFF FOR CRITICIZING LAWMAKER: ‘KEEP HER NAME OUT OF YOUR MOUTH’

In June, he criticized Rep. Sharice Davids, D-Kansas, for her votes on issues to do with the migrant crisis at the border.

The caucus Twitter account reacted by saying, "Who is this guy and why is he explicitly singling out a Native American woman of color?” an apparent reference to how Ocasio-Cortez accused Pelosi of singling out women of color by making comments about her and the other progressive freshman congresswomen.