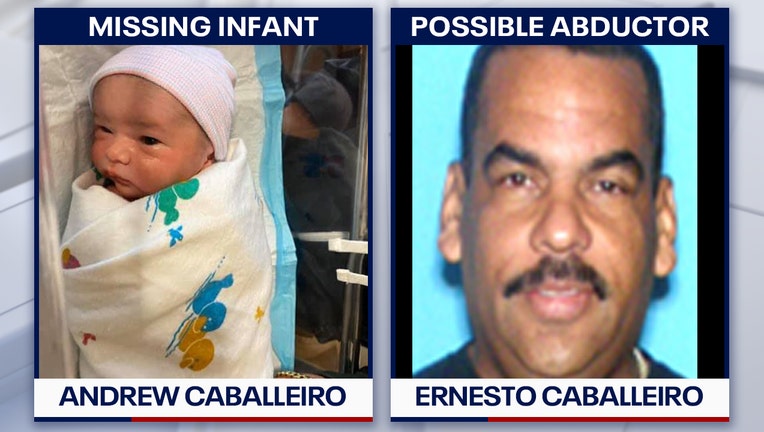 Amber Alert issued for one-week-old Andrew Caballeiro who may be with his father, Ernesto Caballeiro. Police are concerned for their welfare. (Miami-Dade Police Department)

MIAMI, Fla. - EDITOR'S NOTE: Caballeiro has since been found dead in Pasco County but the baby is still missing. Read the updated story here.

An Amber Alert was issued in Florida as police in Miami-Dade County search for a newborn who may be with his father.

According to WSVN, three women were found dead inside a home in Southwest Miami-Dade County. Police said 49-year-old Ernesto Caballeiro lived in the home where the victims were found. They are searching for him, and his 1-week-old son, Andrew.

Miami-Dade police said they are asking for help in finding them “out of concern for their welfare.” Police did not provide details on custodial rights.

Andrew was last seen Tuesday in the 21900 block of Southwest 187th Avenue in Miami, Florida, which is where the triple murder occurred. Police believe he could be with Ernesto, who is described as a Hispanic male, 5 feet 7 inches tall, weighs 240 pounds and has black hair and brown eyes.

Andrew is described as a Hispanic male, 20 inches tall, weighs 7 pounds, and has black eyes.

The Amber Alert was issued Wednesday morning by the Florida Department of Law Enforcement. Miami-Dade police said they performed a welfare check before 4:45 p.m. Tuesday when they found the three deceased adult women in the home. Investigators said they all had been shot.

It’s unknown, according to WSVN, whether the three women were related. The call for a welfare check came from a family member. When the relative tried calling and didn’t receive a response, that individual arrived at the home, found the bodies and contacted police.

The individual who called for the welfare check has not been identified. Detectives said Ernesto lived in the home where the murders took place and is related to at least one of the victims. Police are not calling him a suspect or a person of interest.

If anyone sees them, police ask that you do not approach them. Instead, call 911 immediately.

Anyone with information on their whereabouts can call the Miami-Dade Police Department at 305-471-2400 or dial 911.