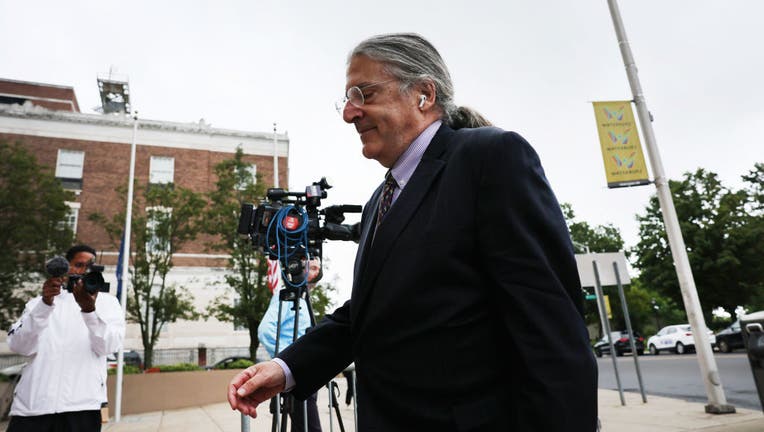 WATERBURY, CONNECTICUT - SEPTEMBER 13: The lawyer for Alex Jones, Norman Pattis, enters Waterbury Superior Court during the start of the trial against Jones who called the 2012 Sandy Hook shooting a hoax, on September 13, 2022 in Waterbury, Connectic

HARTFORD, Conn. - A lawyer for conspiracy theorist Alex Jones has been suspended from practicing law in Connecticut for six months for improperly giving other Jones’ attorneys in Texas confidential documents, including the medical records of relatives of victims of the Sandy Hook Elementary School shooting.

The ruling by Judge Barbara Bellis on Thursday afternoon came in the families’ lawsuit against Jones for repeatedly calling the shooting a hoax on his Infowars show, which resulted in Jones being ordered to pay more than $1.4 billion in damages after a jury trial in Connecticut last year.

Bellis said New Haven-based lawyer Norm Pattis failed to safeguard the families’ sensitive records in violation of her order that limited access to the documents to attorneys in the Connecticut case. She called his actions an "abject failure" and "inexcusable."

"We cannot expect our system of justice or our attorneys to be perfect, but we can expect fundamental fairness and decency," the judge wrote. "There was no fairness or decency in the treatment of the plaintiffs’ most sensitive and personal information, and no excuse for the respondent’s (Pattis’) misconduct."

Jurors ordered conspiracy theorist Alex Jones on Wednesday to pay nearly $1 billion to Sandy Hook Elementary School shooting victims’ relatives and an FBI agent, who said he turned their loss and trauma into years of torment by promoting the lie that the rampage was a hoax.

Pattis said Friday in a text message that he plans to appeal the discipline and seek a stay of the punishment while he challenges it.

"We’re looking forward to appellate review," he wrote in a subsequent email to The Associated Press.

During a hearing in August over possible discipline for the records release, Pattis invoked his Fifth Amendment right against self-incrimination and refused to answer questions. In a court filing, he said there was no proof he violated any conduct rules and called the records release an "innocent mistake."

A spokesperson for lawyers for the Sandy Hook families said they were not commenting on Pattis’ suspension.

Pattis is currently representing one of several members of the Proud Boys extremist group charged criminally in connection with the Jan. 6, 2021, insurrection at the U.S. Capitol in a trial in Washington that is underway. It wasn’t immediately clear how the suspension would affect the case. Pattis said he has notified the judge in Washington of the discipline.

Twenty first graders and six educators were killed in the shooting on Dec. 14, 2012, in Newtown, Connecticut. Relatives of eight victims, as well as an FBI agent who responded to the shooting, sued Jones and his Austin, Texas-based company, Free Speech Systems, over the hoax claims, alleging defamation and infliction of emotional distress.

Neil Heslin and Scarlett Lewis, the parents of Jesse Lewis, a victim of the 2012 Sandy Hook mass shooting took the stand Tuesday, followed later in the day by Alex Jones himself.

The plaintiffs testified during a monthlong trial about being threatened and harassed for years by people who deny the shooting happened. Strangers showed up at some of their homes and confronted some of them in public. People hurled abusive comments at them on social media and in emails. Some received death and rape threats.

The Sandy Hook families’ lawyers gave Pattis nearly 400,000 pages of documents as part of discovery in the case, including about 4,000 pages that contained the plaintiffs’ medical records. Bellis limited access of the records to lawyers in the Connecticut case.

In May of last year, Pattis’ office sent an external hard drive containing the records to a bankruptcy lawyer for Jones and Free Speech Systems in Texas, Bellis’ ruling said.

The bankruptcy lawyer, Kyung Lee, later gave the hard drive to lawyer Andino Reynal, a lawyer representing Jones and his company in a similar lawsuit over Jones’ hoax claims filed in Texas by the parents of another child killed in the massacre. Reynal then sent the documents to the Sandy Hook families’ lawyer in Texas.

The Texas case went to trial in the summer and resulted in Jones being ordered to pay the parents nearly $50 million in damages.

Bellis also is deciding whether Reynal should be suspended from practicing law in Connecticut, although he is based in Houston. In a court document, Reynal said he should not be disciplined, because a staff member at his firm sent the records to the Sandy Hook families’ Texas lawyer by mistake.

Jones has said he plans to appeal both verdicts. Jones, personally, and Free Speech Systems are both currently seeking bankruptcy protection.