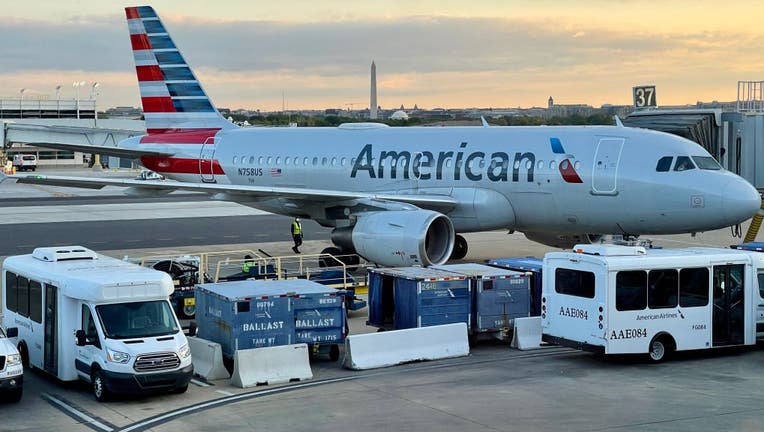 An American Airlines plane is seen at sunrise on the tarmac of the Reagan Washington National Airport (DCA) in Arlington, Virginia, on April 22, 2021. (Photo by Daniel SLIM / AFP) (Photo by DANIEL SLIM/AFP via Getty Images)

WASHINGTON - AT&T and Verizon will delay launching new high-speed wireless service near some airports.  The decision from the telecommunication companies came Tuesday as the Biden administration tried to broker a settlement between the telecom companies and the airlines over a rollout of new 5G service.

AT&T and Verizon planned to activate their new 5G wireless service Wednesday after two previous delays from the original plan for an early December rollout.

AT&T said it would delay turning on new cell towers around runways at some airports — it did not say how many — and work with federal regulators to settle the dispute.

A short time later, Verizon said it will launch its 5G network but added, "we have voluntarily decided to limit our 5G network around airports." It blamed airlines and the Federal Aviation Administration, saying they "have not been able to fully resolve navigating 5G around airports" although it is working in more than 40 countries, according to the Associated Press.

CEOs of major airlines raised concerns about the rollout of the new 5G wireless service and the potential "catastrophic disruption" it could cause to airplane systems and operations.

In a letter obtained by FOX Television Stations, the airline leaders wrote on Monday that they’re requesting 5G service to be implemented everywhere in the country except "within two miles of airport runways at affected airports." The CEOs said this would avoid disruptions to the aviation industry, air travelers, airline employees, supply chain, and vaccine distribution.

The airline leaders wrote that the 5G rollout could ground flights and leave thousands of American travelers "stranded overseas."

In December 2021, the FAA said that it would restrict pilots from using automated landing systems at certain airports after the rollout of 5G or fifth-generation wireless service because it could interfere with radio altimeters.

Altimeters are devices that measure the height of aircraft above the ground. Pilots use altimeters to land when visibility is poor, and they link to other systems on planes.

"We understand that most of the 50 large airports that were identified by the FAA for relief will still be subject to flight restrictions on January 19. The FAA’s statement yesterday minimizes the fact that they are not granting relief to airports that are used by most of the traveling and shipping public," the letter states.

It continued: "Unless our major hubs are cleared to fly, the vast majority of the traveling and shipping public will essentially be grounded. This means that on a day like yesterday, more than 1,100 flights and 100,000 passengers would be subjected to cancellations, diversions or delays."

The CEOs concluded that they’re ready to continue working with the federal government and mobile wireless providers to find a solution that can allow the 5G rollout to happen while protecting the aviation industry from "devastating operational restrictions."

5G is a new technical standard for wireless networks that promises faster speeds; less lag, or "latency," when connecting to the network; and the ability to connect many devices to the internet without bogging it down. 5G networks will ideally be better able to handle more users, lots of sensors, and heavy traffic.

On Jan. 1, Airlines for America, a trade group for large U.S. passenger and cargo carriers, said in an emergency filing that the FCC has failed to adequately consider the harm that 5G service could do to the industry.

In October 2021, the FAA expressed concerns that 5G cellular technology could interfere with aviation. The agency drafted a memo to pilots warning them of the potential interference between the cockpit safety systems, and automated systems, and a 5G wireless service that was set to go live in December.

What airports would be affected by the 5G rollout?

The FAA has previously identified 50 airports across the country that needed 5G "buffer zones" where wireless transmitters were already installed close to runways.

FOX10 Phoenix, FOX29 Philadelphia, and the Associated Press contributed to this story