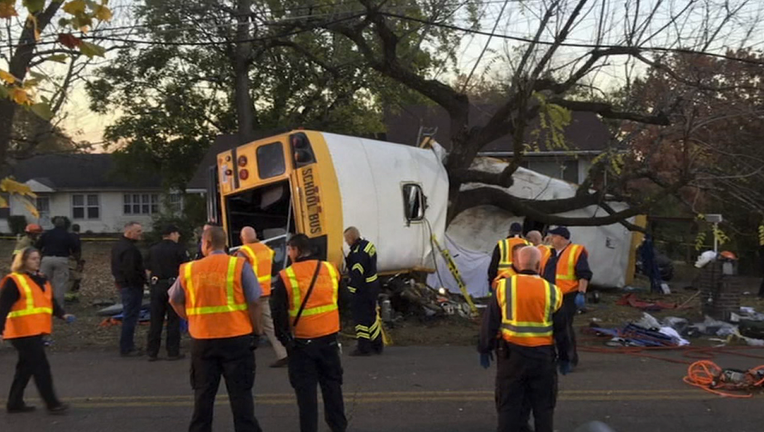 CHATTANOOGA, Tenn. - Monday, a school bus carrying three dozen elementary school students in Chattanooga crashed, killing five and sending several dozen others to the hospital. The incident prompted both a criminal and federal investigation into the cause.

Here are five things you should know about the crash:

1 - The investigation is just beginning

Investigators from both the National Transportation Safety Board and the Chattanooga Police Department have said they are still in the very early stages of trying to find out why the 2008 Thomas Built school bus flipped and eventually slammed into a tree, killing five students. Court documents suggest speed was a factor. Click here for more

2 - The driver's next court appearance

Johnthony Walker, 24, is scheduled to appear in court next Tuesday. He is currently being held on $107,500 bail. Walker was charged late Monday evening with five counts vehicular homicide, reckless endangerment and reckless driving. Chief Fred Fletcher said more charges are likely as the investigation progresses. Click here for more

3 - 12 children remain in the hospital

As of Tuesday evening, 12 children remain in the hospital. Six are listed in critical condition while the other six are said to be stable. Physicians at Children's Hospital at Erlanger in Chattanooga during a press conference Tuesday afternoon described what they went through to treat and identify the several dozen students rushed there following the crash. Click here for more

4 - A community struggles to cope

Special grief counselors were brought onto Woodmore Elementary School campus on Tuesday to help begin the healing process with the classmates of the victims. Many parents admitted they don't know what to say to their children when it comes to the tragedy. At the crime scene, the remains of the bus were replaced with a makeshift memorial comprised of flowers, stuffed animals, cards, and balloons. Residents of the tight-knit community met for a prayer vigil later in the night and released balloons to express their love for the souls taken too soon. Click here for more

5 - The crash has sparked debate

The deadly crash has once again ignited debate across the county on if school buses should be equipped with seatbelts. The National Transportation Safety Board said they have put out recommendations regarding restraints in the past and they will investigate if seatbelts would have helped to save lives in this crash. Click here for more