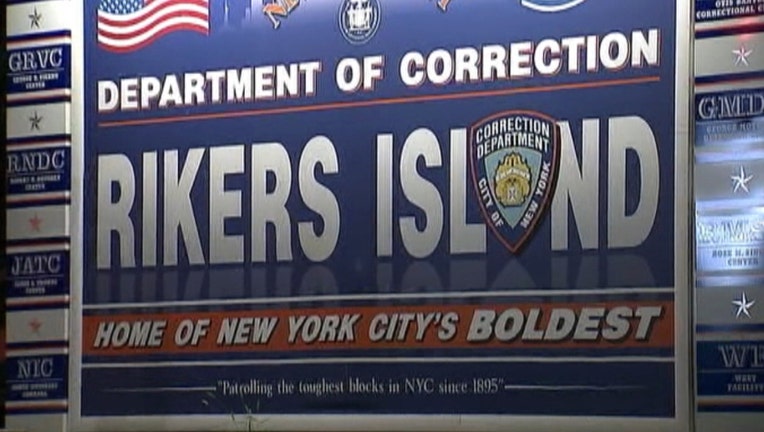 A sign at the entrance to the bridge to Rikers Island. (FOX 5 NY)

New York City was hit by the nation’s largest coronavirus jail outbreak to date this week, with at least 38 people testing positive at the notorious Rikers Island complex and nearby facilities — more than half of them incarcerated men, the board that oversees the city's jail system said.

Another inmate, meanwhile, became the first in the country to test positive in a federal jail.

In a letter to New York's criminal justice leaders, Board of Correction interim chairwoman Jacqueline Sherman described a jail system in crisis.

She said in the last week, board members learned that 12 Department of Correction employees, five Correctional Health Services employees, and 21 people in custody at Rikers and city jails had tested positive for the coronavirus.

And at least another 58 were being monitored in the prison's contagious disease and quarantine units, she said.

“It is likely these people have been in hundreds of housing areas and common areas over recent weeks and have been in close contact with many other people in custody and staff,” said Sherman, warning that cases could skyrocket. “The best path forward to protecting the community of people housed and working in the jails is to rapidly decrease the number of people housed and working in them.”

New York officials have consistently downplayed the number of infections in its prisons and jails, The Associated Press has found in conversations with current and former inmates.

The city’s jail agency and its city-run healthcare provider did not respond to messages seeking comment on the letter. On Friday, the city's Department of Corrections said just one inmate had been diagnosed with coronavirus, along with seven jail staff members. Late Saturday, the department acknowledged 19 inmates had tested positive — two fewer than in the board’s letter — and 12 staff members.

Earlier this week, Juan Giron was transferred to Rikers Island from an upstate facility after his sentence was vacated because the judge had failed to consider him for youthful offender treatment. After going through intake, where he underwent health screening, he was taken to a dormitory that housed more than two dozen men, their beds lined up next to one another, spaced a few feet apart.

“This is like a shelter. So everybody is out and about. You’re talking to people, mingling” Giron said. “Last night, a guy is brought in at around 6 p.m., and a few hours later, two police officers come in with masks and gloves on and try to give the guy a mask. They looked scared, didn’t even want to touch him. They told him to pack up, so he packed up and they took him out. It was crazy.”

“We asked one of the officers and they said, ‘That’s the process we are doing now for guys who have the virus,’” Giron said, adding that others who had had contact with the man have not been questioned or notified about his status.

More than 2.2 million people are incarcerated in the United States — more than anywhere in the world — and there are growing fears that an outbreak could spread rapidly through a vast network of federal and state prisons, county jails and detention centers.

It’s a tightly packed, fluid population that is already grappling with high rates of health problems and, when it comes to the elderly and the intern, elevated risks of serious complications. With limited capacity nationally to test for COVID-19, men and women inside worry that they are last in line when showing flu-like symptoms, meaning that some may be infected without knowing it.

The first positive tests from inside prisons and jails started trickling out just over a week ago, with less than two dozen officers and staff infected in other facilities from California and Michigan to Pennsylvania.

Sherman wrote to Commissioner of New York City’s Department of Correction, the Chief Judge of the Court of Appeals, New York’s Acting Commissioner, and district attorney asserting that those who are at higher risk from infection, including people over 50 or with underlying health conditions, should be considered for early release. So should people detained for administrative reasons, like parole violations, she wrote.

Mayor Bill de Blasio earlier this week said prosecutors were working to identify candidates and by Friday night, prosecutors in New York City agreed to release 56 Rikers inmates on their own recognizance.

Bianca Tylek, executive director of the national criminal justice advocacy organization of Worth Rises, said that wouldn’t cut it.

“There are nearly 1,500 people incarcerated on Rikers Island for low level offenses or technical parole violations who can be released immediately,” she said. "Releasing them would reduce their risk of infection, reduce the risk for all those who remain incarcerated, and reduce the spread of the virus into the public.”

The man, who is housed at the Metropolitan Detention Center in Brooklyn, complained of chest pains on Thursday, a few days after he arrived at the facility, the federal Bureau of Prisons told the AP. He was taken to a local hospital and was tested for COVID-19, officials said.

He was discharged from the hospital on Friday and returned to the jail, where he was immediately placed in isolation, the agency said, adding medical and psychiatric staff were visiting him routinely.

Others housed with the man are also being quarantined, along with staff members who may have had contact with him.

There have been two positive cases among BOP staff members: an employee who works at an administrative office in Grand Prairie, Texas, and another employee who works in Leavenworth, Kansas, but who officials said did not have contact with inmates since becoming symptomatic.

The Bureau of Prisons has temporarily halted visitation at all 122 federal correctional facilities across the U.S., including both social and legal visitation, though officials have said some exceptions could be made for legal visits.

For most people, the new coronavirus causes only mild or moderate symptoms, such as fever and cough. For some, especially older adults and people with existing health problems, it can cause more severe illness, including pneumonia, and even death.

The vast majority of people recover from the virus. According to the World Health Organization, people with mild illness recover in about two weeks, while those with more severe cases may take three to six weeks to recover.