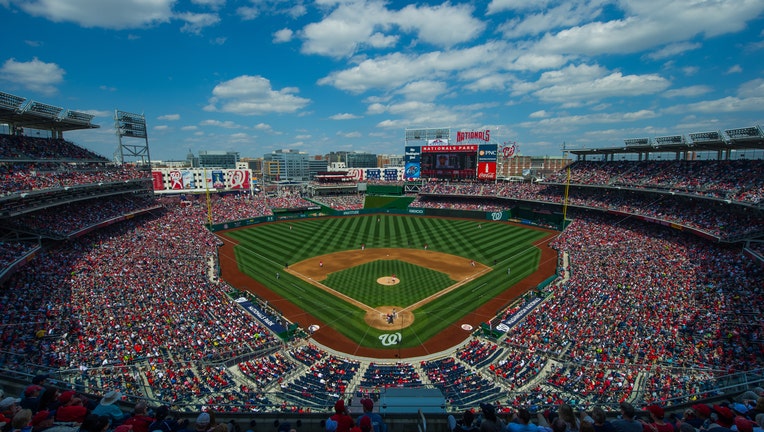 WASHINGTON, DC - APRIL 13: A general view of an overhead of Nationals Park from the upper deck during a day game between the Washington Nationals and the Atlanta Braves on Saturday, April 13, 2013 at Nationals Park in Washington, D.C. (Photo by Rob T

WASHINGTON - A pair of Washington Nationals fans will not be allowed back at Nationals Park for several years after getting into a confrontation with a player from the Chicago Cubs.

The Washington Nationals confirmed to FOX 5 Wednesday that the two fans are now serving a five-year ban.

The decision was made after two men were accused of heckling Cubs star Willson Contreras. The incident occurred in the top of the 10th inning during the Cubs win against the Washington Nationals on Tuesday.

After Contreras’ sacrifice fly gave the Cubs a lead, he made his way to the Cubs dugout and that's when two men in Nationals jerseys appeared to approach Contreras. The confrontation caused to Contreras to respond and get animated with the fans.

At least one person wearing a white Nationals jersey was seen being escorted out by ballpark security after Contreras returned to the dugout.

After the game, Contreras did not specifically indicate what was said during the tense back and forth, but did offer up that the fan made an unsavory comment to him in Spanish.

"If somebody tried to mess up my family, they’re going to (have to go through) me first. Whatever they said, it wasn’t healthy. It was not right," said Contreras about the incident. "What he said got under my skin. We’re speaking the same language. I know what he means."