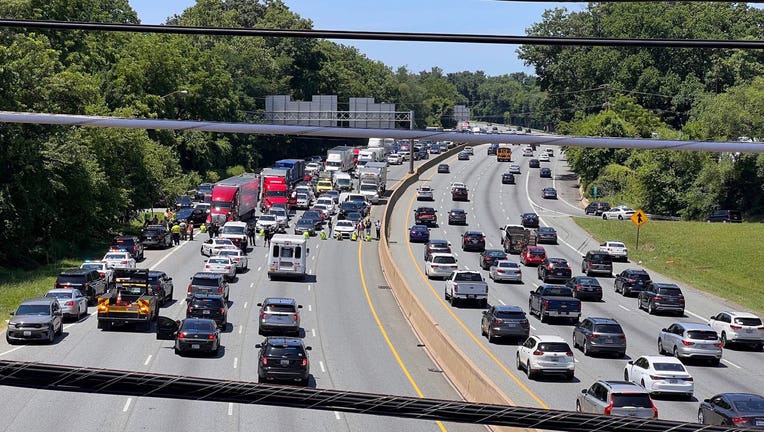 MONTGOMERY COUNTY, Md. (FOX 5 DC) - All lanes of traffic on the inner loop of I-495 in Montgomery County have reopened after a protest shut down the road Monday afternoon.

Maryland State Police said they arrested 14 people involved in the protest, according to a spokesperson. Charges include disturbing peace/hinder passage and failure to obey a reasonable/lawful order.

Rockville Barrack troopers responded to the scene just before 12:30 p.m. after receiving a report of a group of people sitting on the beltway blocking all lanes on the inner loop near MD 650.

Protestors were asked by authorities to move to the shoulder. Those that refused to comply with the dispersal order were subject to arrest.  Police said that all lanes were reopened by 1:45 p.m.

Residual delays are still expected, according to transportation officials.

The group behind Monday's protest, Declare Emergency, has released the following statement:

A group of ordinary concerned citizens has blocked the inner loop of the Capital Beltway in an act of civil resistance. Their demand is for President Biden to immediately declare a national state of climate emergency.
Today there were almost two dozen Declare Emergency campaign supporters on the road, coming from as far away as Oregon, Washington and Florida to make their voices heard here in DC/MD/VA area. A total of thirteen ordinary citizens have been arrested today while acting in nonviolent civil resistance, raising the alarm on the climate crisis.
The UN Secretary General Antonio Guterres said that climate activists are
"depicted as dangerous radicals, but the truly dangerous radicals are the countries that are increasing the production of fossil fuels."
Declare Emergency supporter, Deborah Kushner, Staunton VA;
"The world’s lack of any significant action to prevent the ravages of the impending climate catastrophe is what has led me to take this action. ... disaster is here, and worsening by the day. I choose to not be complicit in the horrible death of this amazing planet. We are far into the 11th hour. It’s time for us all to rise. We have everything to lose."
Our action is an expression of our fear for our families, for the future of humanity and life on Earth. We are acting upon what thousands of scientists tell us, because our government is refusing to. Many other groups around the world are taking similar actions as a part of a global coalition called the A22 Network. Declare Emergency is currently centered around Washington DC and is inviting everyone from all disciplines, classes and beliefs, to join us on the road.