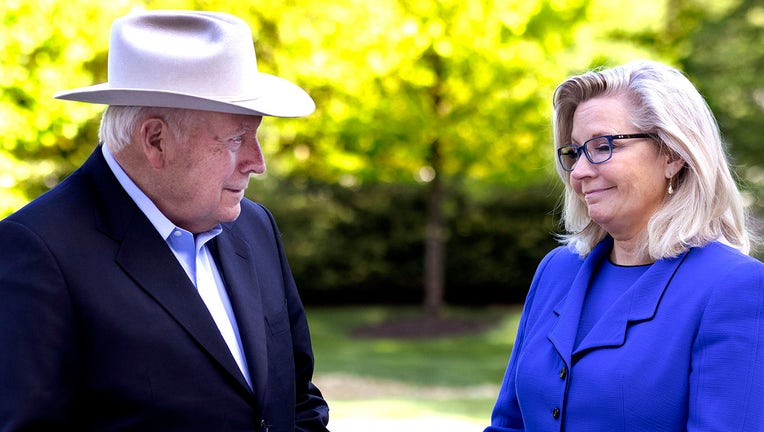 File: Congresswoman Liz Cheney with her dad, former Vice President Dick Cheney, at his house in Virginia after she was ousted from her GOP leadership role, May 12, 2021, McLean, Virginia. (Photo by David Hume Kennerly/Center for Creative Photography/

Former Vice President Dick Cheney excoriated Donald Trump in a new campaign video for his daughter Rep. Liz Cheney, calling the former president a "coward" and saying there has never been anyone who is a "greater threat to our republic."

The video was released Thursday by Rep. Cheney's reelection campaign, two weeks before a Republican primary election in Wyoming that the three-term congresswoman is bracing to lose. Echoing the criticism his daughter has made of Trump, Dick Cheney denounced him as a danger to the country through his relentless lies about the legitimacy of the 2020 election.

"In our nation’s 246-year history, there has never been an individual who is a greater threat to our republic than Donald Trump," Cheney said. "He tried to steal the last election using lies and violence to keep himself in power after the voters had rejected him.

"He is a coward," Dick Cheney said. "A real man wouldn’t lie to his supporters. He lost his election, and he lost big. I know it, he knows it, and deep down, I think most Republicans know it."

A spokesperson for Trump did not immediately return an email seeking comment on the video.

Trump has made defeating Liz Cheney a top goal since she joined nine other House Republicans in voting to impeach him for inciting the insurrection on Jan. 6, 2021, at the U.S. Capitol. She further infuriated him by becoming vice chair of the House committee investigating the riot.

Trump has endorsed lawyer Harriet Hageman in Cheney's primary. As the congresswoman has focused her energy on digging in to Trump's role surrounding the Jan. 6 violence, Hageman has barnstormed the state, courting small, rural crowds in the traditional mold of Wyoming politicking, an approach more like the one Cheney herself used to top a crowded Republican primary field to win the state's lone House seat in 2016.

Dick Cheney, who served eight years as President George W. Bush's vice president, has made no secret of his disdain for Trump and the members of his own party who, particularly in the wake of the Capitol riot, shied away from efforts to remove Trump from office.

In January, Dick Cheney and his daughter were the only two Republicans to attend a pro forma session of the House on the anniversary of riot at the Capitol, sitting together in the front row on the Republican side of the chamber.

"Well, it’s not a leadership that resembles any of the folks I knew when I was here for 10 years," Dick Cheney said after that gathering, noting the absence of other Republicans in the chamber of which he was a member in the 1980s.

Liz Cheney has faced other fallout from her vote to impeach Trump and join the Jan. 6 House committee. Several months after the impeachment vote, the House GOP dumped her from the No. 3 leadership post for her persistent repudiation of Trump’s election claims. Federal and state election officials and Trump’s attorney general have said there is no credible evidence the 2020 election was tainted.

Asked if he was disappointed by the move, Dick Cheney replied: "My daughter can take care of herself."

In the new video, the former vice president lauds his daughter for "standing up for the truth, doing what’s right, honoring her oath to the constitution, when so many in our party are too scared to do so."

"There is nothing more important she will ever do than lead the effort to make sure that Donald Trump is never again near the Oval Office, and she will succeed," Cheney said. "I proudly voted for my daughter. I hope you will, too."