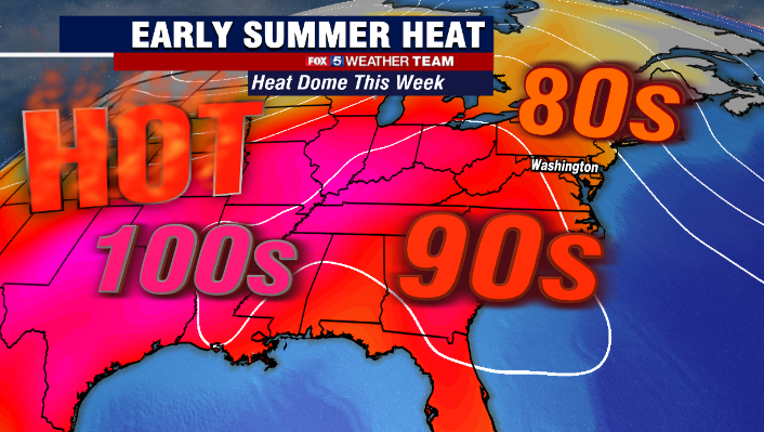 After a hot first couple of days of June, the first full workweek of the month was not so bad. In fact, of the last 10 days, high temperatures have only exceeded 85° twice! Humidity has been relatively low as well. That is all about to change starting on Monday however, as a "heat ridge" builds across the southern half of the United States. Triple digit heat is expected from Texas to western portions of the Midwest. While we will not get that hot in DC, expect the Monday to Friday period to be right around the 90° mark. The most noticeable change however will come in the form of humidity, which will be very high all week long. Prepare for those air conditioners to work overtime. 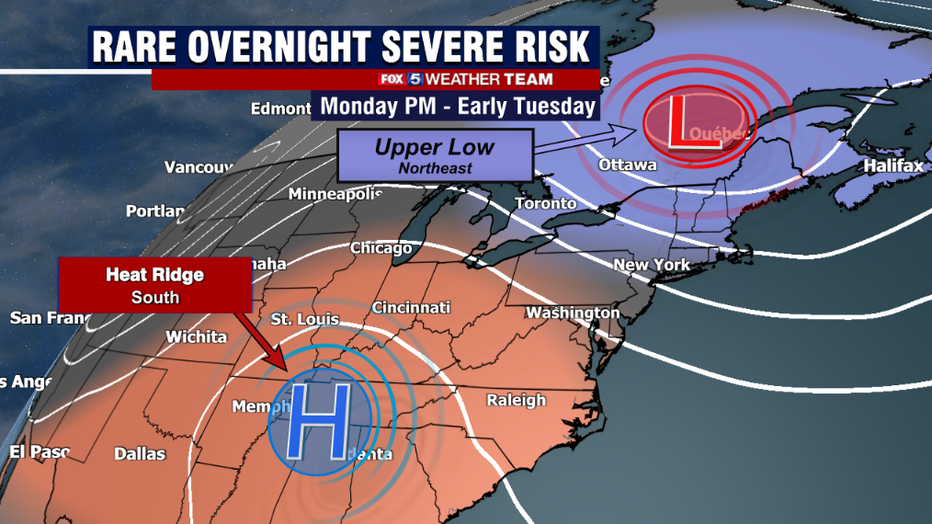 When it comes to these heat ridges, the type of weather you get depends heavily on where you are relative to where they are centered. Located underneath or to the immediate west of them? These are zones of upper convergence and sinking air…and that means low storm chances, sunshine, and some very hot temperatures. That is what threat befalls folks from Dallas to St. Louis this week. The National Weather Service in Dallas for example is calling for temperatures near 100° right through next weekend. If you're on the northeastern side of the heat ridge, which is where we here in DC find ourselves, you have to keep your guard up for showers and storms to fire each day with the heat of the afternoon, with severe weather being a risk as well. 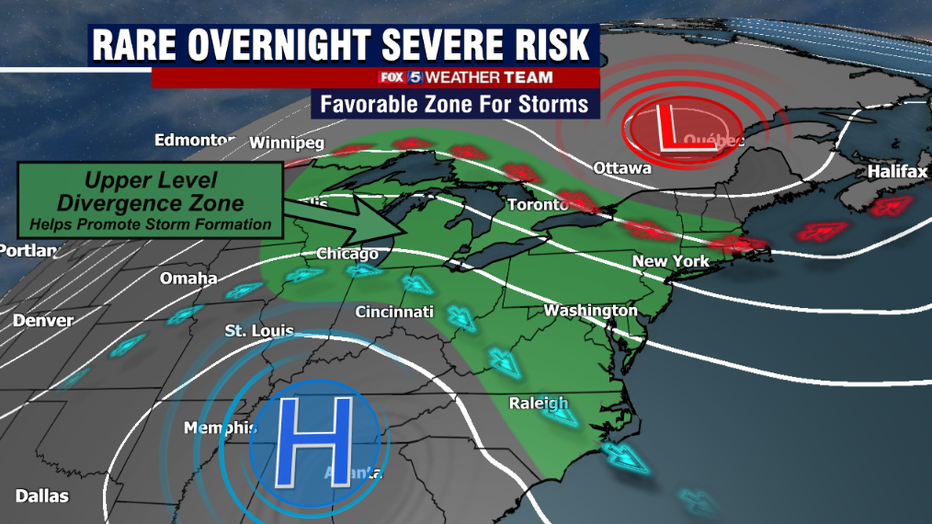 This is particularly true this week as the heat ridge will be matched with an upper level low just to the north of New England in southern Canada. This has two notable impacts on our region. The first is that it creates a zones of upper level divergence aloft as streams split between moving northward around the upper low, and also southward around the ridge. The atmosphere behaves like a fluid, it likes to be balanced. So where you have areas of upper divergence, you promote convergence at low levels of the atmosphere. This enhances the overall thunderstorm risk across the region. 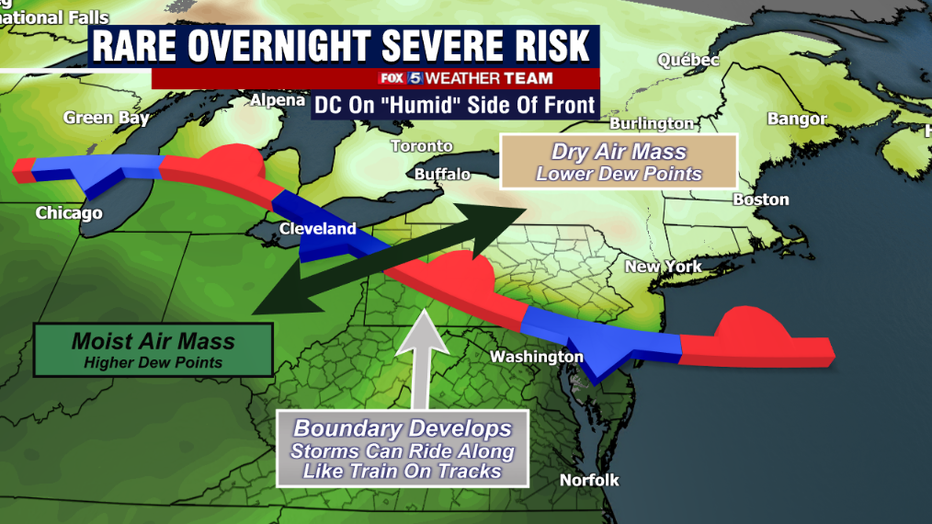 The second thing these two upper features do is lead to a clash of air masses. The upper low over Canada is steering a considerably drier (less humid) air mass southward out of Canada and across the Great Lakes and into the Northeast. The heat ridge to the south however, will be pumping northward a very moist (high humidity) air mass right off the Gulf of Mexico. A stationary boundary will develop between these two air masses just about each afternoon. These boundaries, or air mass "clash zones" are very typically where storms fire. 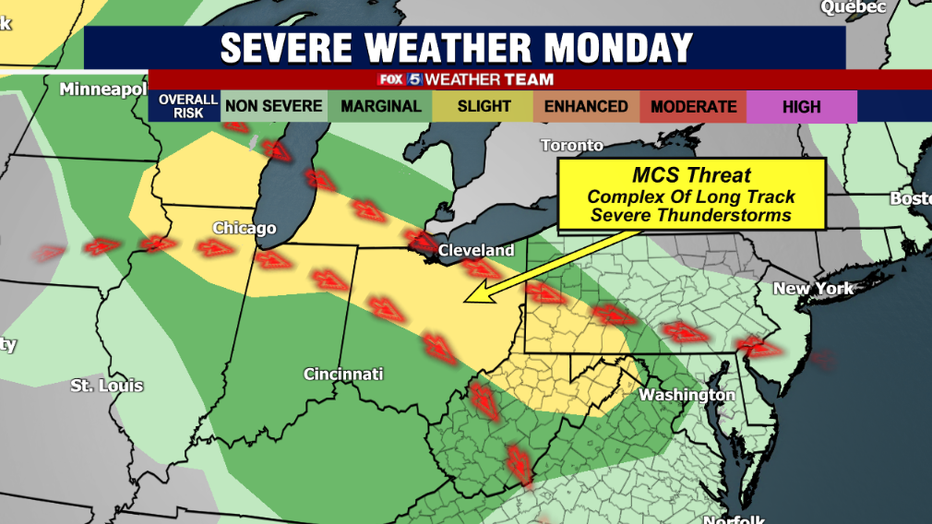 This includes the threat for a specific type of severe weather event known as a Mesoscale Convective System, or MCS. These are when thunderstorms develop in a large, globular system that is often times long lived. They can grow to the size of states and often times last for 12 hours or longer, spreading heavy rains and potentially damaging winds in their path. A strong MCS can develop its own central low pressure system, essentially a little miniature cyclone known as a Mesoscale Convective Vortex, or MCV. These rotating complexes of storms can enhance a tornado threat for a particular region. The worst of these storm complexes is the Derecho, which is a long lived and severe complex of thunderstorms that causes widespread wind damage for an extended period of time, often times hours. One of the most destructive Derechos in history impacted the Washington, DC and the Mid-Atlantic region in late June of 2012, causing millions of power outages and a twenty-two fatalities. What we can say however is we are not dealing with a 2012 scenario on our hands thankfully, as temperatures were considerably hotter (104° in DC!) on the day of that famous storm.

Something to note about these Mesoscale Convective Systems though is weather models do tend to struggle with them when it comes to forecasting. What forecasters are able to do is highlight an area where the conditions exist that are favorable for their formation, but when it comes to the track of these systems weather models have been known to change on a dime with their forecast strength, direction, and scale. 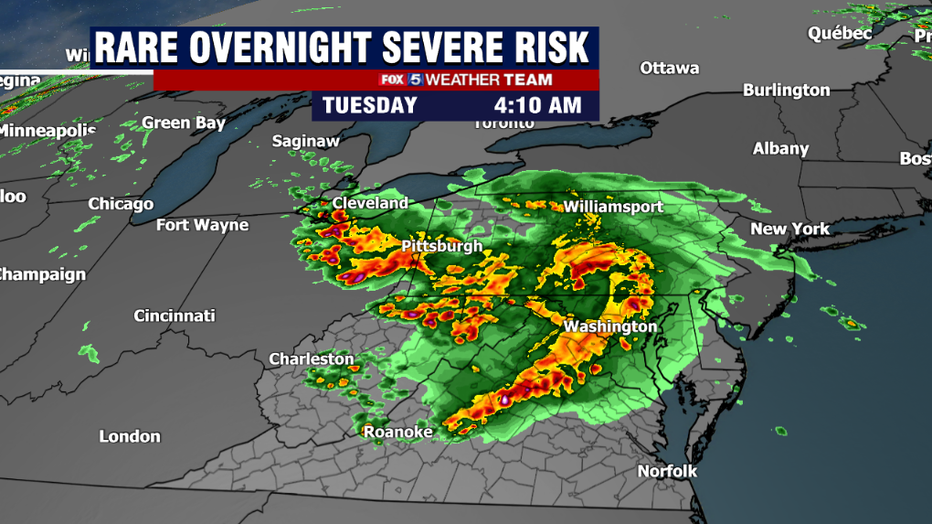 With that being he first of these severe weather threats that we have to keep a close eye on comes our way very late Monday into the very early morning hours of Tuesday. There is pretty widespread agreement on a complex of storms forming near the western Great Lakes on Monday afternoon. How this complex evolves throughout Monday evening is then a matter or debate, but several weather models do bring the complex near our region during the morning hours of Tuesday. This could lead to a rather rare case where we could have strong to severe thunderstorms around for the morning hours of Tuesday. Timing and intensity does need to be worked out here in the short term, but at this time the Storm Prediction Center does have us under an elevated (marginal) severe weather risk. We will keep you updated with the latest on this threat all day Monday on Fox 5 News.

The Tuesday threat will not be our only threat for severe weather this week, unfortunately. The heat ridge will hold the south in its humid grip through the end of the week, and each day with this will bring with it it's own threat for afternoon showers and storms which could become severe with the heat and moisture we will have in the DC region this week, right on through Friday when a cold front should sweep our region and usher in some nicer weather for the weekend. Stay tuned to Fox 5 as we cover what could be a busy weather week ahead!