WASHINGTON - Something we have gotten used to the second half of winter, hearing about the threat for snow here in the Washington, D.C. region but also hearing that not too much is expected. MOBILE USERS CLICK HERE TO WATCH LIVE

It has snowed in D.C. a total of eight days so far this month, and yet no single event this month has brought even an inch of snow to Reagan National Airport, the official measuring station for the city. Today has the potential to be day number nine in that regard.

Mike Thomas has the FOX 5 Weather forecast for Monday, February 22 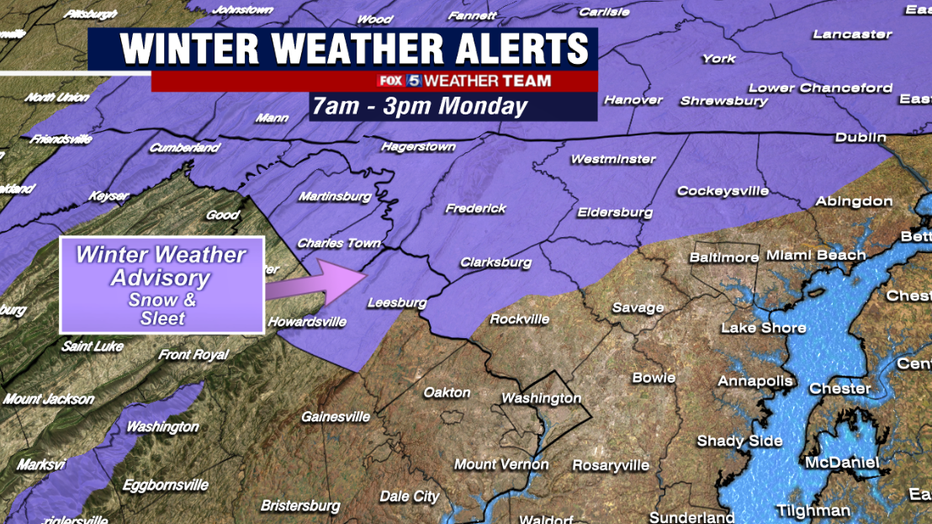 FOX 5’s Bob Barnard is in Frederick this morning, where they’re seeing slick driving conditions due to a wintry mess.

While we did not have any snow over the weekend, what we did have was a lot of cold. This was particularly true for our northern and western zones. Dulles International, BWI, Frederick, and Hagerstown just a few of the locations that saw temperatures dip into the teens during the early morning hours of Sunday.

Tucker Barnes has the FOX 5 Weather forecast for Monday, February 22.

Ground temperatures in these zones are plenty cold, and despite temperatures rising above freezing yesterday afternoon, snow would pretty easily stick on these surfaces if it fell at a steady enough pace.

For this reason, winter weather advisories have been posted for many of these zones between 7am and 3pm today. It includes parts of Loudoun, Montgomery, and Howard counties as well as those along the Mason-Dixon Line, but at this time does not include the immediate D.C. metro area. 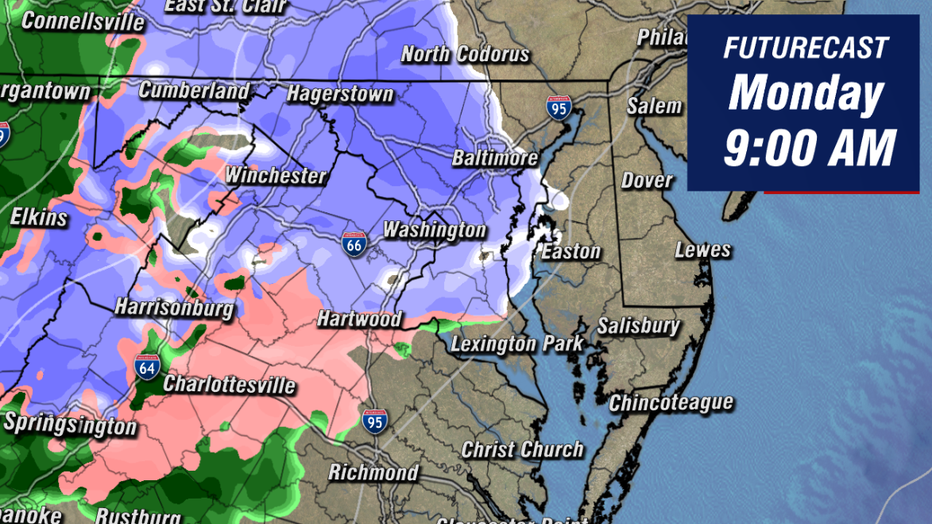 The event is expected to get underway during the second half of the morning commute, with snow most likely to spread between the I-81 corridor between the hours of 7am and 9am.

Snow is expected to be of the lighter variety here in Washington, and with a southern wind and warm air sneaking in aloft it is entirely possible that we start the event as sleet or a little bit of a rain/snow mix in the immediate metro area.

Northern zones though could start as all snow, and thanks to a very cold weekend the snow could quickly coat the grass and untreated surfaces. Those along and north of the I-70 corridor have the best shot at this happening. 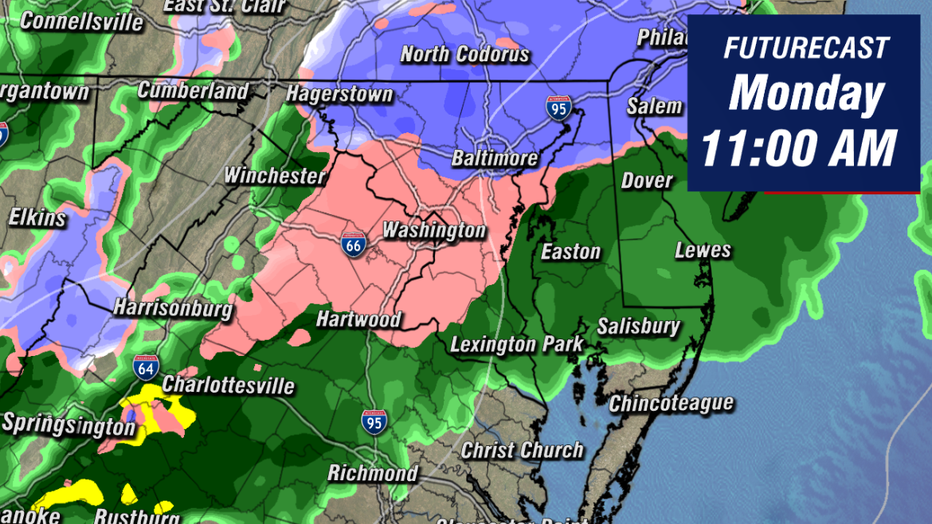 By the mid-to-late morning hours, snow should mostly start mixing with sleet across the area. Early morning temperatures are already marginal, and we are not anticipating much cooling through the morning hours.

So when we do transition over to sleet and mix we are not expecting nearly as much issues with icing as we dealt with at the end of last week for example. There will still be pockets of freezing rain out there, but it should be a lot more patchy than those previous events were. 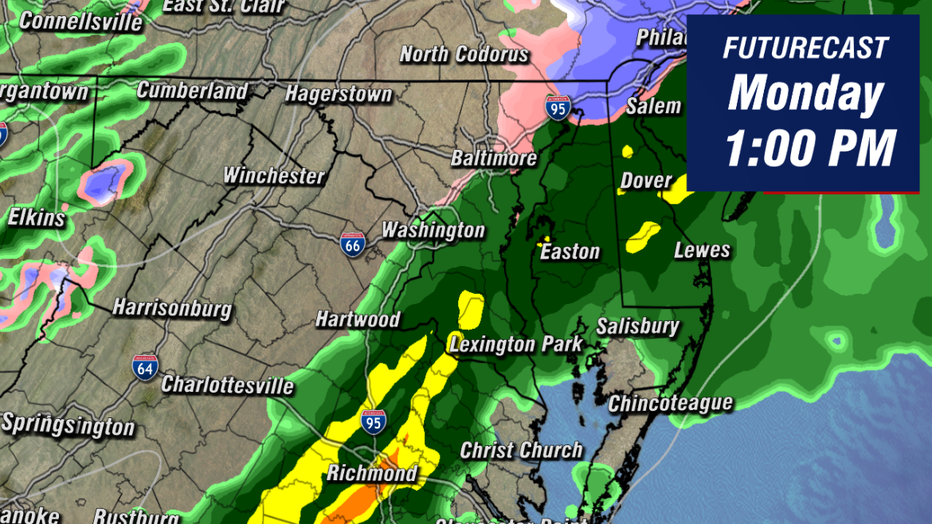 By the early afternoon, enough warm air aloft has pushed into the area that we're likely dealing with mostly rain if not all rain as far north as the Mason-Dixon Line.

As the cold front itself swings through our region, rain could come down briefly heavy, particularly in our southern zones across northern and central Virginia as the system begins to exit to our east. 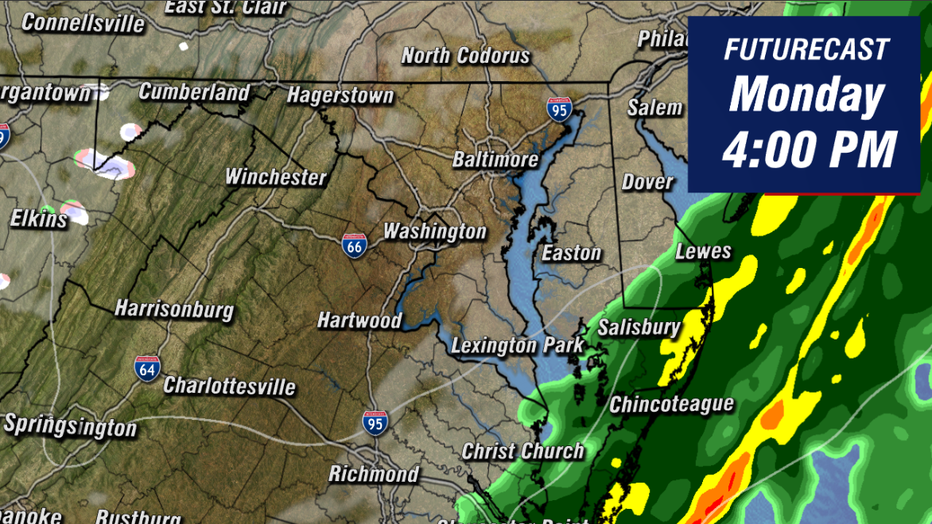 By the mid-to-late afternoon, Futurecast even suggests that skies may start to clear and the sun may return before sunset tonight. Temperatures later today should also be about ten degrees above freezing as the system exits our region.

Because of this, we do not anticipate lasting or refreeze issues with this particular event. The evening commute around the DC and Baltimore metro areas should not have any major lingering issues. 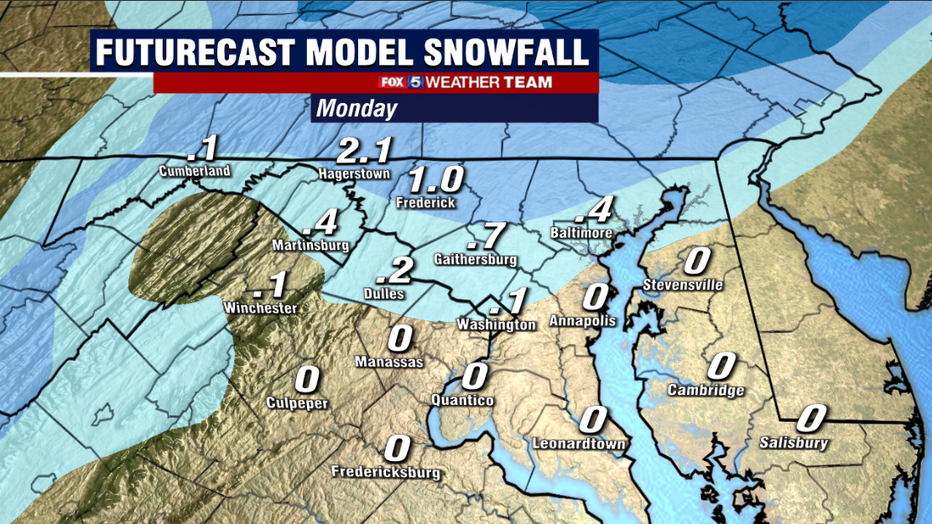 As far as accumulations are concerned, as previously mentioned we are not expecting all that much out of this particular system. The quick changeover to mix and rain along with just the general fast moving nature of this storm system should limit accumulations in general. 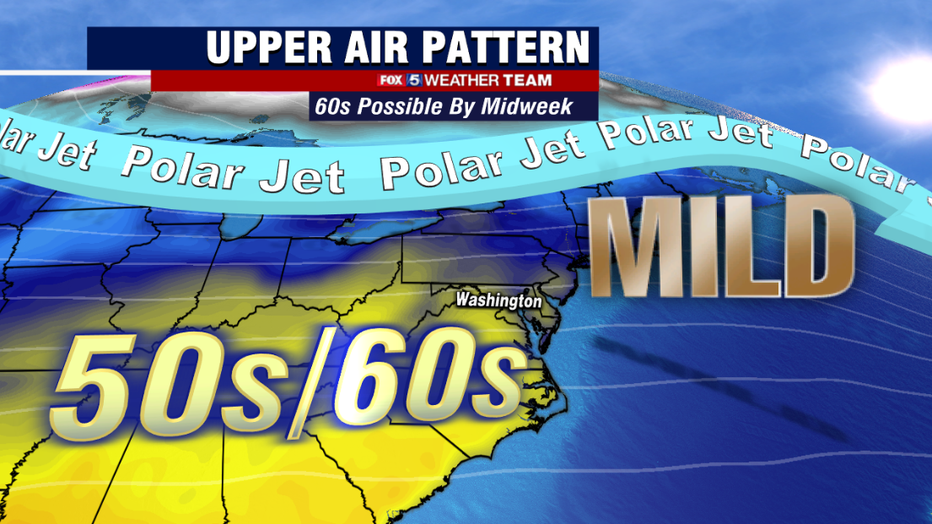 How about ending on a good note! It has been a rather exhausting February in our region weather wise, and I think a lot of us have "spring break" on our minds when it comes to the weather.

The good news is by the middle of this week, we just might get it! The jetstream is expected to briefly head north through the middle part of this week, allowing some milder air to push into our region from the south. As of Monday morning, we are forecasting a high on Wednesday of 60°, which is something that we have not seen here in Washington since Christmas Day.

It is short lived warmth though, as chilly temps return late week with perhaps a little more wintry mix to kick off the weekend on Saturday morning.

Do not forget you can track the winter weather as it pushes into our region with the FREE FOX 5 Weather App! It is an easy an convenient way to stay ahead of the forecast no matter what Mother Nature throws at us. Give it a download today!