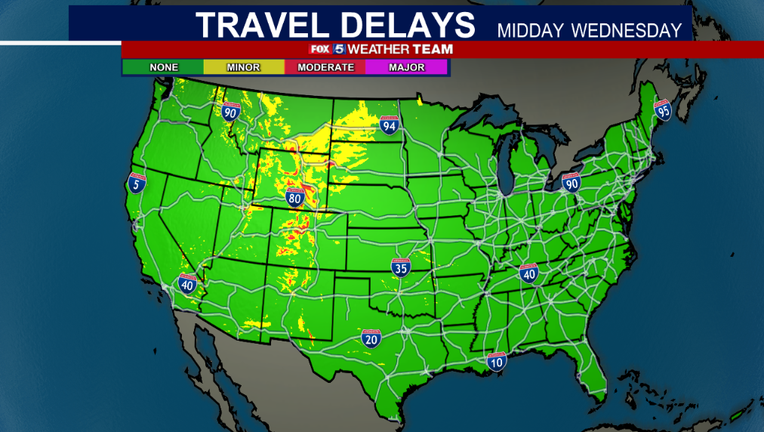 WASHINGTON - With the holiday season officially upon us, many are hitting the road, the rails, and the skies to be with loved ones ahead of the Thanksgiving holiday. With the busiest travel season in two years expected, we are happy to report that weather should not be a major factor in any delays that happen to come about. Lets break it down day by day for travelers. 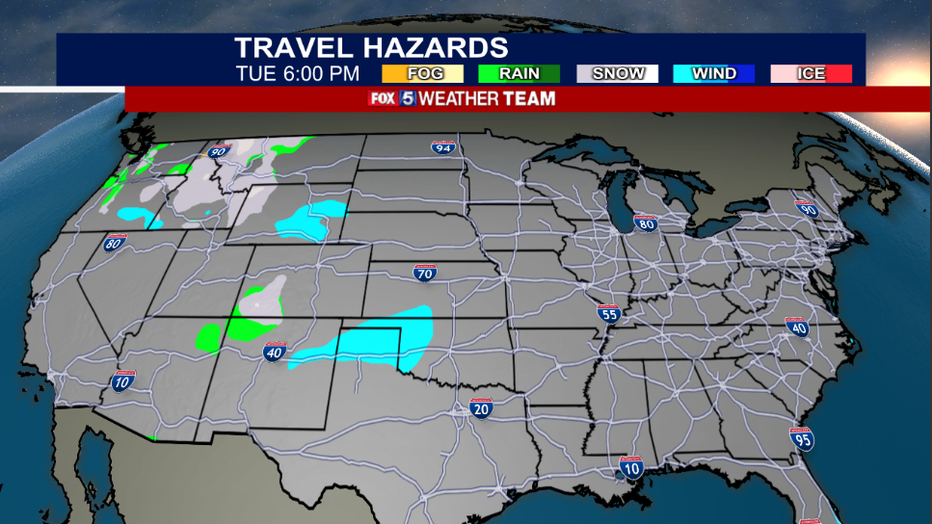 For the remainder of the day Tuesday, any delays that happen to be weather related would likely come from the Pacific Northwest. Seattle and Portland are getting some fog and rain this morning as a storm system slams the northwest coastline. Interior mountains of that region will pick up some heavy snows are well. Much of the remainder of the country will be quiet.

Closer to home, we will be cold and occasionally breezy. Areas near the Great Lakes could see a few lake effect snow showers, but that's about it. Nothing that should put a damper on Tuesday travel.

Mike Thomas has the FOX 5 Weather forecast for Tuesday, November 23 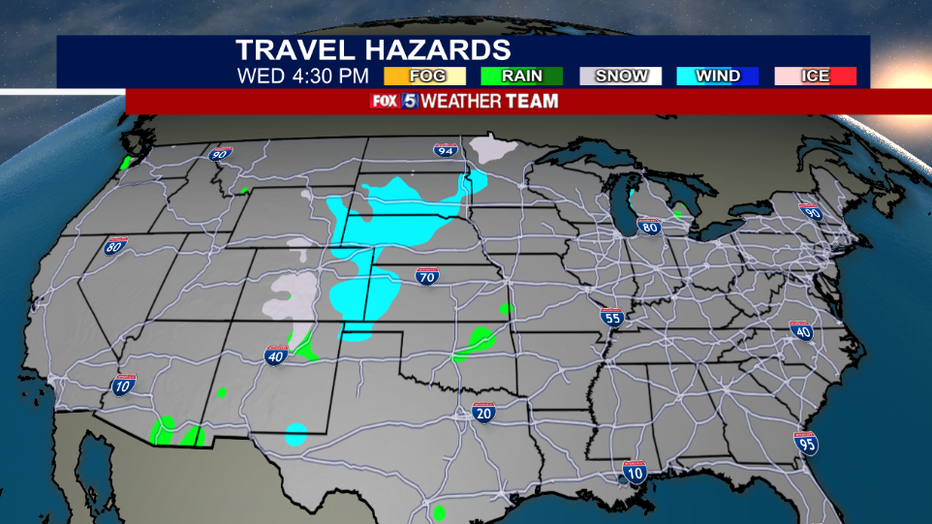 Wednesday is even better. What is typically the busiest travel day of the year also looks like one of the quietest weather days of the week. Troublesome weather should mostly be confined to the interior Rockies where accumulating snows are possible.

Airports right along the front range of the Rockies may experience some issues with wind, Denver often does for example, but much of the country will be quiet, calm, and easy for travel as far as the weather is concerned. 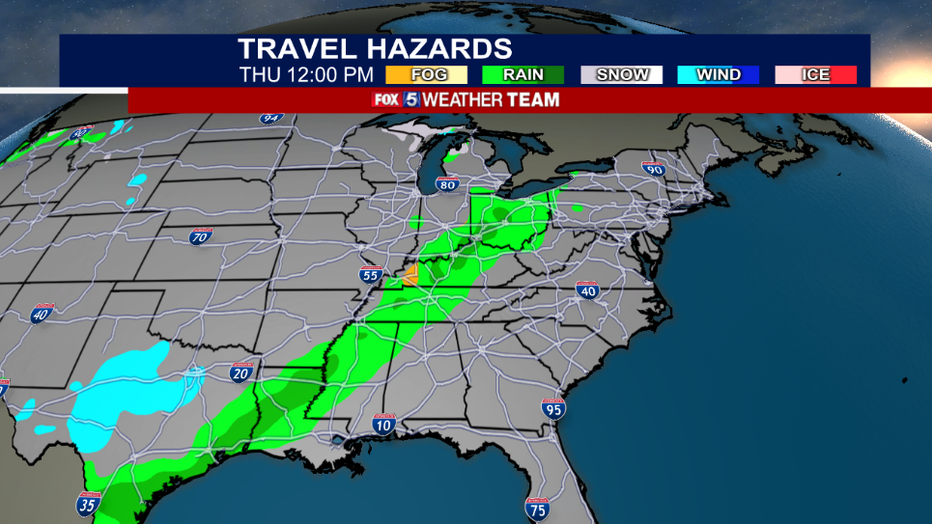 For Thanksgiving itself, the next cold front will start to get its act together across the Midwest. A band of showers is expected to develop by the afternoon across portions of Indiana, Ohio, and Kentucky that could make road travel in these regions a little tricky around turkey time.

Heavier thunderstorms will be possible farther to the south near the Gulf Coast. Much of the rest of the country will be calm and quiet, much like Wednesday. 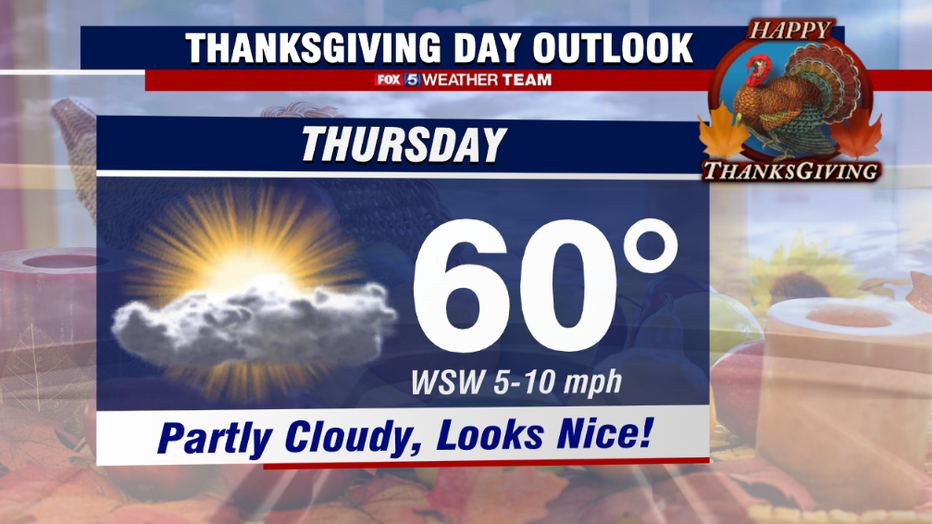 The D.C. area will benefit front the Midwest front in a positive way for Thanksgiving afternoon. While the morning will start off cold, but the afternoon winds will turn out of the south and actually lead to it being the warmest day of this week, with middle 50s to right around 60° for much of the area.

Skies will feature some occasional cloud cover, but the afternoon should remain dry. It is not until later in the evening and during the overnight hours that rain showers could start to push into our region from the west. Friday will be considerably colder as temps head back to the 40s. 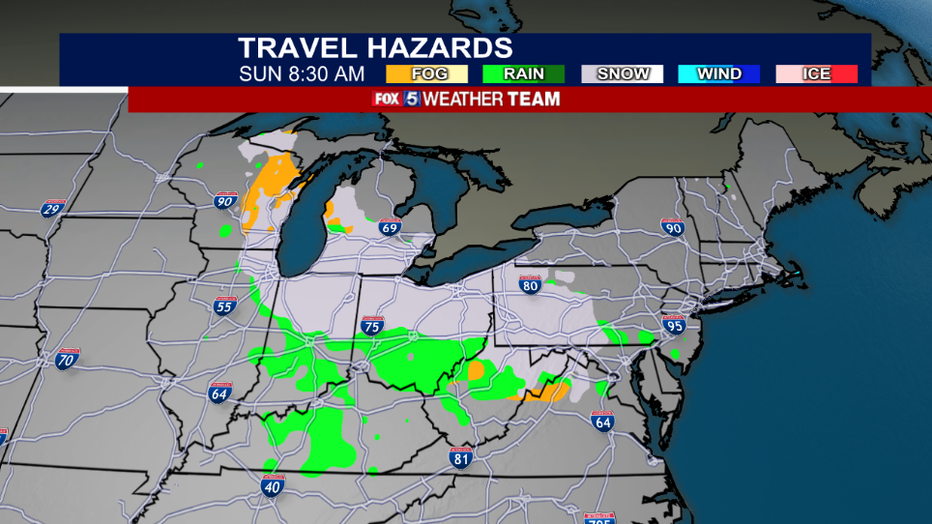 Looking ahead to return travel, the busiest day for which is of course Sunday, things could be a little more tricky across parts of the Midwest and Mid-Atlantic.

Cold air will be reinforced through the weekend with a drop in the jetstream on Sunday bringing down a weak, fast moving, and moisture starved storm system from Canada. This could potentially put down some light, but potentially travel disruptive accumulating snows across the Midwest and Great Lakes. 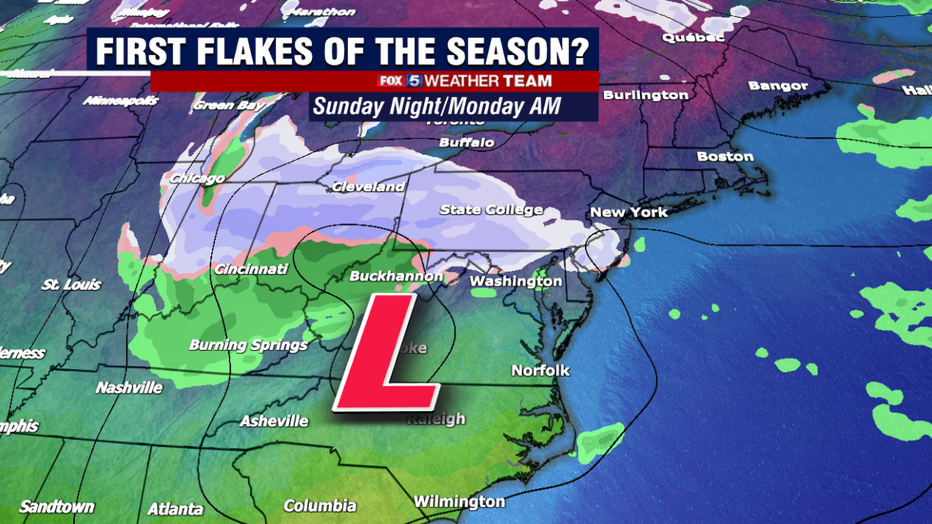 The system itself even has a chance to bring the I-95 and the DC/Baltimore corridors their first flakes of the season. Now, it should be mentioned this system is a little under a week away and clipper systems are notoriously hard to forecast even a few days out.

The reason time is many times they are more moisture starved than weather models indicate, since they are storms that often originate in cold and dry, landlocked regions. Particularly in our region, the mountains out to the west can often time break up the moisture field of these systems as they approach out area. 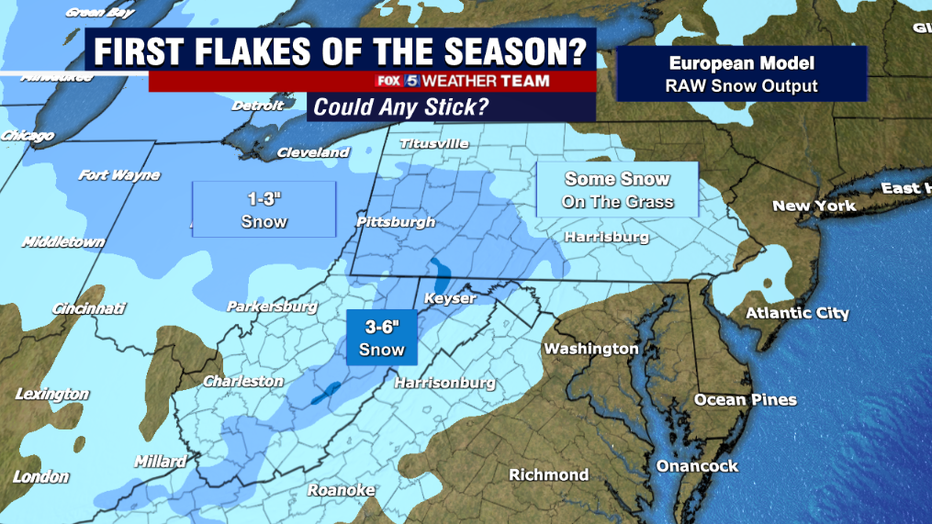 As far as accumulations go, clippers are not known for dropping heavy amounts on our area. They can be disruptive…but really only in the middle to latter part of winter where ground temperatures are well below freezing and any snowflake that falls, sticks.

So outside of the mountains, where the highest peaks could pick up 3-6" of snow, areas closer to the big cities are really just looking at the threat for a few passing snow showers. Still, it is a sign of the changing seasons! Winter begins in just 4 weeks after all. All the cold air around should get the local ski resorts off to a great start in terms of their snow making as well.

From the entire FOX 5 Weather Team to you, have a happy and safe Thanksgiving holiday!