Mike Thomas has the FOX 5 Weather forecast for Thursday, January 20

No rest for the weary here in the DC region this January. After a very warm December and what was essentially a two-year snow drought from the DC region, the pattern has really flipped so far here through the first few weeks of 2022. 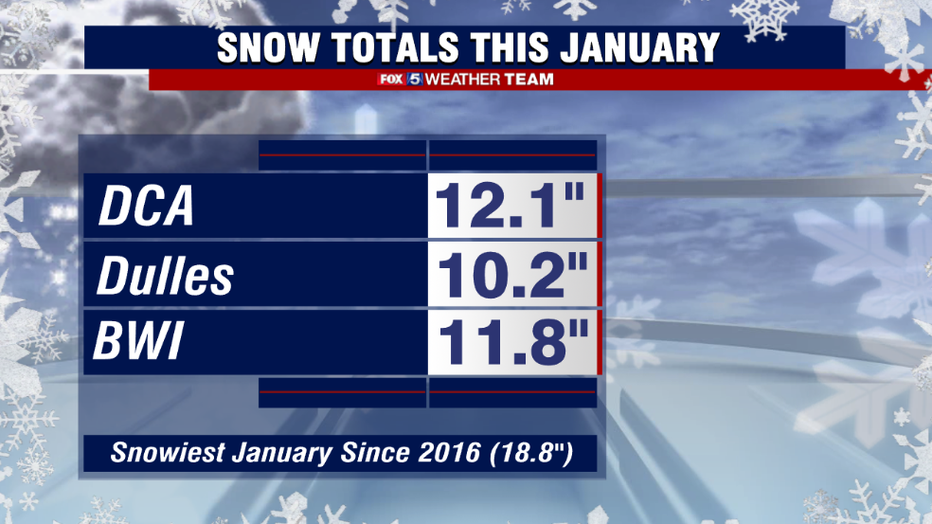 Since the turn of the New Year, the city has already picked up over a foot of snow. This is enough to make it already the snowiest January in DC in six years, with at least two more chances for snow before this week is out to add to that total even farther. 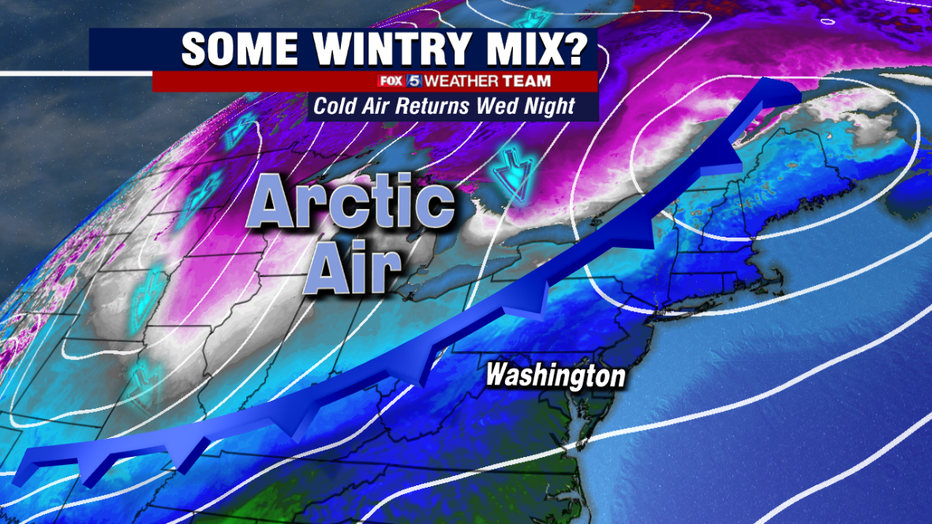 The first one comes into play on Thursday morning. Wednesday will actually be the warmest day of the week across our region, with some places making it close to 50°. The "warmth" will be short-lived though, as a strong cold front will cross our region on Wednesday night. Along with it, some showers will develop as cold air spills into the region, which may change over to mix or a bit of snow as the front passes. 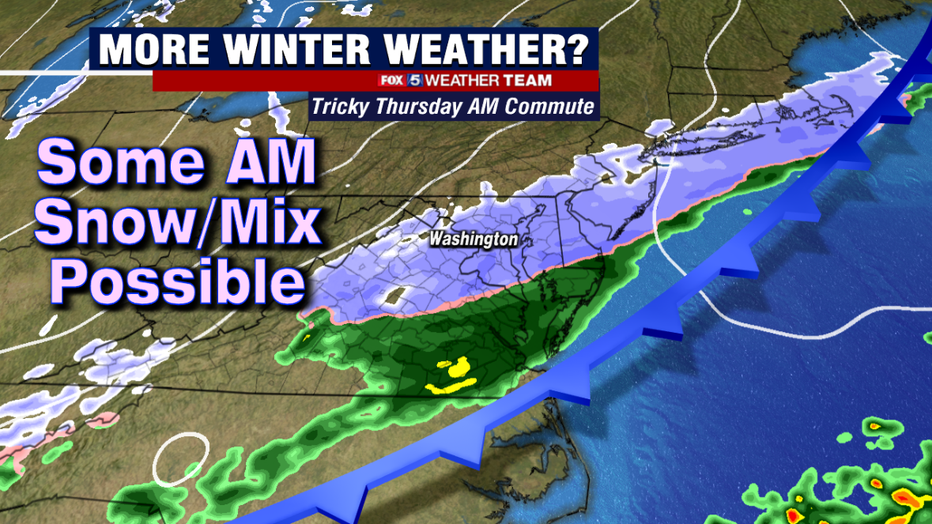 The key, however, is as the storm passes to the south, a weak wave of low pressure will then "bubble up" along this boundary, riding the front like a train on tracks up to the northwest. As it does so, it could throw additional moisture back into the DC region, and lead to a period of light to moderate snow over the DC area right around the morning rush hour. Ground temperatures will be marginally near freezing, and the threat for rain showers prior to snow would likely limit pre-treatment, so the morning commute could potentially become a mess quickly. 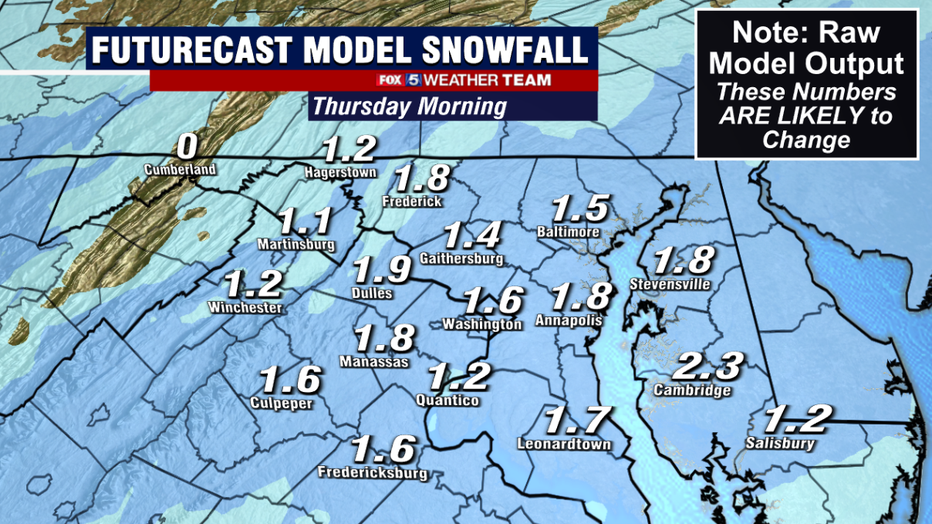 It should be noted that Thursday does not look like it will be a significant snow in terms of the amounts. This primary issue would Thursday morning would be the timing. The threat of a coating to an inch or two falling during the morning rush hour would be enough for winter weather advisories in the area. And school delays or cancellations would even be possible if conditions deteriorate fast enough. 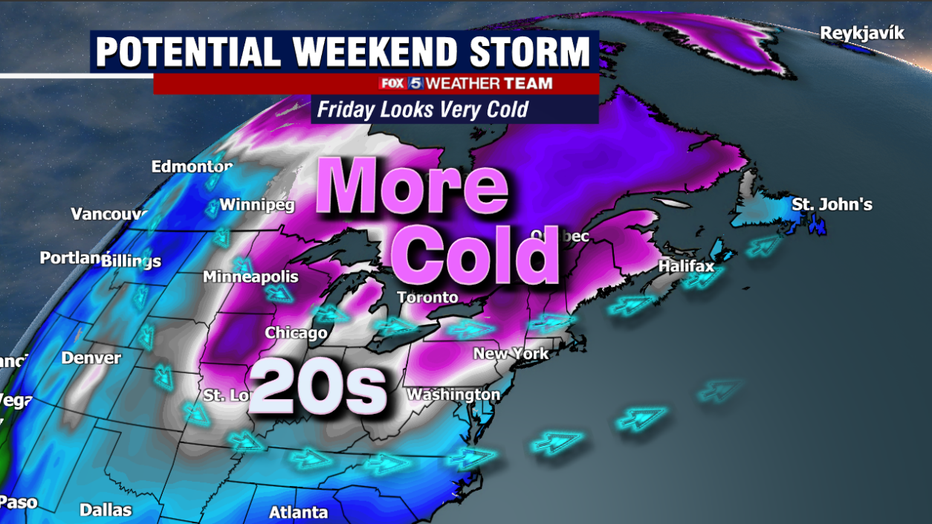 A much more vigorous storm system could approach the region this weekend. As with the other more significant snow systems of this winter so far, it all beings the day before when some very cold air overtakes our region. Friday is expected to start in the teens, with highs in most locations staying in the 20s during the afternoon. The cold temperatures help cool the ground and would set the region up ready for accumulating snows, now you just need moisture to "attack" the cold air in order to get snow into our region. 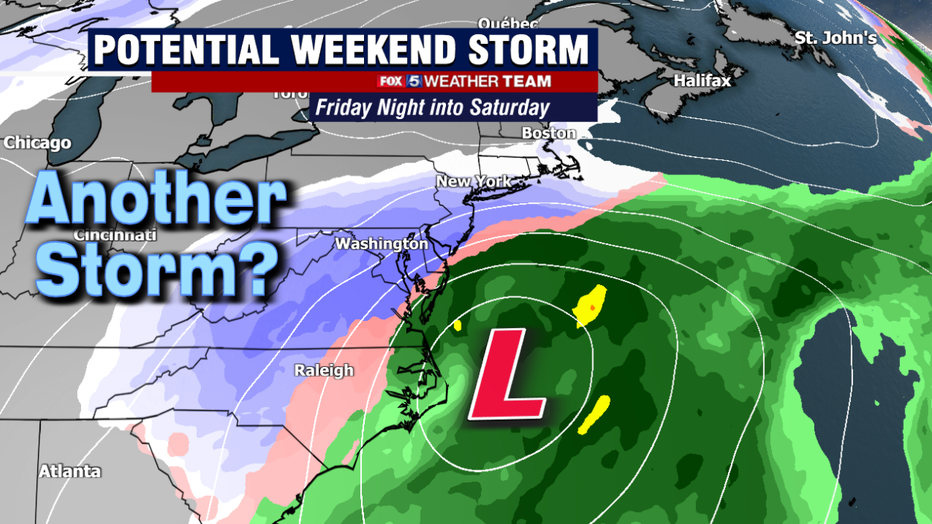 There is a lot still at play here when it comes to whether or not we are looking at a storm system this weekend. Chief among them is how strong some upper-level energy spilling out of the northwest will be as it crosses the county. What is different between this storm, and the one on Sunday, is that the way upper-level features are placed, if this is a storm, it is more likely to be a coastal storm, which means more of a snowmaker, as opposed to an interior storm like that would change us over to rain as Sunday did. The timing of this potential snowstorm would be Friday night into Saturday. 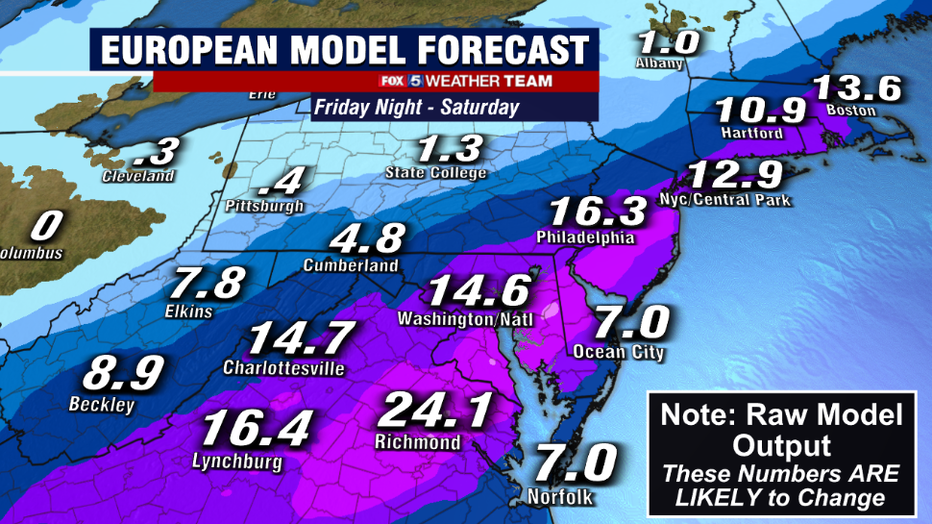 We use various models when making a forecast, with the most prominent two that are used beyond the 48-hour forecast window being the American and European models. As usual, they are in complete disagreement over what will happen with this storm. The European model, shown above, has for the past couple of days shown a stronger wave and therefore the development of a stronger coastal storm. Such a storm would have the potential to be the biggest of the season so far, with a shovelable snow for much of the Mid-Atlantic region. 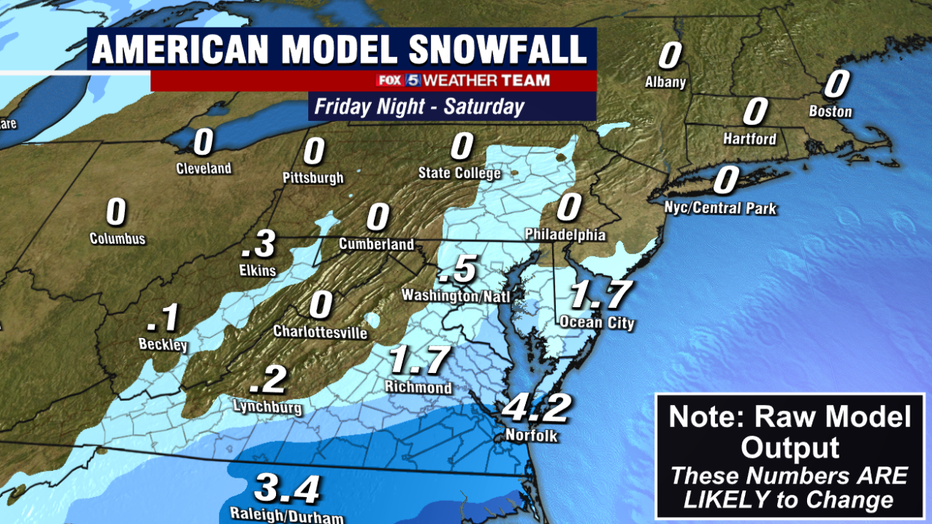 While the European has been consistent for the last few days for showing a storm, the American has been just as consistent with showing a near miss. The upper-level features are still there, but they are weaker and do not come together in the right way to bring a Nor'easter up the coastline. As a result, you end up with a wave that primarily passes out to sea to our south, dropping some lighter snow amounts as it does so. You can see the massive difference in totals that this makes.

People always ask me which model is more accurate. In the big picture, the European has the better track record overall. However, the American model has in recent months also performed very well. The short answer is, it is difficult to pick which model has the pattern right this time around given their recent track records. The pieces are there for a significant winter storm this weekend on all the models, the question is just whether they link up in time so that it actually happens.

We should receive more clarity in the days ahead. Be sure to check back for updates.