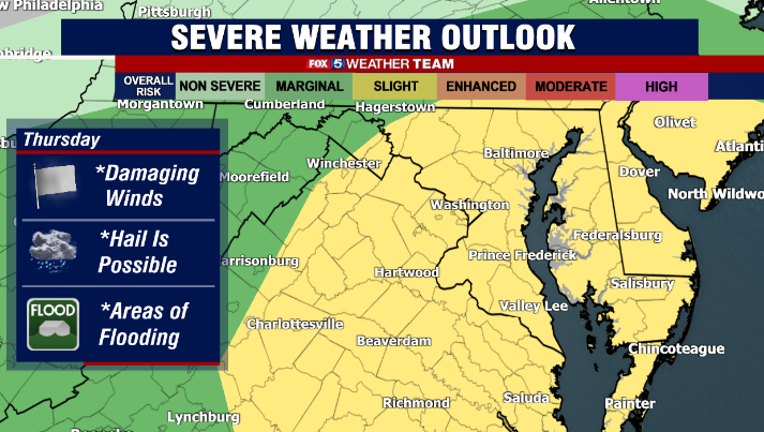 After the hottest end to May in 11 years, we have started off the first day of June on a very similar note. Temperatures soared into the middle 90s again on Wednesday afternoon, quite the start to the start of meteorological summer. While unseasonably hot, we are entering what is known as a La Niña summer. While we commonly hear the most about El Niño and La Niña during the winter months, the tropical Pacific does have an impact on the weather in our region all year long. La Niña summers are known to run hotter than average, and drier than average, both of which we expect this summer. However, when we do get cold fronts and thunderstorms, there is the increased chance that they will be strong to severe. This is a pattern we expect to repeat a lot this summer. 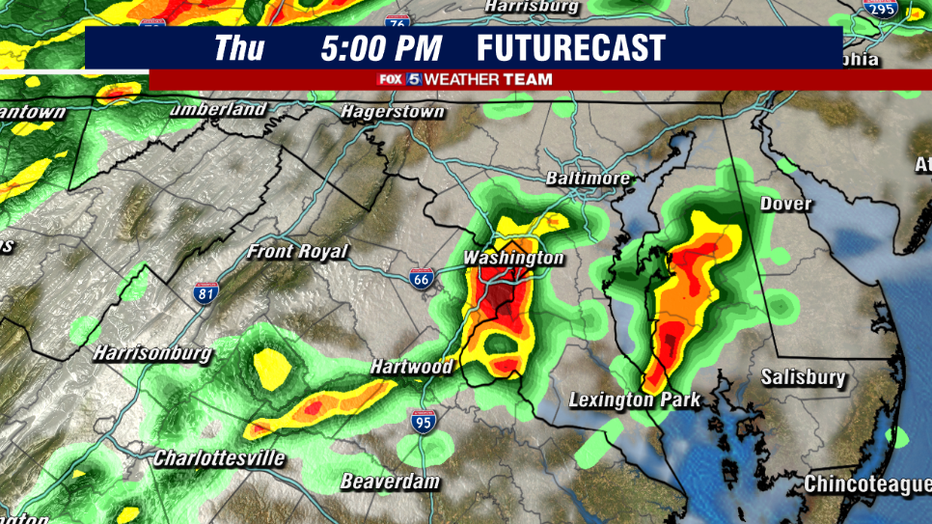 The Storm Prediction Center highlighted our region beginning on Monday for the increased threat of severe weather on Thursday afternoon. We will have ample moisture available for thunderstorms to tap into, as well as decent levels of atmospheric energy (think of it as storm fuel) to power thunderstorms tomorrow afternoon. A slow moving cold front sliding in front the northwest interacting with a weak, developing surface low pressure will provide the trigger for thunderstorms to fire and intensify during the afternoon. We have been placed under a "slight risk", which is level 2 of 5 for severe weather concerns tomorrow. This means that severe risks will be scattered, as opposed to say last Friday's enhanced risk, where severe impacts were more widespread. 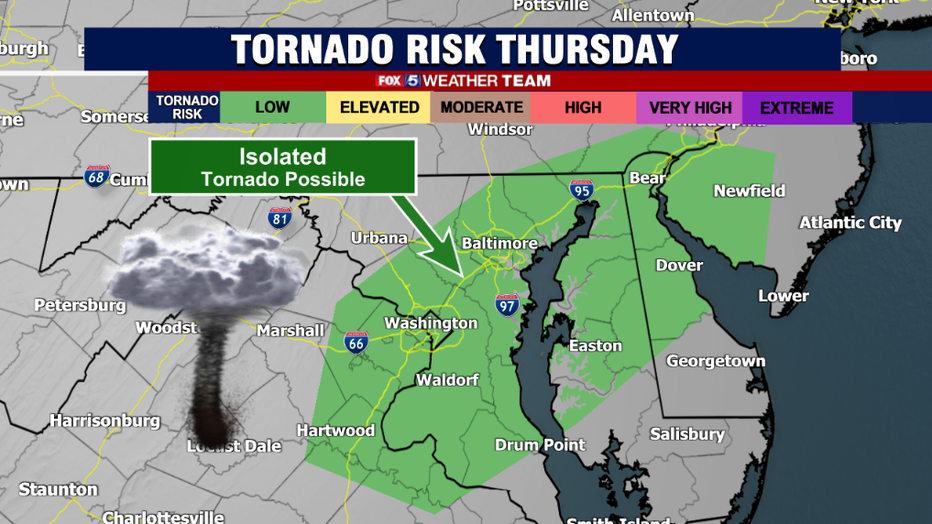 Storms are expected to be more "clusters" tomorrow afternoon compared with last Friday for example, where storms were more widespread with two separate squall lines that worked their way through the Mid-Atlantic. This means that tomorrow is not a day where our entire region will see thunderstorms, let alone severe weather. A luck few will stay dry, with these "dry slots" being most likely to the north and northwest of town. Wind shear, or turning of the winds with height, is also not aggressive  as last Friday, so the tornado threat is not as high. However, there is still a little bit of a turning of the winds (especially east of town) and so we cannot completely rule out the risk of an isolated, brief tornado in the region. However, we are not expecting as active of an afternoon as last Friday was, though we still recommend keeping your guard up during the afternoon. Damaging winds, large hail, and the potential for flash flooding are the greatest concerns out of these storms. 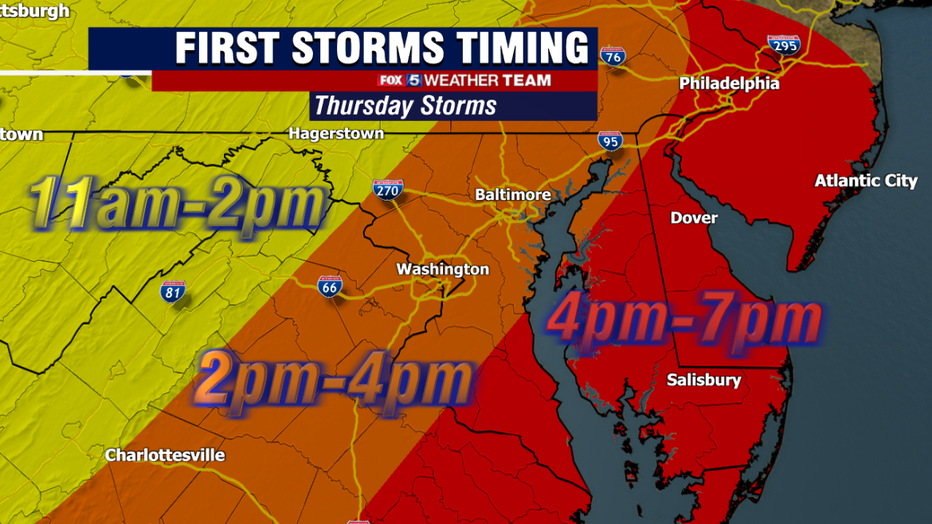 Thursday will start a lot like the last few days, with a good amount of sunshine and some heat as well. Temps are expected to hit the 90s for a third day in a row, which will officially make this hot stretch the first heat wave of the year. As far as storm timing goes, the cold front will be moving across the region from west to east, and thus the western zones will have the first shot as storms firing. For those along the I-81 corridor and the Blue Ridge, storms could start to fire anytime between 11am-2pm. For the immediate DC, Baltimore, and I-95 corridor, the most favored window is in the 2-4pm time frame, while areas to the east are likely to see them a little later in the afternoon. Some areas, particularly DC and areas to the south, could see a few rounds of thunderstorms before the front fully crossed the region. The front should clear DC by sunset however, and then the storm threat will diminish into the nighttime hours as well. 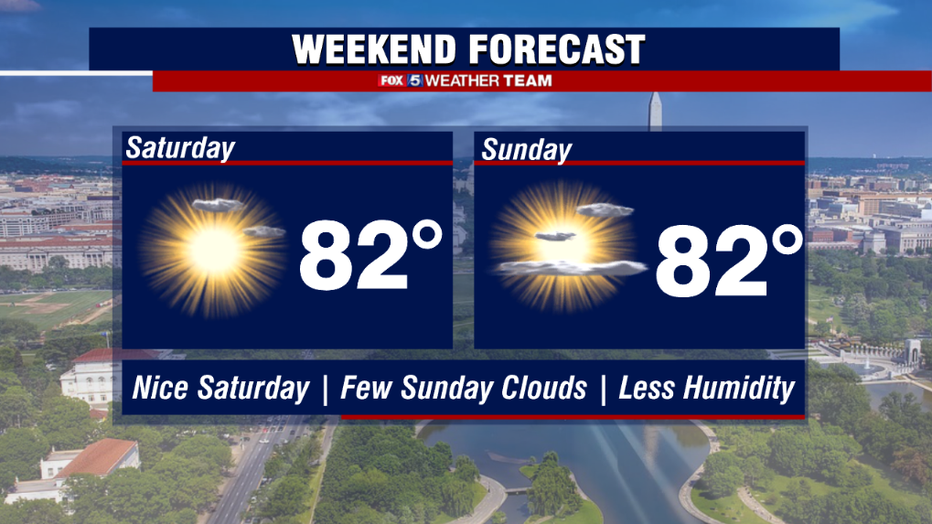 Once the front moves through, humidity and temperatures will begin to drop through the overnight hours and into the early morning hours of Friday, setting us up for a much more seasonal and pleasant weekend. It will still be warm, with temperatures expect to reach the lower 80s, but it will not be nearly as humid as the past several days as well. Still, the sun angle is nearing its peak, so even though we are not talking about middle 90s make sure you are piling ion the sunscreen if you are heading to the pool or the beaches. 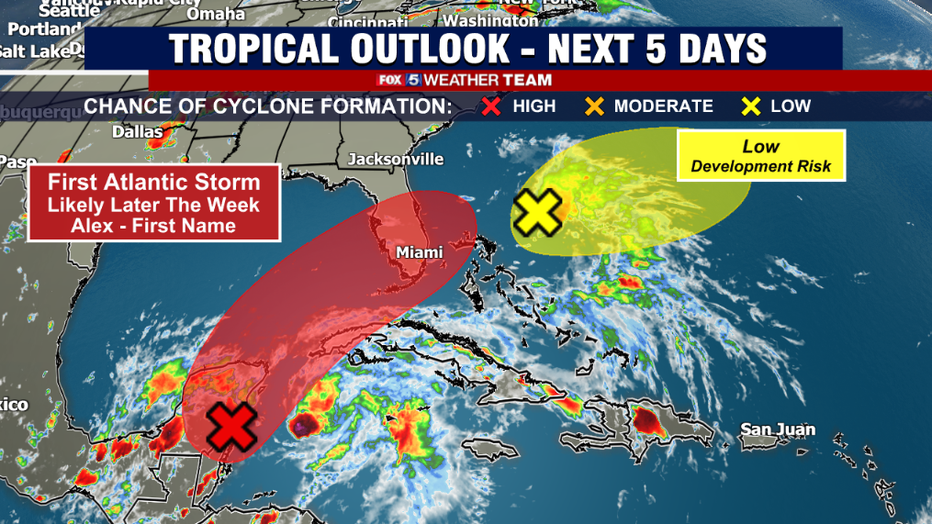 Speaking of the beaches, not only is June 1st the first day of meteorological summer but it is also the first day of the Atlantic hurricane season. We are already tracking not just one, but two areas of possible tropical development. The first is just east of the Bahamas and remains very unorganized, so the Hurricane Prediction Center is giving it a low threat of development. However, the remnants of what was once Hurricane Agatha in the Pacific, have made their way into the northern Caribbean Sea, where they are expected to develop into a new storm, which will be given the name Alex if it reaches at least tropical storm strength. This will likely lead to some soaking rains for southern Florida to start the weekend. The storm could then intensify as it enters the Atlantic east of Florida, potentially to hurricane strength, but should then turn northward out to sea. Local beaches will have to watch out for some higher than normal surf and dangerous riptides as the storm passes out to sea.