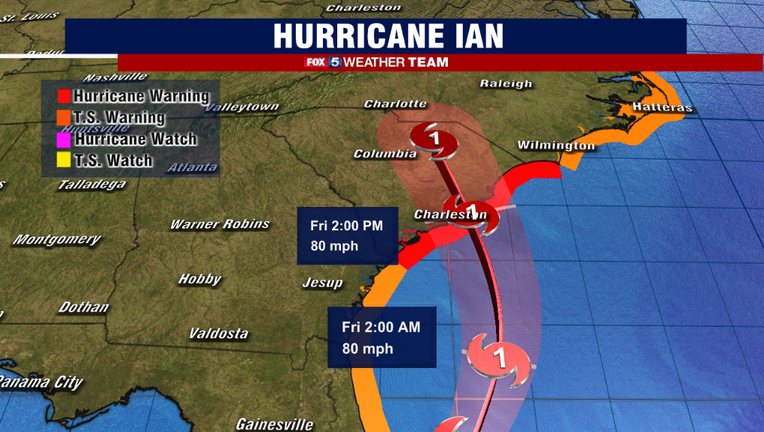 BETHESDA, Md. (FOX 5 DC) - Hurricane Ian entered the history books on Wednesday when it made landfall in southern Florida.

As things currently stand, it is the fifth-strongest storm on record to ever make landfall in the contiguous United States with sustained winds of 155 mph. Reports and photos from near where the eye made landfall have been nothing short of heartbreaking.

Structures and homes have been destroyed, lives have been lost, and millions will be without power for days as south Florida cleans up from likely the worst natural disaster to the state since Irma caused $50 billion in damages to the western Florida peninsula back in September 2017.

Irma remains the costliest hurricane in Florida history, though some early projections suggest Ian could surpass it.

Unfortunately, Ian's path of destruction is not done yet.

Though the storm weakened to a tropical storm early on Thursday morning, it pushed off the Florida's eastern coastline on Thursday afternoon.

As of 5 p.m. eastern time Thursday evening, the National Hurricane Center stated that Ian has regained enough strength to be considered a hurricane once again, with peak sustained winds of 75 mph.

Hurricane warnings were issued for the entirety of the South Carolina coastline, while tropical storm warnings extended throughout all of coastal North Carolina as well, including the Outer Banks.

The storm is expected to remain a hurricane into Friday, and is forecast to make landfall once again somewhere between Charleston and Garden City, South Carolina early Friday afternoon.

The National Weather Service is warning about 4-7 feet of storm surge across coastal South Carolina, with 2-4 feet of surge possible through the Outer Banks of North Carolina.

In addition, there is a high risk of flash flooding across interior portions of South Carolina, North Carolina, and southern Virginia as the storm comes ashore. 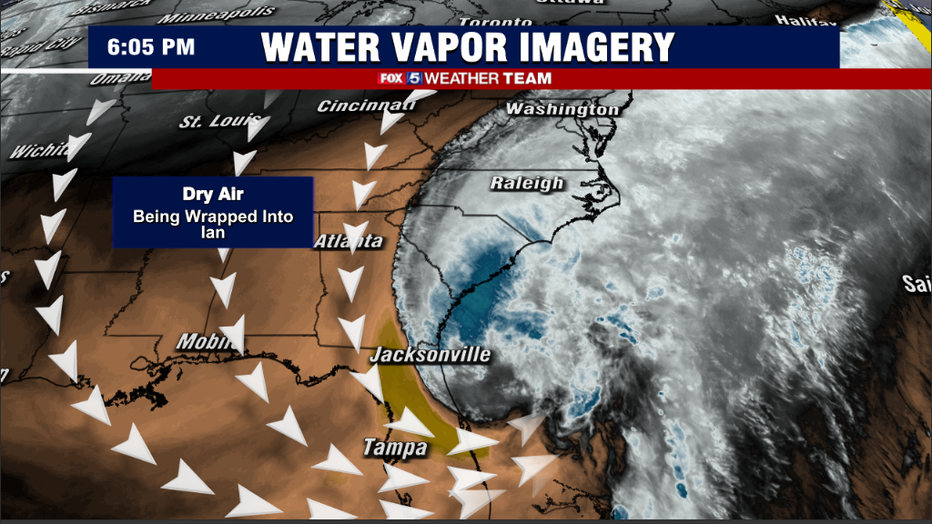 If there is any good news, it is that at this stage, Ian is not expected to intensify that much more. Unlike when it was off the coastline of southwest Florida where atmospheric conditions were ripe for explosive development, the storm has several factors working against this now that it has come farther north.

The first is a dip in the upper level jet stream across the northeast, which is increasing ambient wind shear in the region.

Wind shear is the change in speed and direction of winds with high throughout the atmosphere. Tropical cyclones need low wind shear environments in order to properly organize structurally for intense development.

In addition, a tremendous amount of Canadian dry air that was present across the Midwest and Northeast during the early week is being pulled southward on the western flank of the storm, and wrapped in towards its center. Dry air is heavier than moist air at the same temperature, and thus this intrusion of dry air into the core of the storm should limit too much additional strengthening. 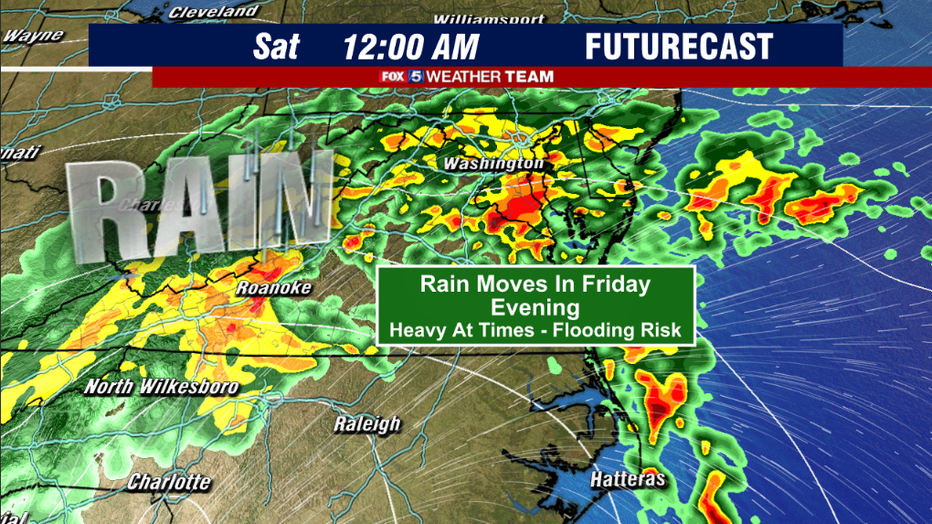 For the Washington, D.C. region, we will start to feel the impacts of Ian as early as Friday afternoon.

Rains will start first in our southern zones, and then work their way northward throughout the course of the evening hours.

Bands of heavy rain are then likely to continue through the evening ours right through the overnight hours of early Saturday. The National Weather Service has not yet issued any flood watches, but FOX 5 will continue to monitor forecast projections for our region. 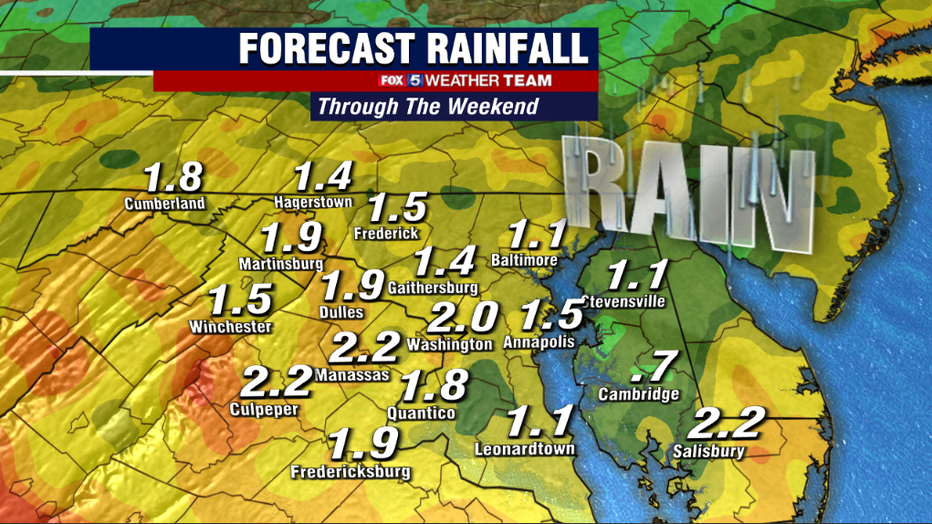 Latest guidance suggests 1 to 3 inches of rain will be possible for the D.C. region through the weekend, with the vast majority of it falling on Friday evening.

The National Hurricane Center notes that some of our southern zones, especially those in Southern Maryland and the Northern Neck of Virginia, could potentially see localized rainfall amounts of 2 to 4 inches of rain. We have had lots of questions about winds from Ian for our region, but because the storm is expected to rapidly weaken as it pushes inland, we are not anticipating any sort of destructive winds for our region.

It will remain breezy through the weekend, however, with peak wind gusts of 30-40mph possible as Ian's remnants pass our region. 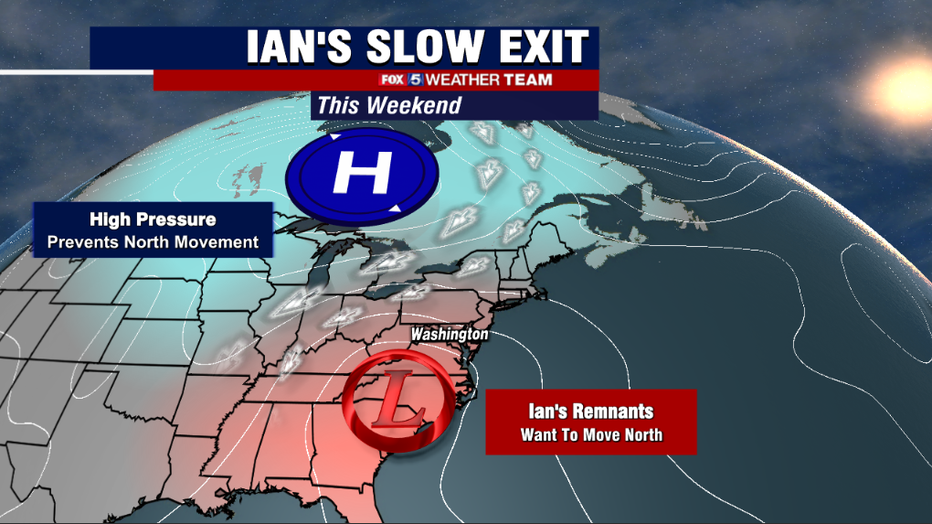 Speaking of the weekend, it is not looking like a particularly great one across the Mid-Atlantic region.

Ian will be on a northern trajectory, and in an ideal situation would pass by our area in a day or two.

Unfortunately, a strong area of high pressure will be building in across the Great Lakes through the weekend. These large areas of high pressure act almost like a wall atmospherically, which will slow Ian to a crawl over the Appalachian Mountains, before it will slowly get pushed eastward out to sea as high pressure sinks southward through early next week.

While it remains in our region, the D.C. area is likely to experience a lot of clouds, and scattered showers throughout the weekend. It will not rain every minute of the weekend, but it will not be particularly nice.

Saturday afternoon is the one time were we may see enough drying to even see the sun, but models suggest by Sunday morning, gray skies and light rain will overtake the region once again.

With the strong northeast winds, it will be a very cool weekend as well, with highs only in the 50s and 60s for many. 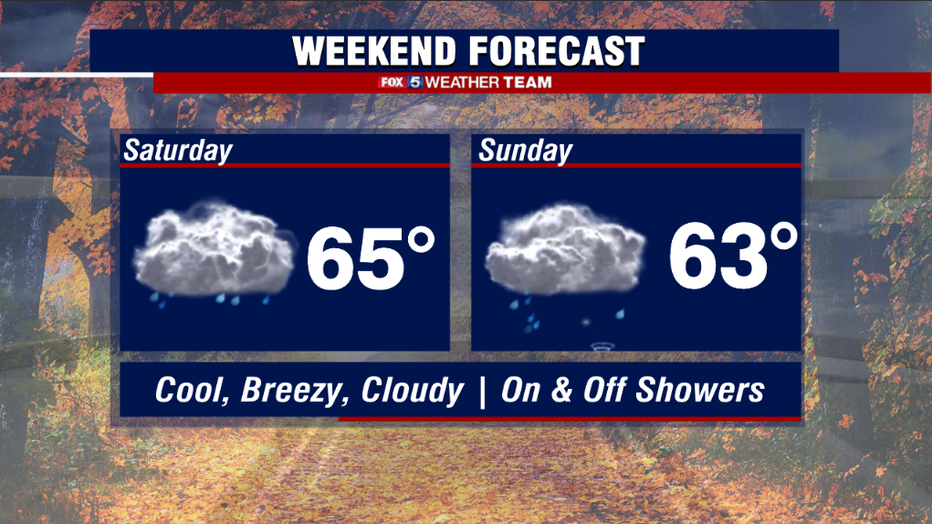 We will continue to keep you up to date through the weekend, as Ian's remnants cross our region.

Stay with your FOX 5 Weather Team for the latest!