After some of the best weather around here in weeks this past weekend, summer has officially begun on a quiet but noticeably more humid note.

The quiet pattern is about to come to an end, however, as the D.C. region gets squeezed in between two weather systems. 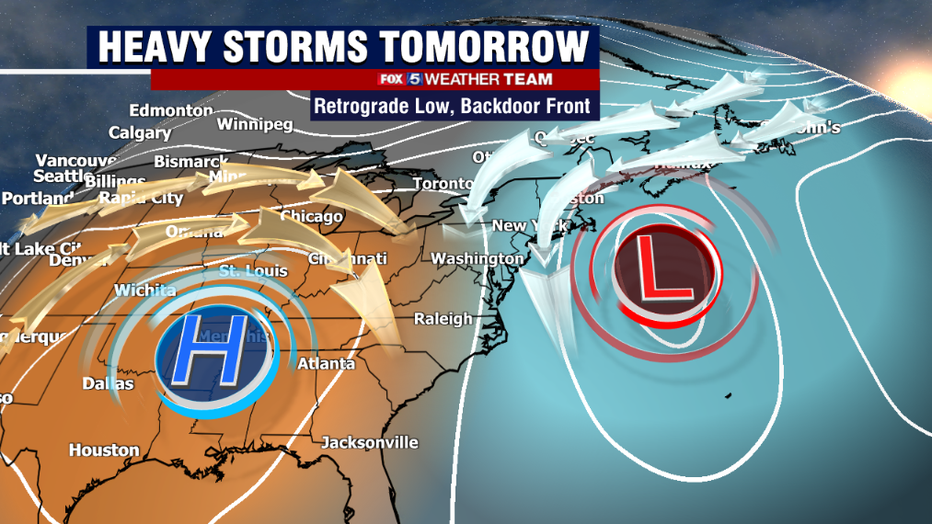 The upper high has been responsible for the persistent heatwave across the center of the country over the past couple of days. Tomorrow morning, it will be close enough to the D.C. region to pump in more heat, with some areas near 90°, and more humidity, which is moisture that the storms will tap into. By the afternoon and evening, this upper high will shift to the Southwest, which will allow room for the upper low to make a "retrograde" move to the southwest as well. 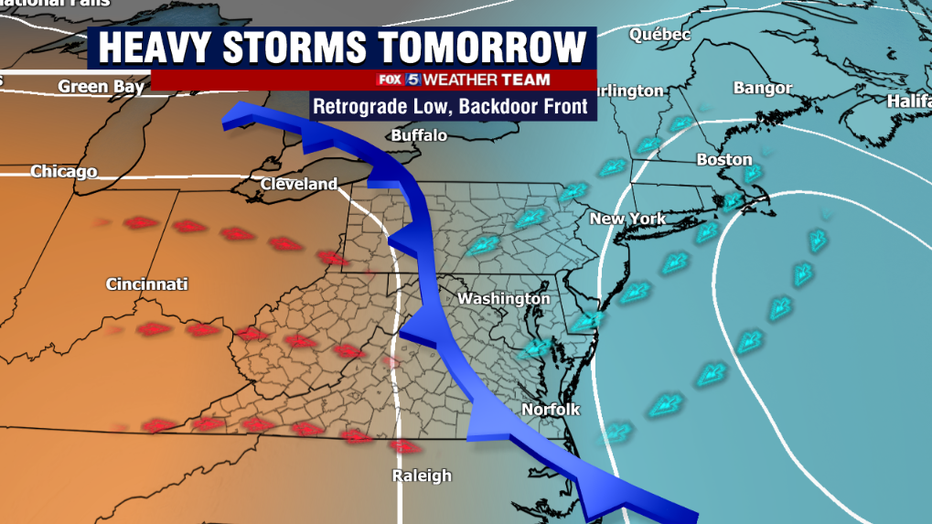 This western shift in the upper-level low will lead to the formation of a cold front coming off the colder Atlantic waters off the coast of New England, to our northeast, which will push to the southwest throughout the course of Wednesday afternoon. This frontal zone will be a zone of surface convergence, where warmer and more humid southwesterly winds will run into the cooler, heavier northeasterly winds as the front pushes inland. As the heat of the day builds near this frontal zone, showers and storms are expected to fire and expand on it through the afternoon hours. 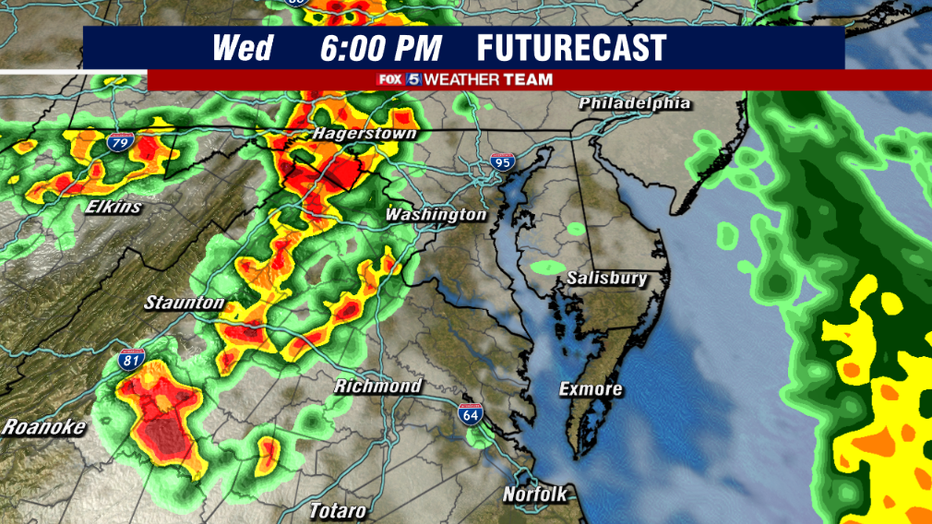 The latest model guidance we have into the weather center suggests that storms will be possible anytime after about 2 p.m. tomorrow, but they really start to expand in coverage closer to the 4-6 p.m. window. Most suggest that our western zones, closer to the I-81 corridor, will see the brunt of the action during the late afternoon and early evening hours. 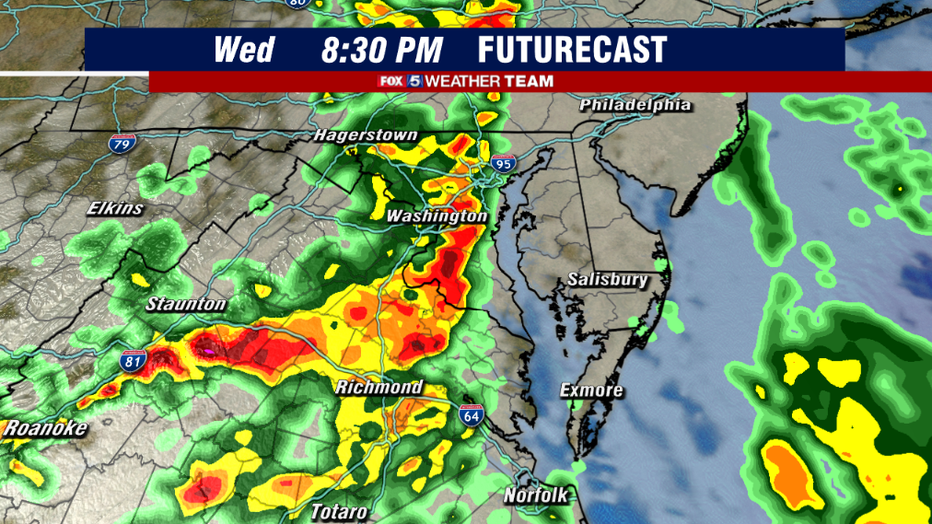 The more recent guidance has progressively shifted this heaviest line of storm formation to the east throughout the evening, pushing closer to the I-95 and D.C./Baltimore corridor in the 7-9 p.m. time frame. While we cannot promise it, most of the computer guidance this evening is suggesting that we might avoid the worst of the weather until after the evening commute. The nighttime hours, however, could be a soaker that goes right into the overnight hours. 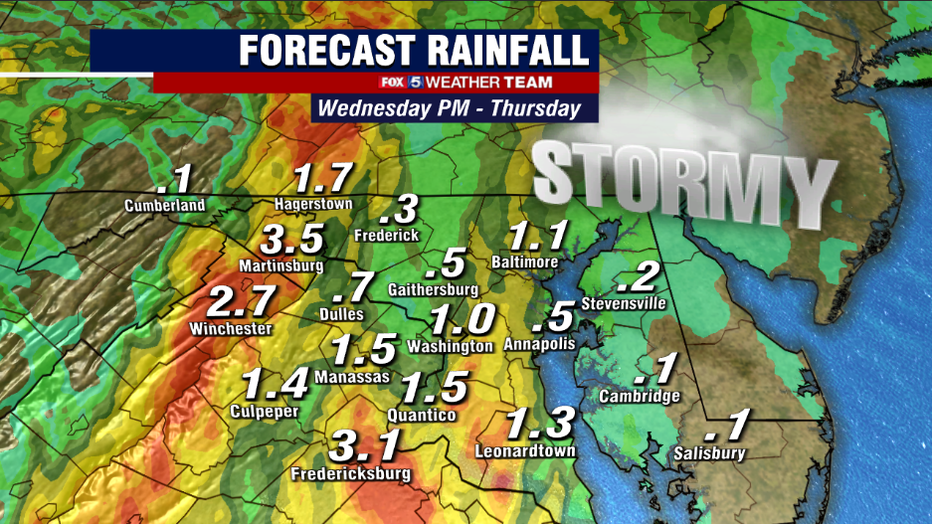 Because of mid-level winds turning out of the north with the upper-level low-pressure system, tomorrow's storms will have a rather odd distinction of moving north to south. This is contrary to the more typical storm track of west to east or south to north that we typically see in this area.

When storms do this type of motion, they have the distinction of being slow movers. The current forecast suggests precipitable water, a measure of how much moisture is available for storms, may exceed 2 inches tomorrow night, meaning the threat for some extremely heavy downpours. Model projections suggest that scattered areas could see 2-4 inches of rainfall out of the heaviest storms. The possibility of "training" thunderstorms, or multiple thunderstorms that fire over the same area, is a concern as well. 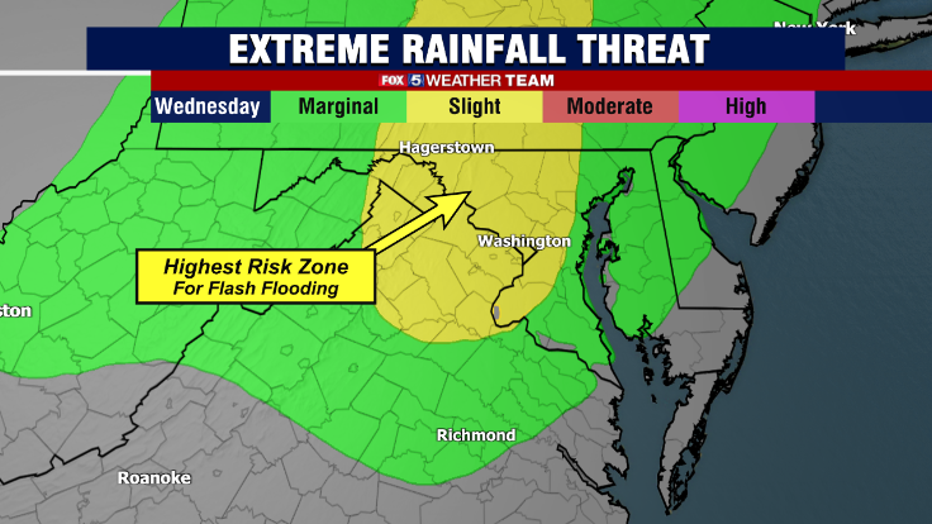 For this region, the National Weather Service today placed our region under a "slight risk" for excessive rainfall. This is just their method of highlighting areas that are at the greatest threat for the potential of flash flooding. While a flash flood watch has not yet been issued, we expect that at least part of our region will be covered in one either late tonight or tomorrow morning. Those that live in flood-prone areas should take proper precautions. And remember to turn around, don't drown if you come across any flooded roadways tomorrow night. 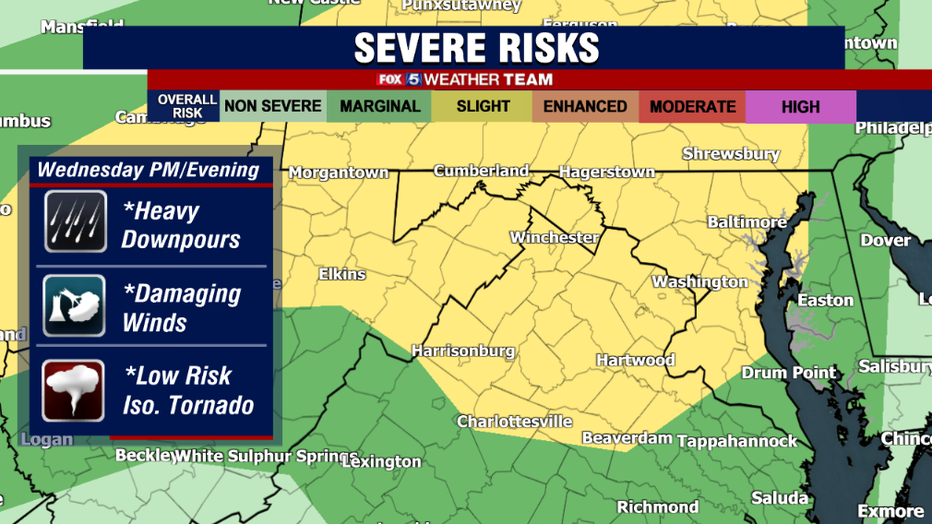 While flash flooding is the primary concern that we have tomorrow, some storms could also be on the strong side. This morning the storm prediction center placed our region under a "slight risk" for severe weather, meaning they expected a few scattered storms to possibly contain some large hail or perhaps some damaging winds. While they are not very common with north to south moving thunderstorms, the National Weather Service has stated that they cannot rule out the risk of an isolated weak tornado either. 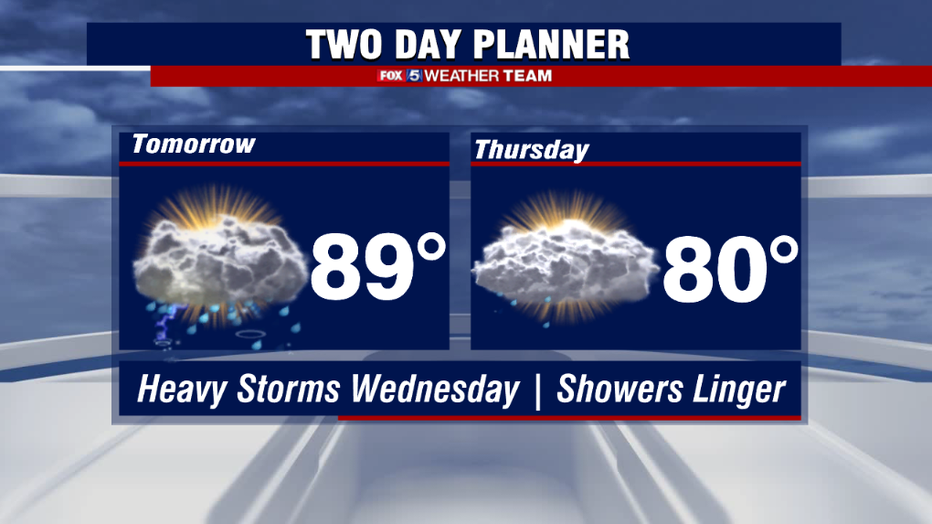 While the rain should lighten into the overnight hours of Wednesday into Thursday morning, the frontal boundary and convergence zone will likely be a little stubborn to move out of our region. The biggest change to our forecast this morning was actually for Thursday, as showers could reform around sunrise on Thursday, and we could start the first half of the day clouds with showers. While it's still expected to be humid, this could really hold back temperatures on Thursday afternoon, as many are now forecast to stay in the 70s all day long.

The second half of the day is expected to dry out, however, with skies clearing into the evening hours. Friday brings back the heat, humidity, and more sunshine that is expected to remain through the first weekend of summer ahead!