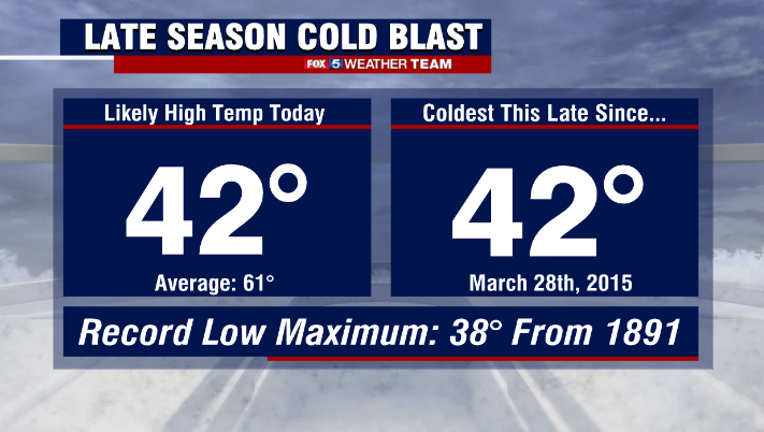 WASHINGTON - It seems to be opposite year, as March decided to come in like a lamb, but go out like a lion. After a weekend that featured snow showers and graupel storms, many across our region woke up to widespread 20s with wind chills dipping into the teens.

Gwen Tolbart has the FOX 5 Weather forecast for Tuesday, March 29

Reagan National dropped to 30° this morning and this afternoon reached only a high of 42°, making today our coldest day this late in the season since 2015. Tuesday morning will likely be even colder, with low to mid-20s expected for much of the region.

Winter's revenge has certainly sent us quite the wallop here in early spring. Winds have been brutal as well, with gusts over 40mph reported on Monday afternoon. 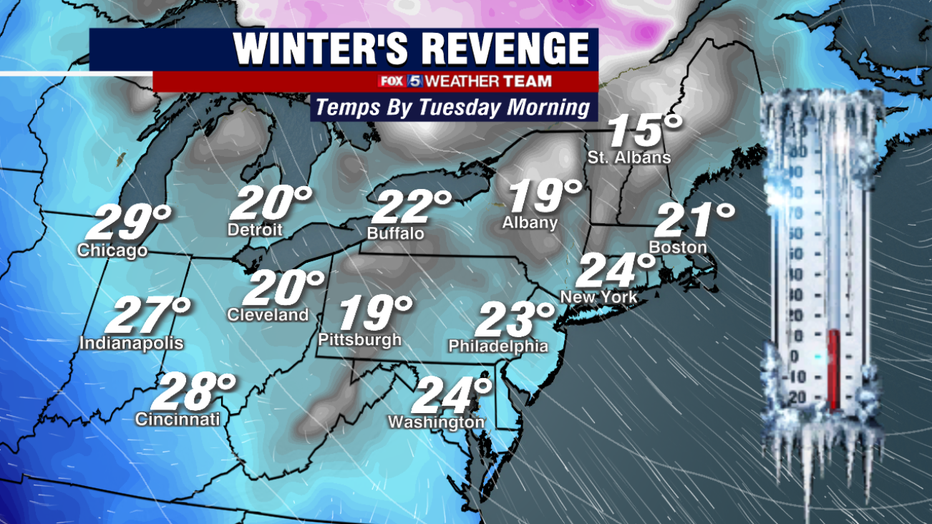 Last night's temps got very close but stayed just above. Tonight will have a better chance of surpassing that threshold, although all the blossoms will not suffer damage just because temperatures hit these levels. There will undoubtedly be a good number of blossoms that survive.

The bigger concern today is likely the winds. With the pedals now in peak bloom and exposed, it does not take much wind to bring down some of those pedals.

Gusts over 40 mph have likely brought a good number of the pedals down, but thankfully winds will be more manageable tomorrow. 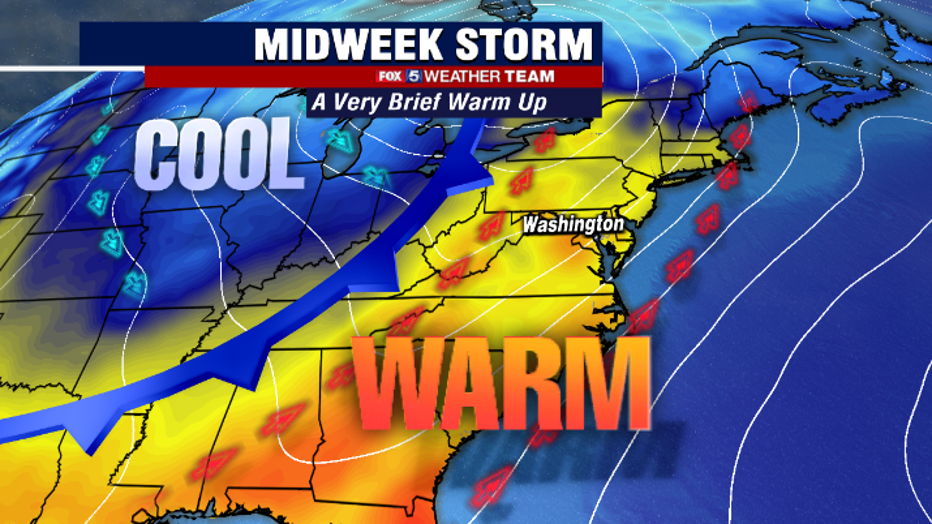 We are also only three weeks away from average highs reaching the 70s. This week, we may see some 70s, though it is likely to be a short-lived warmth. Wednesday, a strong storm system will develop across the south and push northward into the Great Lakes.

Just like last week, severe weather will be a major story across the south, with the threat of a tornado outbreak for many of the same areas impacted by last week's system.

Warm air surging northward ahead of this storm should get our temperatures into the lower 70s by Thursday afternoon, assuming we are able to squeeze in some sunny breaks. 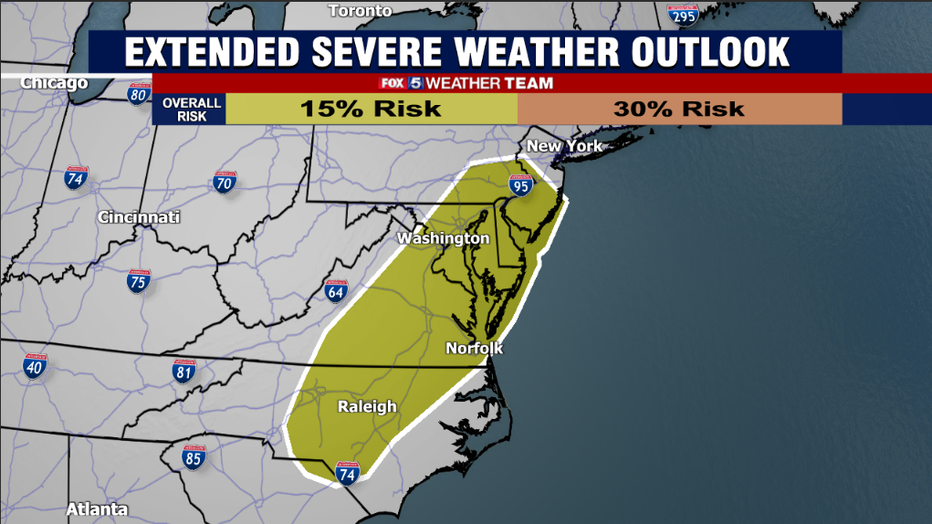 By Thursday evening, we will have to have our guard up for some severe weather of our own. Another strong cold front will sweep our region and, if temperatures do get as warm as expected, a line of thunderstorms with some gusty and potentially damaging winds will be possible.

As if the cherry blossoms did not have enough to worry about, right? There could even be an isolated tornado or two in the region, but the details on who will be at the greatest risk for these will be worked out in the week ahead.

The Storm Prediction Center this morning placed our region under a severe weather risk for Thursday, just their way of giving an early heads up that it could be a day to watch. 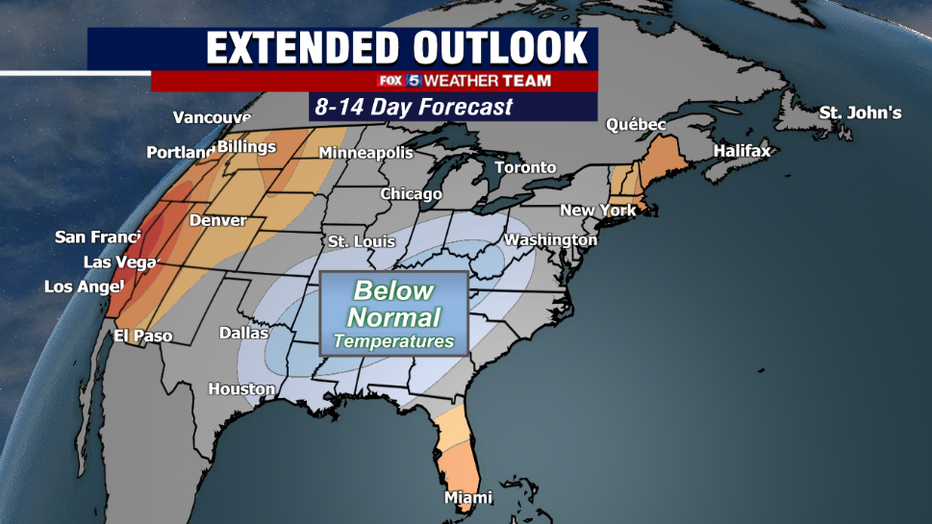 Beyond the midweek storm, temperatures should cool down once again, though not to the same extreme as what we are seeing early this week. Extended guidance suggests that 50s and lower 60s will be favored through the first weekend in April, with more seasonally mild conditions through much of next week.

We may have to wait until the middle of April before we start to see long stretches of 70s and some 80s coming back into the picture. I said before that we were spoiled by that long stretch of 70s in the middle of March, and we are paying for it now!

That type of weather does become much more common as we head toward the middle of next month. Hang in there! 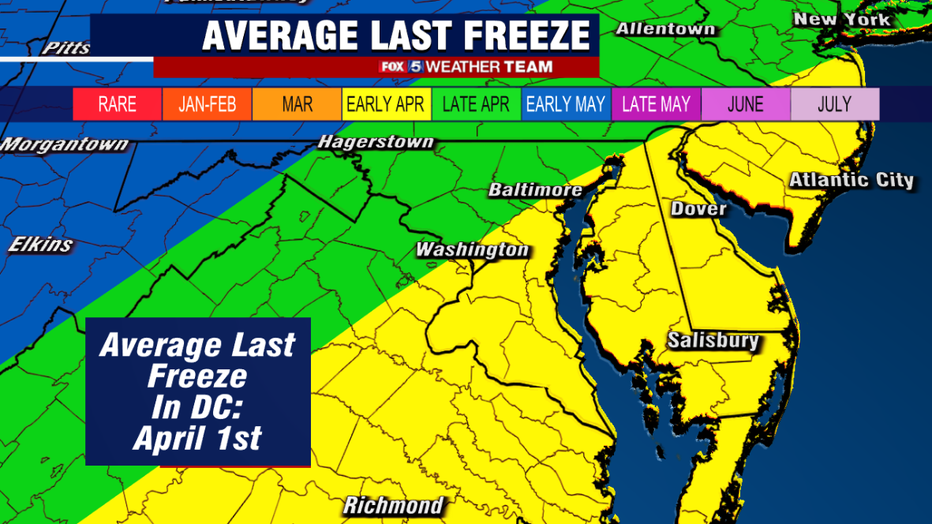