Prepare for one of the hottest weekends in D.C. in recent memory!

The District is currently dealing with the first official heat wave of the season. For the record, the National Weather Service defines a heat wave here in Washington, D.C. as three or more days of 90° or greater temperatures. The heat has so far peaked on Thursday afternoon as the mercury hit 95°, but with added humidity the heat index, which is what it feels like outside when the temperature is combined with the humidity, peaked at 102° just before 2 p.m. in the afternoon.

What is to blame for all of this heat? 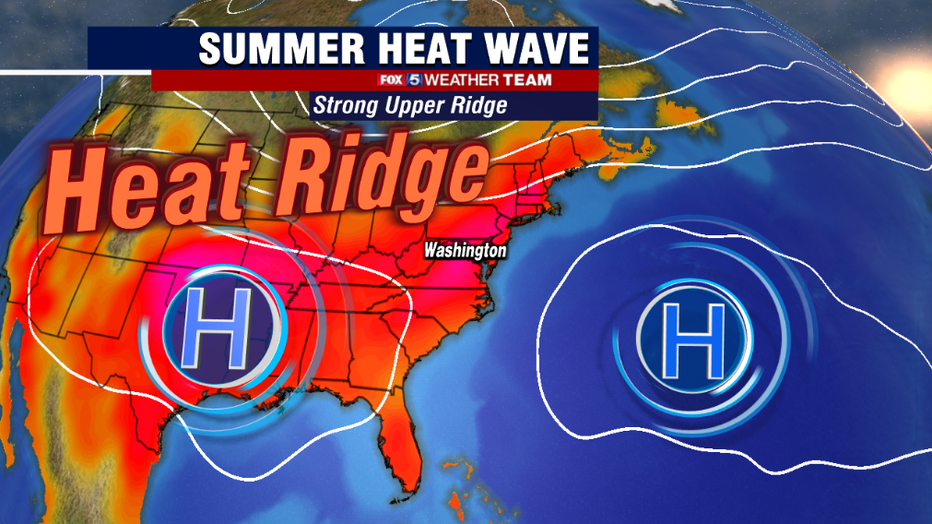 Well, you can take two slow-moving, upper atmospheric weather features known as high-pressure ridges for the extent of this heat. When they come during the summer months, they are commonly referred to as heat ridges. There are two of them, one of which is located near Bermuda, which is a very common weather feature during the summer months. It is working in conjunction with an intense amount of high pressure over the Southern Plains. These large areas of high pressure promote sinking air, which promotes more blue skies and bright sunshine while limiting cloud cover and afternoon storms. This allows for more intense heating of air masses across the southern United States with the high summer sun angle, which then gets pushed northward on the back of some southwesterly winds. Throw in a little of the Atlantic and Gulf of Mexico humidity, and you have all the ingredients of a long stretch of hot summer weather. 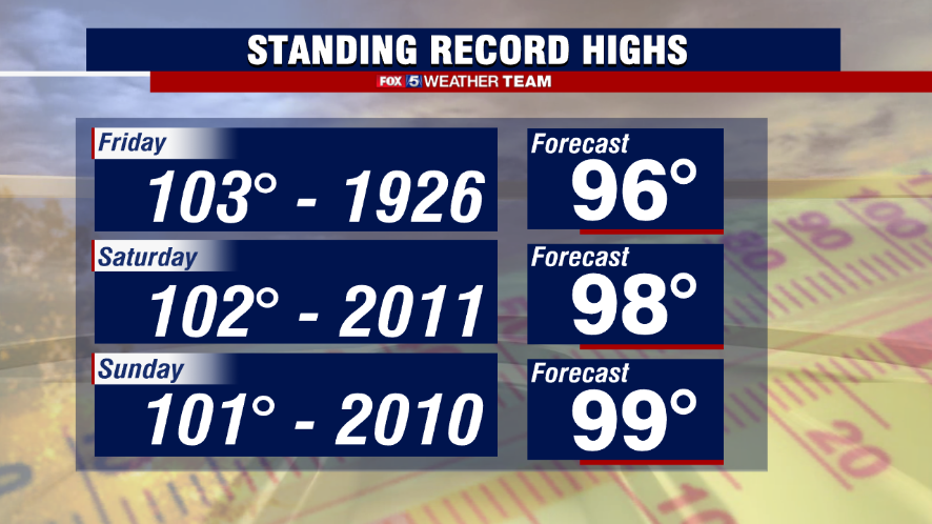 So how extreme is this heat wave for our area?

In terms of length, it is really not all that uncommon for us to string together the 90 degree days this time of year. The current heat wave started on Monday, when our temperature hit 92 degrees in the afternoon. It is forecast to go through next Monday, which would be an eight-day-long heat wave.

Last year featured similar stretches of heat, with the longest heat waves in the summer of 2021 being two cases of seven-day-long heat waves, and one six-day-long case. This pales in comparison to the summer of 2020, where D.C. saw a heat wave from late June to mid-July that stretched for twenty days, the second-longest streak on record. What is notable about this heat wave is the intensity of the heat, particularly this upcoming weekend.  In the last decade, D.C. has only seen temperatures exceed the 99 degree mark a total of twenty times, and sixteen of those cases were split between two years, 2012 and 2016.

D.C. has already done it once this summer on June 17th, and we will be awfully close to that number again on Saturday and Sunday. Potentially Monday as well. Triple digit heat is even possible, something D.C. has not recorded since August 2016. Sunday in particular could threaten a record 101 degree record that has stood since the extreme summer of 2010. 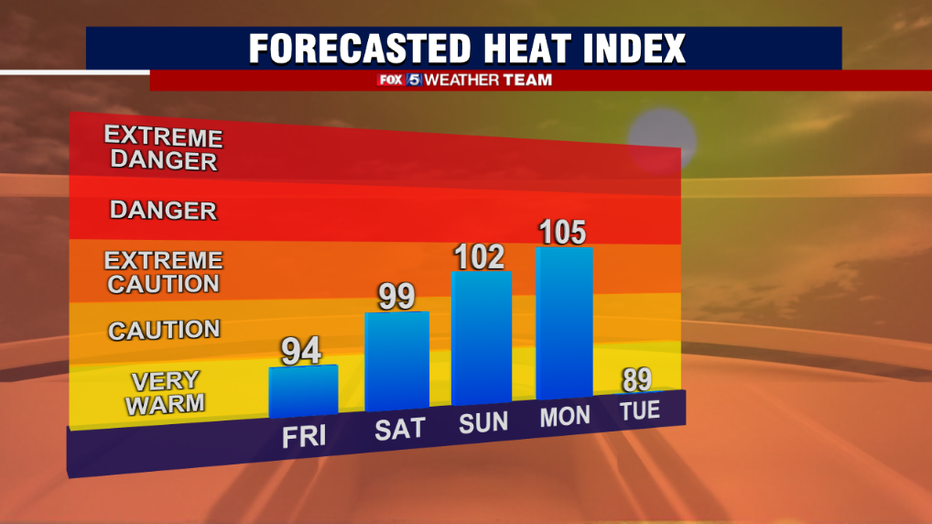 What could keep us from hitting the 100 degree mark? Believe it or not, humidity. A moist air mass is actually harder to heat than a dry one. Too much humidity Sunday and Monday could keep those temperatures below the century point. That would do little for heat relief, however. Ask anyone from the desert American Southwest, and they will tell you that they will take a 120 degree dry heat day in Phoenix over a 90 degree high humidity day in D.C. region anytime. While we will get a break from this humidity on Friday, it will rise again on Saturday, and be back at dangerous levels on Sunday and Monday when the heat index could peak between 102-108° in our area. These are heat advisory levels. 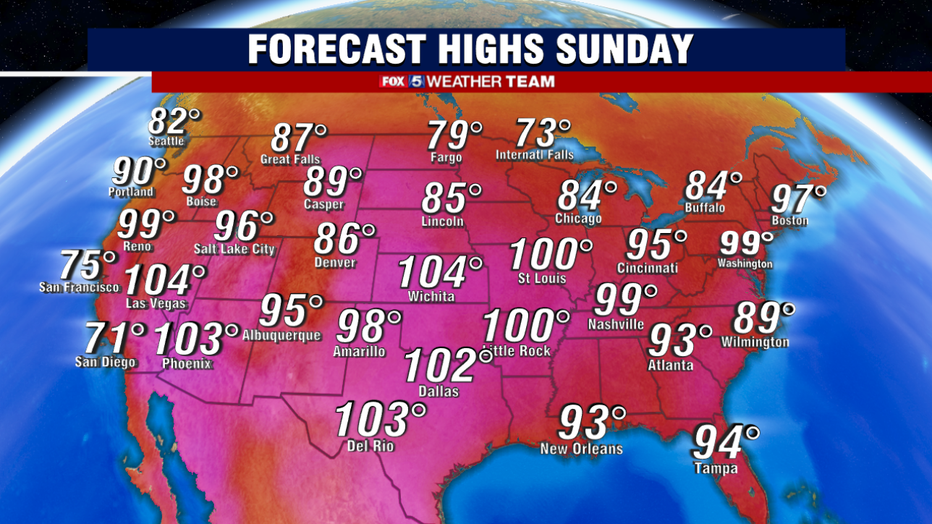 But why is it that more moisture in the air actually makes it feel hotter, even if it holds air temperatures down? You can blame the human body for that.

Our body's natural air conditioning system is sweat. When we sweat, the process of the moisture evaporating from the surface of our skin is what actually makes us feel cooler. When the air mass is saturated however, it is more difficult for the sweat to evaporate as efficiently, and so the body retains more heat, making it feel even hotter. This is what they "heat index" values are made to represent. 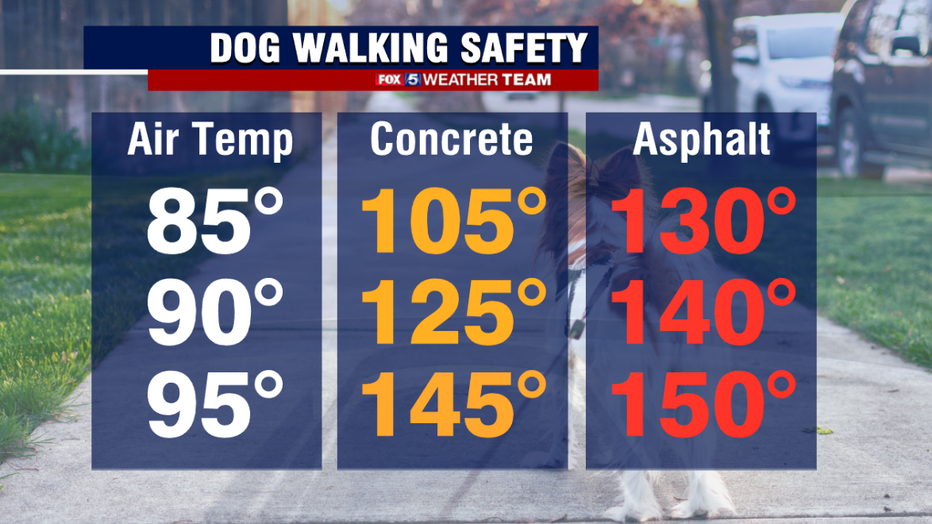 One very susceptible group during heat waves is the family pets. Dogs and cats do not sweat like the average human does, and most are covered in their own furry sweater that they keep on at all times, making it even more dangerous for them in the heat. It is always recommended that you walk your pets during the coolest time of day during the summer, the morning hours near sunrise or even a couple of hours after sunset.

Walking them during the peak heat of the afternoon can quickly lead to heat exhaustion in pets, especially when temperatures are pushing 100 degrees. Another big concern with the high sun angle is just how hot that ground is on their paws. Blacktop temperatures can easily exceed 150 degrees on a middle 90 degree day with full sunshine, and at that temperature dogs can burn their paws in less than a minute. Also remember never to leave pets unattended in cars during this hot weather. Please be safe with your beloved pets in this heat! 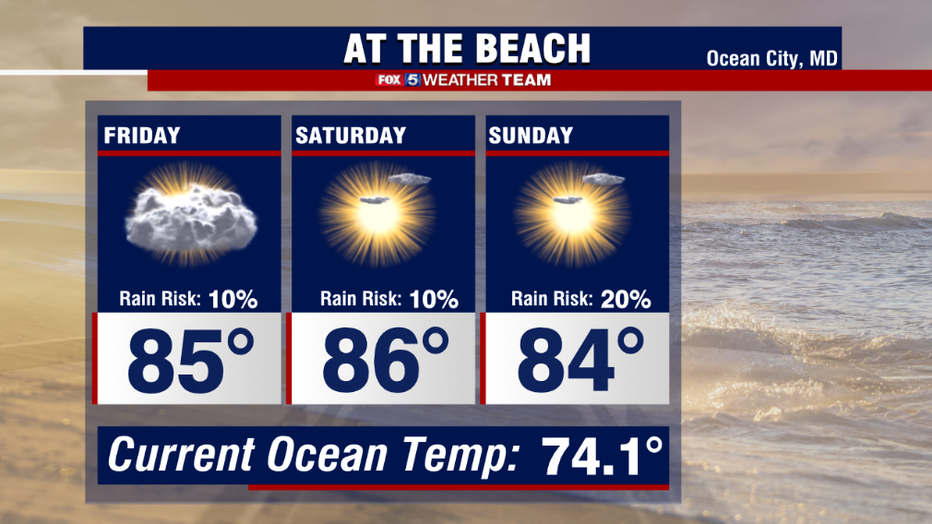 The best place to beat the heat this weekend may be the beaches! The cooler ocean breezes should keep areas like Ocean City, MD well below the levels we will be seeing here in the D.C. region. Plentiful sunshine and humidity will certainly make it feel like the 90s, but with the ocean temperature in the lower 70s it is a quick and easy way to stay cool! Storm chances are very low at the beaches this weekend as well. Perhaps, a pop-up shower or storm on Sunday, but beach goers overall will have a great weekend to enjoy. 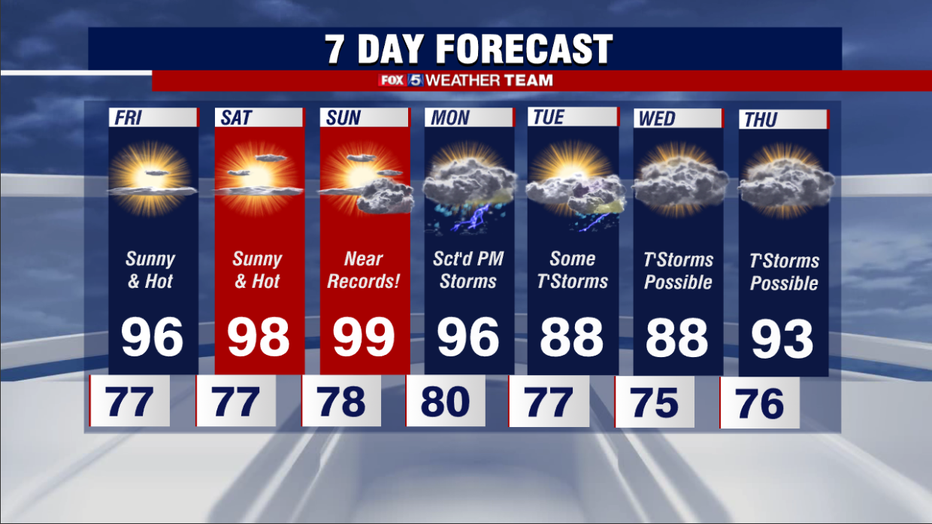 This heat wave is expected to peak temperature wise on Sunday, but the worst day of the bunch may in fact be Monday when it comes to humidity. A cold front will be pushing into the region from the northwest. As dry air gathers behind it, low-level moisture will "pool" along the front up ahead of it. This could send dew points soaring into the middle 70s, which is extremely humid and uncomfortable. Even though temperatures are only expected to peak in the middle 90s, it may very well feel like 105-110 degrees for a period of time during the afternoon, which would mean heat advisories would be needed Monday as well.

In addition, as the front itself passes on Monday evening there is the potential that it could fire up some strong to severe thunderstorms along it which could impact parts of our area. Stay tuned to FOX 5 through the weekend as the weather team monitors that threat. The heat wave should end on Tuesday as forecast highs return to the 80s, but just briefly. Longer range weather models suggest we will start another heat wave the second half of next week.