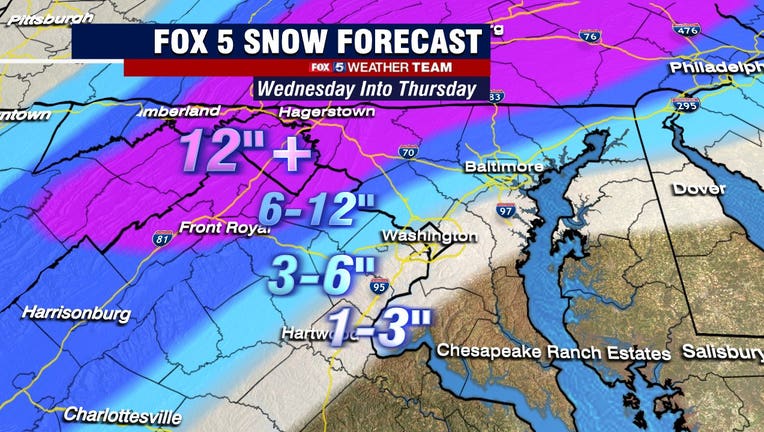 WASHINGTON (FOX 5 DC) - It seems like it has been quite some time since D.C. has had to deal with a decent winter storm. In reality, it has been about 2 years.

January of 2019 brought a 10 inch snow storm to downtown D.C. while some north of town picked up over a foot of snow. December storms on the other hand, those tend to be a little bit more rare.

Mike Thomas has the FOX 5 Weather forecast for Tuesday, December 15

The last one that really stands out to me is December of 2009, where in the week before Christmas the region picked up on 10-20 inches of snow. While the storm later this week is unlikely to match the intensity or the widespread heavy snowfall amounts of the December 2009 Blizzard, some northwest of town may see snow totals approach similar levels.

It is all expected to begin on Wednesday late morning into the early afternoon.

A strong storm system will approach the region from the south. As the storm will have its origin in the Gulf of Mexico, moisture will be prevalent as it pushes northward.

With a cold, dry air mass in place over our region initially, the storm is expected to start as snowfall along the I-95 and for western zones as well, while eastern zones where warmer air will be present are likely to begin as rainfall. 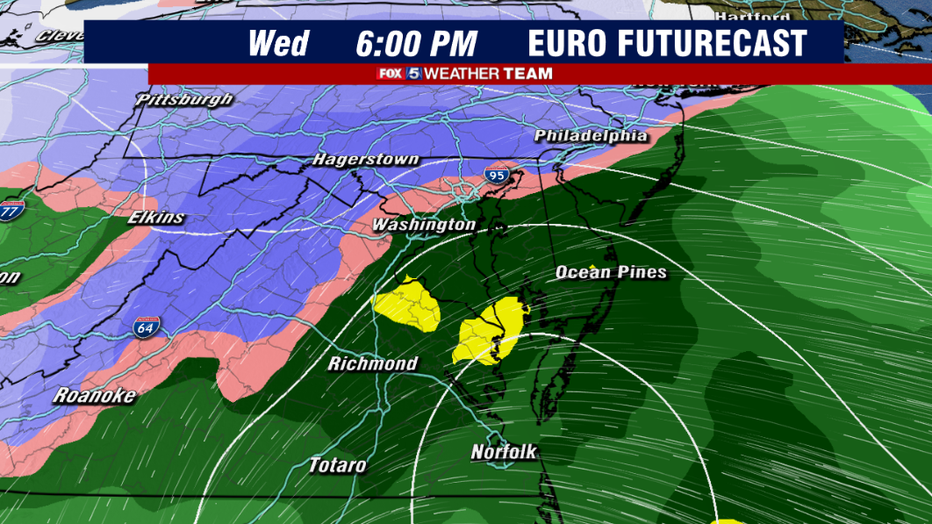 The middle to late afternoon hours are where things get tricky. As the storm strengthens and pushes northwards towards the lower Eastern Shore.

Warm air is expected to mix into the middle layers of the atmosphere and change snow over to a period of mix, sleet, and eventually all rain for the I-95 corridor.

This transition is likely to take place during the early afternoon hours, and last though the middle evening hours.

The biggest questions that remain with this storm is just how far to the northwest the rain/snow line will march.

This will be the main factor in just how much snow falls locally. The European model for example, shown above, shows the rain/snow line reaching as far north as Frederick, MD by the late afternoon hours. 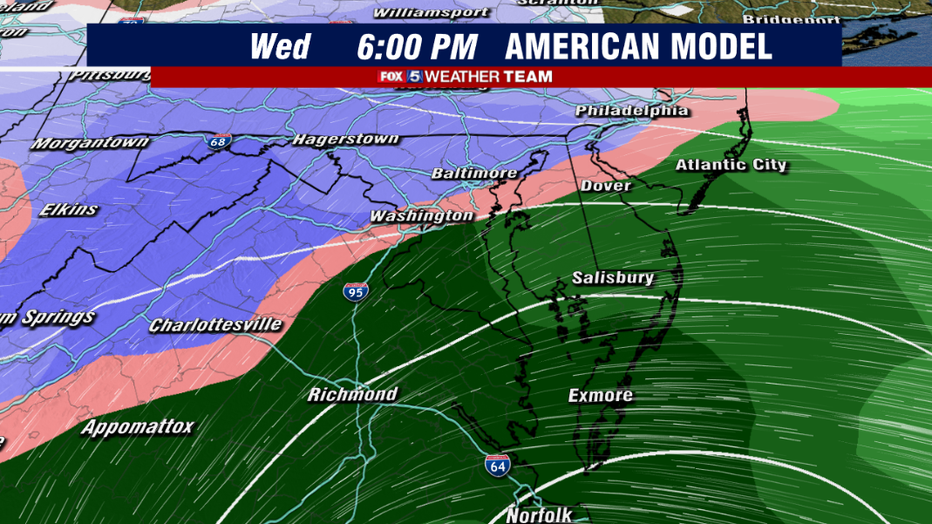 By comparison another weather model we commonly utilize, the American model, shows cold air more entrenched across the D.C. region.

It only brings the rain/snow line as far north as the I-95 before a transition back to snow pretty quickly into the evening hours for the metro area.

If this is indeed the case, snow totals would be higher for the I-95 corridor.

So you can see why nailing down the details on this rain/snow line is absolutely key to the snowfall totals around the immediate D.C. area.

Both models have it as an all snow event for the majority of the I-81 corridor locally where cold air will be more entrenched. 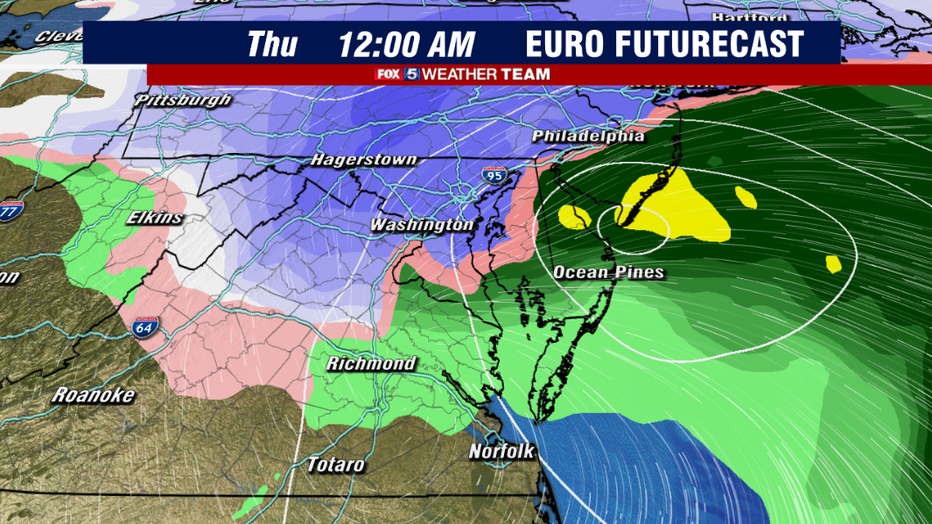 The key times for us here in Washington will be between sunset on Wednesday and sunrise on Thursday.

This is when models march the rain/snow line back down to the southeast and bring the I-95 corridor a period of moderate to heavy wet snow. THIS is when the bulk of snow accumulations for the I-95 corridor would be most likely to occur. 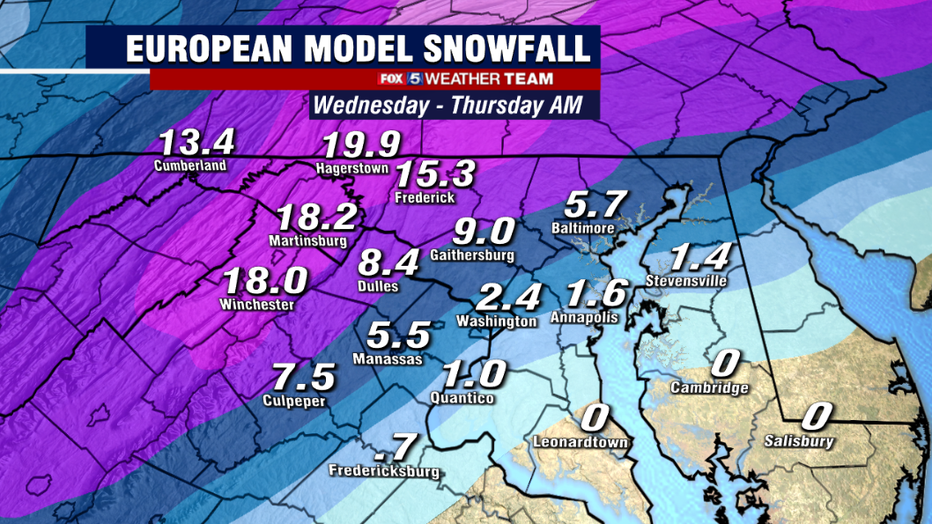 So how much snow is going to be possible? The areas where there is the most agreement at this stage is the I-81 corridor, where widespread 6-12"+ snowfall amounts are expected.

On the opposite end of things, models are in agreement that southern Maryland, the Northern Neck, the lower Eastern Shore likely will not see much of anything at all with this storm winter weather wise.

The bulk of the event will be a cold rain. It is everything in between that remains in question. How long will it be rain here in D.C.? How far northwest will it push? If the European is right, then then DC area is looking at the lower end of the totals, and most around the beltway likely end up between the 2-4" range. 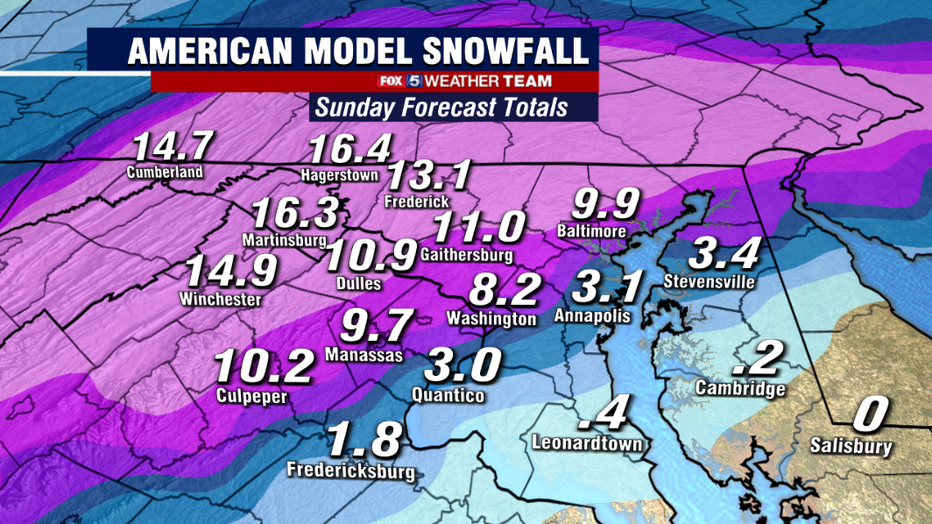 If on the other hand, the American model is correct, and the rain/snow line does not push far past the I-95 corridor, and the chance back to snow happens faster during the evening, then the potential for a more sizable snow for the immediate metro area is in the card.

These details will need to be worked out over the next couple of days. It is going to be a very tough call for the immediate I-95 corridor.

This afternoon, Winter Storm Watches were extended to counties just northwest of the District.

These are the zones where the National Weather Service believes that the highest probability of 5" or more snow will be likely between Wednesday morning and Thursday morning.

WATCH FOX 5 DC FOR THE LATEST

This of course can all change in the days ahead, so be sure to keep it turned to your FOX 5 Weather Team. We will keep you ahead of the first storm of the 2020-2021 winter season.