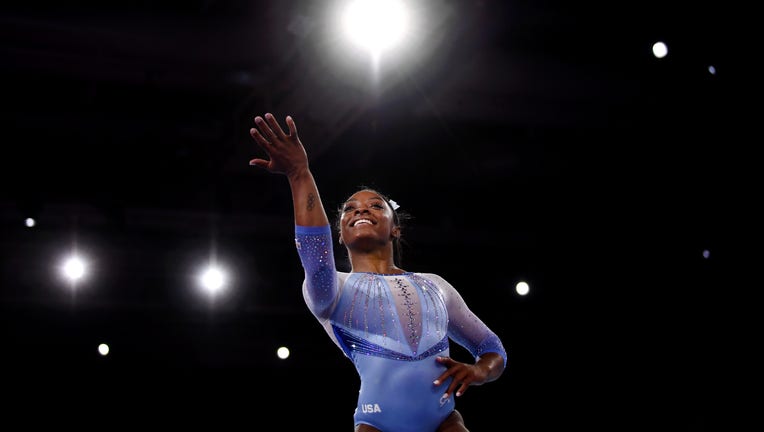 Simone Biles of USA performs on Floor during Women's Qualification on Day 2 of the FIG Artistic Gymnastics World Championships on October 05, 2019 in Stuttgart, Germany. (Photo by Laurence Griffiths/Getty Images)

STUTTGART, Germany - Simone Biles has, inevitably, done it. The 22-year-old has become the most-decorated gymnast at the world championships among both men and women.

The U.S. gymnast broke the all-time record at the world gymnastics championships in Stuttgart, Germany, on Sunday when she secured her 24th medal at the event, beating the record for most world medals by men or women, previously set by Belarusian men's gymnast Vitaly Scherbo.

Less than two hours later, she earned a 25th medal.

Biles scored 15.066 on the beam after an almost flawless routine, going for a simpler dismount than the double-double she performed earlier in the championships.

Often described as the greatest gymnast in history, Biles was only briefly tied with Scherbowhen she won her 23rd medal on Saturday following a thrilling performance on vault. Of her 24 career world medals, 18 are gold, against 12 of 23 for Scherbo.

She placed fifth on uneven bars on Saturday, ended any chance she had of winning a medal in all six events — which she did last year in her comeback world championships after a sabbatical in 2017.

Earlier in the week, Biles broke the record for most individual medals overall by a woman at the world championships. She broke the tie with Russian gymnast Svetlana Khorinka.

Before becoming the most-decorated world championships gymnast among both men and women, Biles told The Washington Post on Tuesday she believes it's "really impressive for someone to be able to do that; I guess that’s me."

“I haven’t got a chance to process it yet, but I think we’ll do some celebrating tonight for all of it — for the team, for the medal count, for the fifth year in a row.”

"Every year, it feels better and better just because we're adding to the legacy," Biles told reporters. "I feel like I never think of records. I just go out there and do what I came to do, which is compete for the country."