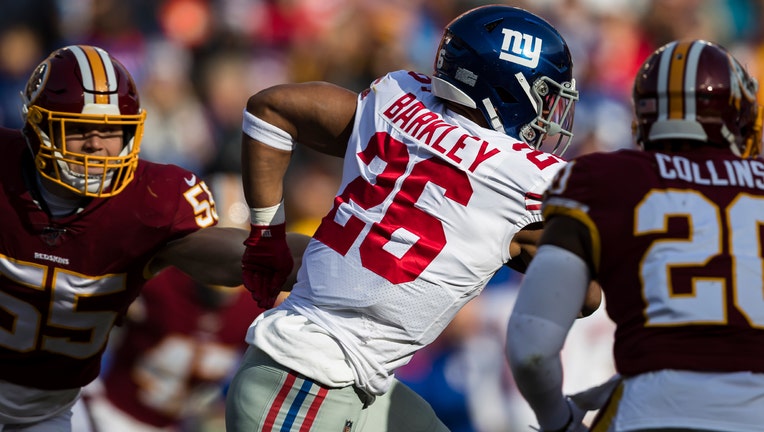 Saquon Barkley #26 of the New York Giants carries the ball against the Washington Redskins during the first half at FedExField on December 22, 2019 in Landover, Maryland. ( Getty Images )

LANDOVER, Md. - First, the bad news: Giants running back Saquon Barkley only needed 22 carries to gash the Redskins for 189 yards on the ground Sunday.

Now, the good news: The Redskins season is almost over. And  they have a worse record than the Giants with just one week left in the 2019 campaign.

There were plenty of fireworks in Sunday's late-season matchup between the Giants and Redskins on Sunday at FedEx Field.

Dwayne Haskins lit up Big Blue early only to reinjure his ankle later, backup quarterback Case Keenum led a late-game rally, and there was even an overtime.

But Barkley and Giants quarterback Daniel Jones (who threw for five touchdowns) were simply too much for the Burgundy & Gold today.

That might be OK for the Redskins though, who at 3-12 now have an even stronger draft positioning heading into the offseason. They had the same record as the Giants before Sunday's head-to-head loss.

The Redskins wrap up their season next week at Dallas, who as of this writing are fighting the Philadelphia Eagles for the NFC East title on Fox 5.

You can catch the Skins season finale at 1 p.m. Sunday on Fox 5. And be sure to watch Redskins Game Time at 7:30 a.m. next Sunday for one last pregame show.

Here are the highlights from today: