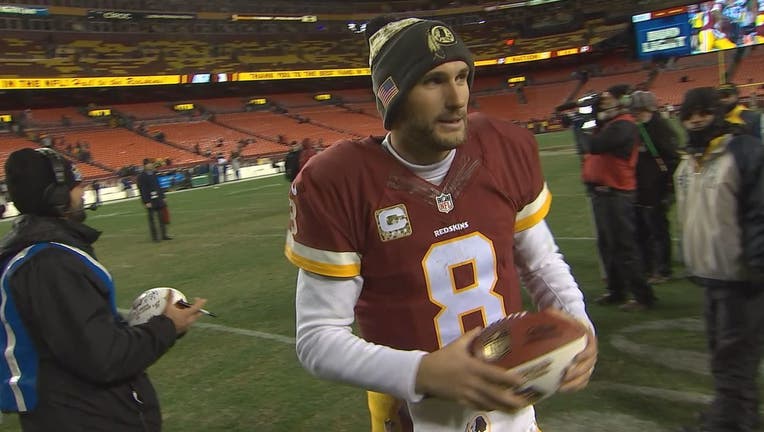 ASHBURN, Va. (AP) -- Running off the field after throwing for 375 yards and three touchdowns in the Washington Redskins' victory over the Green Bay Packers, quarterback Kirk Cousins stopped and yelled right into the ear of general manager Scot McCloughan.

It's a loaded question.

In leading the Redskins to six games in eight games, Cousins has 2,398 yards and 16 touchdowns with just four interceptions. He has 3,091 yards this season while playing on the franchise tag and wants a lucrative, long-term contract whether it's from the Redskins or someone else.

"He's made progression in every area of his game, and he's continuing to do so," coach Jay Gruden said ahead of the Redskins' Thanksgiving Game against the NFC East-leading Dallas Cowboys. "You can see it. It's 'Eye in the sky don't lie,' so to speak. ... The more comfortable he gets, and the people around him, and the system, the better he's going to be.

How much do the Redskins like him is the question. After not being able to negotiate a long-term deal, they're paying him $19.95 million this season, and a second consecutive year on the franchise tag would cost $23.94 million.

That's in the range of what Baltimore's Joe Flacco, Arizona's Carson Palmer and Atlanta's Matt Ryan will cost against the salary cap in 2017, and Cousins doesn't yet have the resume of those established starters. Cousins is getting there, and he knows each game is a test.

Cousins downplayed the grander meaning of asking his GM, "How you like me now?" But the 28-year-old has a history of being fired up in big moments, like when he screamed, "You like that?" after leading a comeback from down 24 against Tampa Bay last season.

When Cousins gets asked about his contract situation, he calmly recalls a football lifetime of dealing with uncertainty.

"In high school, I played my senior year with no scholarship offers and had to prove myself to earn a scholarship," Cousins said Tuesday. "I went to Michigan State and played my senior year not knowing what was going to happen with the NFL. It wasn't like I was projected to be a high pick and had to prove myself there. I came here as a backup on a rookie contract as a fourth-round pick, didn't know what was going to happen, had to play that contract out and just prove myself. Here we are again."

Cousins waited patiently to earn the Redskins' starting job when he was drafted the same year as Robert Griffin III, but now isn't the time for patience. Urgency has suited Cousins well, and he has helped Washington rebound from an 0-2 start to get to 6-3-1 going into the showdown with Dallas.

Along the way, Cousins has gotten better at extending plays, making better decisions with the ball and connecting on deep throws. He has a 104.9 QB rating in the past eight games and earning praise from Gruden for his growth.

"There are so many things that a quarterback has to do pre-snap that he's handling much better than he did when I first got here," Gruden said. "Then his confidence to throw the ball and distribute the ball to the right people and not forcing the issue. His interceptions have gone down tremendously. He's protecting the football in the pocket. There's so many things that he's doing better that you just can't point to one."

Cousins acknowledges that even though he'll be 29 by the time next season starts he's still learning. But his veteran teammates see plenty of evidence that Cousins can be a franchise quarterback.

"Kirk, he's a winner, he's a leader, he's everything you want in a quarterback," said tight end Vernon Davis, who played last season with Peyton Manning. "Each and every week he's getting better and better."