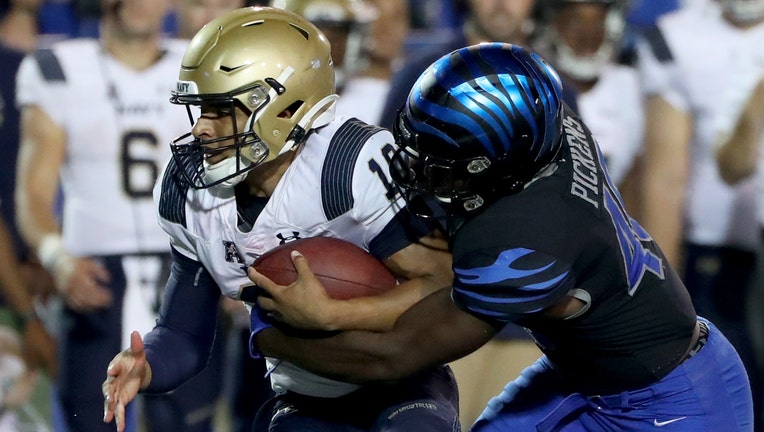 As usual, the Midshipmen were controlling the ball, their defense was living up to its new reputation as a stingy unit and Memphis was struggling on both sides of the ball with Navy holding a 20-7 lead.

"They looked tired on defense," Navy coach Ken Niumatalolo said. "We felt like we had them right in our wheelhouse."

Things were so bad early in the third quarter, the Memphis fans were booing quarterback Brady White.

Kenneth Gainwell rushed for 104 yards, including a 75-yard touchdown on the Tigers opening play from scrimmage as Memphis (4-0, 1-0 American Athletic Conference) knocked Navy from the unbeaten ranks.

"That game is a game — we talked about it all week long — that is a program-defining game," Memphis coach Mike Norvell said. "The reason being because of who we went against. That's a good Navy football team."

Malcolm Perry led the Midshipmen (2-1, 1-1) with 82 yards passing and 91 yards rushing. He ran for two touchdowns and threw for another. Keoni Makekau rushed for 101 yards for Navy.

The game was a contrast in styles with Navy grinding out yards and maintaining possession, while Memphis capitalized on big plays. The Tigers scored on long runs, a 99-yard kickoff return by Gabriel Rogers and the trio of touchdown passes from White, who was booed by Tigers fans early in the second half as the offense struggled under his leadership.

"You worry about that at times as a coach," Norvell said. "When there's a lot of outside influence that might not be positive all the time, you've got to truly believe in yourself, be true to who you are and trust your training. That's what he did."

After Navy took a 20-7 lead, Memphis scored three unanswered touchdowns to pull away in the second half. The run started after the Navy touchdown — Perry's second 1-yard run — put the Midshipmen up. Rogers took the ensuing kickoff and returned it 99 yards for the touchdown, pulling Memphis within 20-14 at the break.

"That took so much wind out of us," Niumatalolo said of Rogers' return.

During the first half, the Memphis defense, which entered the game allowing opponents an average of 226 yards, was mystified by Navy's triple option. The Midshipmen grabbed chunks of yards in the rushing game, while Perry kept the Tiger defense off balance with occasional passes, including a 17-yard scoring toss to Chance Warren for an early lead.

It was the Navy defense that initially was living up to its billing, stifling the Memphis offense. Even when Memphis reached the red zone, a fumble stalled the drive. Penalties and a missed field goal only contributed to the Memphis woes as the Tigers collected only 98 yards of offense, in the first half, and that included Gainwell's opening burst.

By the early stages of the second half, the Tiger faithful were booing White. Not long after that, Memphis put its offense together and the Tiger defense started to stymie the Midshipmen holding Navy to 81 yards of offense in the second half.

"To come out and not play our best ball in the first half, see our guys respond and continue to keep believing in each other (was impressive)," Norvell said, later adding: "Everything (the Midshipmen) do is a challenge. They came out and played an incredible game, had a great plan against us.

"But our kids wouldn't be denied."

Navy: As expected, Navy controlled the ball and dominated time of possession at 38:39, and while it was successful in the first half, the Memphis defense adjusted in the second half. Meanwhile, the Navy defense that had been successful the first two games, continued to give up big plays at key times.

Memphis: The Tigers defense looked baffled in the first half, but adjusted to better control Perry's mastery at handling the ball. Quarterback Brady White managed to shut out the boos from Memphis fans early in the second half and bring the Tigers back for the victory.

Memphis safety Sanchez Blake led the Tiger defense with a team-best nine tackles. His interception of Navy reserve quarterback Perry Olsen on fourth-and-15 with about 2 minutes left sealed the win.

END OF A STREAK

Makekau rushing for 101 yards broke a string of 16 straight games in which defenses under Memphis coordinator Adam Fuller had not had a runner reach the century mark, that included three games this season, Fuller's first with the Tigers.

Playing the early game of the college football week, there is plenty of time to see if there is any shuffling in the Top 25. With Memphis in the category of "receiving votes" this week, and remaining undefeated, sneaking into the rankings is not out of the question, depending on losses by other teams.