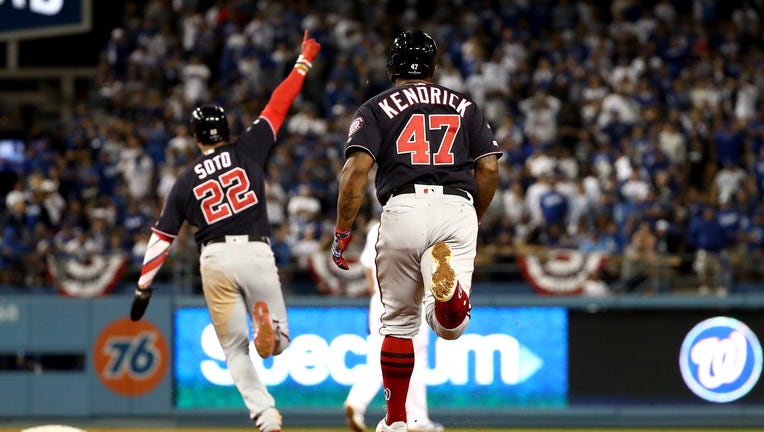 LOS ANGELES, CALIFORNIA - OCTOBER 09: Juan Soto #22 of the Washington Nationals celebrates after Howie Kendrick #47 hit a grand slam in the tenth inning of game five of the National League Division Series against the Los Angeles Dodgers at Dodger Sta

LOS ANGELES (AP) - Howie Kendrick hit a tiebreaking grand slam off Joe Kelly in the 10th inning, and the Washington Nationals overcame a three-run deficit with a late rally to beat the Los Angeles Dodgers 7-3 Wednesday night and advance to the NL Championship Series against St. Louis.

The wild-card Nationals open the NLCS at St. Louis on Friday night. The seven-time defending NL West champion Dodgers, who led the NL with 106 wins, remain without a World Series title since 1988.

Adam Eaton walked against Kelly leading off the 10th, Rendon doubled on a drive that lodged in the left field wall and Soto was intentionally walked.

Kendrick fouled off a pitch, then hit a 97 mph fastball just over the wall in center for his second career slam. The other one was a game-ending, 11th-inning drive against San Francisco in August 2017.

Daniel Hudson got the win, retiring Will Smith on a drive to the right field warning track with one on and one out in the ninth, then getting Chris Taylor on a liner to center.

Sean Doolittle pitched the 10th for the Nationals.

The Nationals/Montreal Expos franchise won a postseason series for only the second time, the first since the Expos beat Philadelphia in a 1981 Division Series caused by the midseason players' strike.