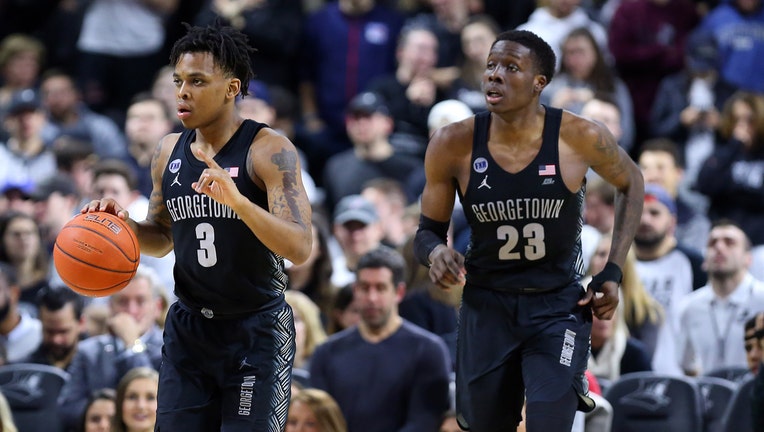 WASHINGTON - Georgetown’s starting point guard and a forward are no longer on the men’s basketball team “effective immediately."

The school published a statement on the Hoyas' website on Monday evening saying:

The school declined to explain why they are no longer on the team. FOX 5 has reached out to school officials for an explanation.

A complaint against Gardner includes an accusation of sexual misconduct.

A complaint against LeBlanc, Gardner, and Alexander includes assault and battery.

Akinjo is not named in any of the documents currently in FOX 5's possession, and the school has not indicated whether the lawsuit is linked to their removal from the team. Alexander remains on the Hoyas' current roster.

LeBlanc appeared in six games this season, averaging 7.2 points and 2.7 rebounds per game.

Neither Akinjo nor LeBlanc were listed on Georgetown’s roster around 8:15 p.m.

Akinjo and LeBlanc were two of Ewing’s top players, both among the top five scorers this season. They were a key part of a group the third-year coach hoped would help lead the school back to the NCAA Tournament for the first time since the 2014-15 season, when it made it under John Thompson III.

Akinjo was the 2019 freshman of the year in the Big East Conference, averaging 13.4 points and 5.2 assists, while making 39.1% of his 3-point attempts. He started 32 of Georgetown’s 33 games and appeared in all of them.

Ewing said before this season that he considered Akinjo and another sophomore, Mac McClung, one of the best backcourts in the country.

Akinjo was averaging 13.4 points and 4.4 assists this season for Georgetown, which has lost two games in a row heading into a road trip that takes it to Oklahoma State on Wednesday and SMU on Saturday.

LeBlanc has been averaging 7.2 points and 2.7 rebounds this season. But he appeared in only six games because he was suspended for the team’s opener.

As a freshman, LeBlanc started the last 22 games and averaged 9.1 points and 7.3 rebounds, earning a spot on the Big East all-freshman team.

Georgetown opened this season 4-1, including an 82-66 victory over then-No. 22 Texas at Madison Square Garden. But Ewing’s team followed that up with an 81-73 loss to then-No. 1 Duke in New York and a 65-61 loss at home against UNC Greensboro last Saturday.

Georgetown won the 1984 national championship with Ewing as the starting center. The team last reached the Final Four in 2007.