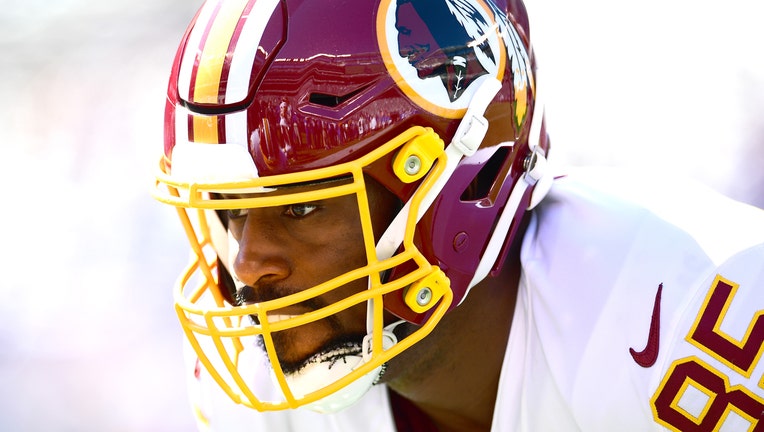 Vernon Davis #85 of the Washington Redskins looks on during warm ups before their game against the New York Giants at MetLife Stadium on September 29, 2019 in East Rutherford, New Jersey. (Photo by Emilee Chinn/Getty Images)

In the skit, Gronkowski, now an NFL analyst for Fox Sports, said he brought his "retirement" crew to Super Bowl LIV. The "Golden Gronks" featured Gronkowski, former Pittsburgh Steelers linebacker James Harrison and Davis, who announced his decision in the video.

Davis, 35, spent 14 seasons in the NFL. He ranks among the highest-paid tight ends in NFL history, earning more than $78 million in salary as a member of the San Francisco 49ers, Denver Broncos and Washington Redskins, according to Spotrac.

Davis won a Super Bowl as a member of the Broncos in 2016. He was a two-time Pro Bowl selection and retires with 583 catches and 63 receiving touchdowns.

A first-round pick in the 2006 NFL Draft, Davis invested his earnings in several businesses away from the field. He owns multiple Jamba Juice store locations, as well as Timeless, a supplement line.

"Most guys in the past, even myself and what I would do, a lot of companies would offer you, say, $150,000. Most guys would take that, walk away with it, spend it on whatever, maybe buy something, a car, whatever," Davis told FOX Business last year. "But nowadays we’re seeing a lot of guys take that money and put it back into the company."

Fox Corp. is the parent company of Fox Sports and FOX Business.