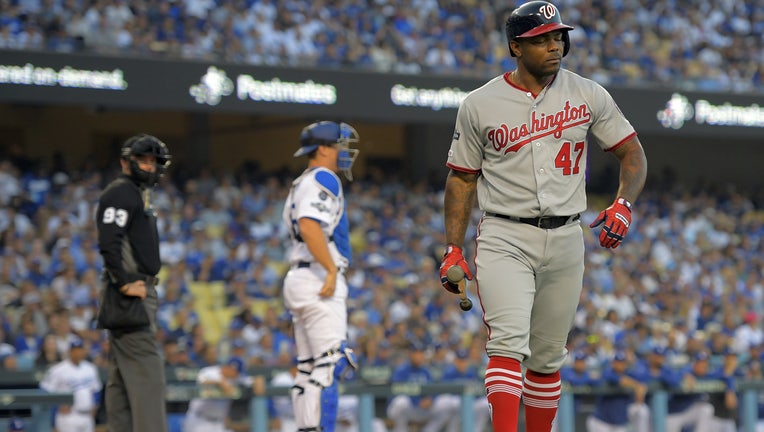 LOS ANGELES - (AP) -- Walker Buehler allowed one hit over six innings, Max Muncy drove in three runs and the Los Angeles Dodgers capitalized on mistakes to beat the Washington Nationals 6-0 in Game 1 of their NL Division Series on Thursday night.

Buehler struck out eight, walked three and retired his final seven batters after earning the start over veterans Clayton Kershaw and Hyun-Jin Ryu, whose 2.32 ERA was lowest in the majors this season.

"He set the tone for us," Muncy said about Buehler. "He was pounding the zone."

Nationals first baseman Howie Kendrick had two grounders roll under his glove, the second leading to the Dodgers' second run in the fifth.

Washington's Patrick Corbin stumbled through a rocky first inning. He issued four walks, joining Art Reinhart of the St. Louis Cardinals as the only pitchers to walk that many in the first inning they ever pitched in the postseason.

Reinhart walked four -- including Babe Ruth and Lou Gehrig -- in the fifth inning of Game 4 of the 1926 World Series against the Yankees.

"That first inning was the game," Dodgers manager Dave Roberts said. "That really set the tone."

Corbin walked three in a row with two outs in the 31-pitch inning. Yan Gomes was charged with a passed ball, too, and Muncy drew a free pass with the bases loaded to put the Dodgers in front.

"Walked a lot of guys, chased a lot of bad pitches," Nationals manager Dave Martinez said. "When you're walking guys and not hitting, it's tough to win ballgames."

Corbin gave up two runs -- one earned -- and three hits in six innings. The left-hander struck out nine and finished with five walks.

Cody Bellinger walked with two outs and scored on an error by Kendrick in the fifth that made it 2-0. Third baseman Anthony Rendon made a diving stop on Chris Taylor's single down the line, but his throw to first wasn't in time and Bellinger went to third.

Muncy's grounder rolled through Kendrick's legs for an error, scoring Bellinger, and Taylor got thrown out at the plate to end the inning.

In the fourth, Muncy singled leading off. Corey Seager followed with a hit that got past a diving Kendrick at first and rolled into right, sending Muncy to third. But then Corbin settled down and retired the next three batters to end the inning.

The Nationals loaded the bases in the fourth on three walks by Buehler. He escaped when Asdrubal Cabrera tapped the ball back to the mound and Buehler flipped to first to end the inning.

"From that first throw, he was on point," Roberts said of Buehler. "That's a really good lineup over there and for him to go six, we needed that."

Juan Soto, who had the key hit in the wild-card win over Milwaukee, singled in the second and Trea Turner singled in the ninth off Joe Kelly for the Nationals' only hits.

It was a quiet offensive night for each team's MVP contender. Rendon, who hit .319 in the regular season, went 0 for 2 with two strikeouts and a walk. Bellinger, a .305 hitter, struck out twice and walked twice.

It was the fourth shutout in eight games between the teams this season, third by the Dodgers.

Los Angeles won its eighth in a row dating to the regular season. Washington's nine-game winning streak, including the wild-card victory, ended.

Coming off the first relief appearance of his career, Washington RHP Stephen Strasburg will start Game 2 against Dodgers LHP Clayton Kershaw on Friday. Strasburg tossed three shutout innings Tuesday night in a dramatic wild-card victory over Milwaukee. He's under no limitations returning two days later. "My arm's felt great all year," Strasburg said. He would be available to return on normal rest for a potential Game 5 next Wednesday in Los Angeles. By starting Kershaw in Game 2, the Dodgers could possibly use him out of the bullpen if Game 5 is necessary.