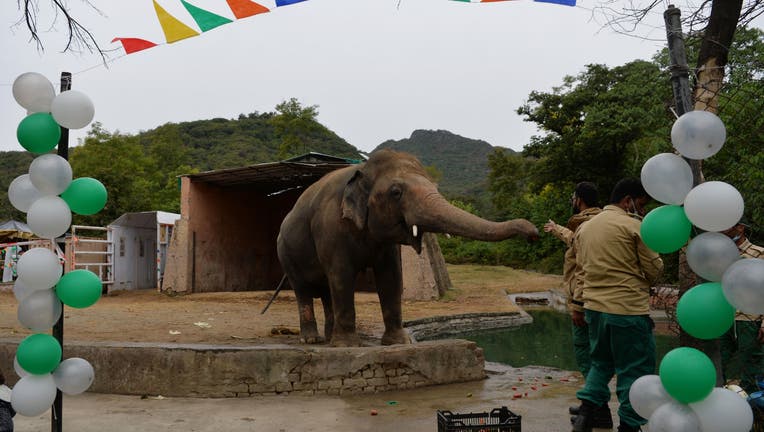 A wildlife caretaker feeds Kaavan, Pakistan's only Asian elephant, during his farewell ceremony before travelling to a sanctuary in Cambodia later this month, at the Marghazar Zoo in Islamabad on November 23, 2020. (Photo by Farooq NAEEM / AFP) (Phot

ISLAMABAD - Kaavan, dubbed the “world’s loneliest elephant” after languishing alone for years in a Pakistani zoo, was readied Sunday for his flight to a sanctuary in Cambodia and the much-needed company of other elephants.

The mammoth task of getting him into an elephant-sized metal box for transport took several hours, and was perhaps the most crucial step in rescuing him from the dire conditions he’s lived in for 35 years.

Had Kaavan been spooked and refused to enter the cage or bolted, his departure could have been delayed for months while the rescue team sought to restore calm and trust before trying again, explained Martin Bauer, a spokesman for Four Paws International. The global animal welfare group has led the charge to save Kaavan since 2016.

Iconic American singer and actress Cher also arrived in Islamabad last week, the culmination of her longstanding efforts to raise awareness about rescuing Kaavan from the zoo. Conditions there were so bad that a court in the Pakistani capital ordered the zoo closed in August.

Dr. Amir Khalil, a veterinarian with Four Paws who’s been treating Kaavan’s many wounds and ailments over the past three months, said he was hopeful about the next chapter of the elephant’s life.

“In the sanctuary in Cambodia ... waiting for him is three ladies, three Asian female elephants,” he said. “Now Kaavan might have a new partner, and share a new life with a partner.”

Khalil described how on Sunday he slowly and gently cajoled Kaavan to walk backwards into a steel crate, as nearly a dozen men carefully guided him inside using chains around his tree-trunk sized legs.

Kaavan is set to leave aboard a Russian cargo plane for the 25,000-acre sanctuary early Monday morning.

The plight of the male Asian elephant, who’s been alone since the death of his partner Saheli in 2012, has captured worldwide attention.

Cher’s animal welfare group Free the Wild has worked with Four Paws and the American syndicated columnist and philanthropist, Eric Margolis, to relocate Kaavan — a mission that’s cost about $400,000. She’s also making a documentary film about the process.

Kaavan was diagnosed earlier this year as being dangerously overweight, owing to his unsuitable diet of around 250 kilograms (550 pounds) of sugar cane each day.

Kaavan’s wounds are emotional as well as physical. He would spend his days throwing his head from side to side, a stereotypical sign of boredom and misery in an elephant, Bauer said, and something the Four Paws team has been working to treat.

The loss of his mate Saheli in 2012 took a toll on Kaavan’s mental health. Elephants are social animals that thrive on the company of other elephants, Bauer explained. For Kaavan, the last eight years have been akin to living in quarantine — something the world has come to understand all too well amid the coronavirus pandemic, he said.

“I always compare it to us humans now during the pandemic. We are locked away for 14 days isolated and we all know how that feels,” Bauer said.

Saheli developed a small infection in her foot that went unattended and became gangrenous. When she died, her lifeless body lay for several days beside the heartsick Kaavan until zookeepers eventually removed her.

For much of his time in Pakistan, Kaavan was kept chained in a small enclosure surrounded by a moat of water. The floor irritated his feet and toenails, which are badly damaged and will require years of treatment in Cambodia, said Bauer. He arrived in Pakistan as a gift from Sri Lanka when he was only a year old.

Four Paws first came to evaluate Kaavan’s situation in 2016, said Khalil, the veterinarian. The team returned in August following the zoo’s court-ordered closure, and the decision was made to resettle him.

The zoo once housed 500 animals, but by August barely 30 were still alive, and Kaavan’s condition had deteriorated.

“They always say it takes a village, but it took a whole country to get Kaavan moved to Cambodia,” said Bauer, who applauded Pakistan’s Wildlife Foundation, which first sounded the alarm about Kaavan.

While Kaavan is the most celebrated rescue at the zoo, Bauer said Four Paws has already relocated about 30 animals from there.

All that remain are a deer, a monkey and two retired dancing bears — Suzie and Bubaloo — whose teeth had all been removed by their previous owners to stop them from biting customers and the owners. The bears will be relocated to Jordan in December with the assistance of the Princess Alia Foundation, headed by the eldest daughter of the Jordan’s late King Hussein.

“Elephants are ambassadors from the jungle, and they deserve to live like ambassadors,” Khalil said.