Flooding across Frederick County caused serious problems for drivers across the area.

(FOX 5 DC) - The remnants of Tropical Depression Ida wreaked havoc throughout the DMV Wednesday. Severe thunderstorms and possible tornadoes caused trees to fall, ripped down power poles and lines, and caused heavy flooding in some areas.

At Rock Creek Park in DC, water levels have the creek looking more like a river as storms slam the area.

FOX 5's Jennifer Delgado is at Rock Creek Park in DC where water levels have the creek looking more like a river as storms slam the area.

The damage started early for those in Virginia, coming overnight for many. Fairfax County Police and Fire had two rescues in the early morning hours at Woodburn Road and Spicewood Drive, and another on Metro Center Drive.

Over in Stafford County, schools were closed for the day as officials prepared for the impending weather. Decatur Road in the area of Treasure Lane was closed down after a tractor-trailer overturned in the slick conditions. 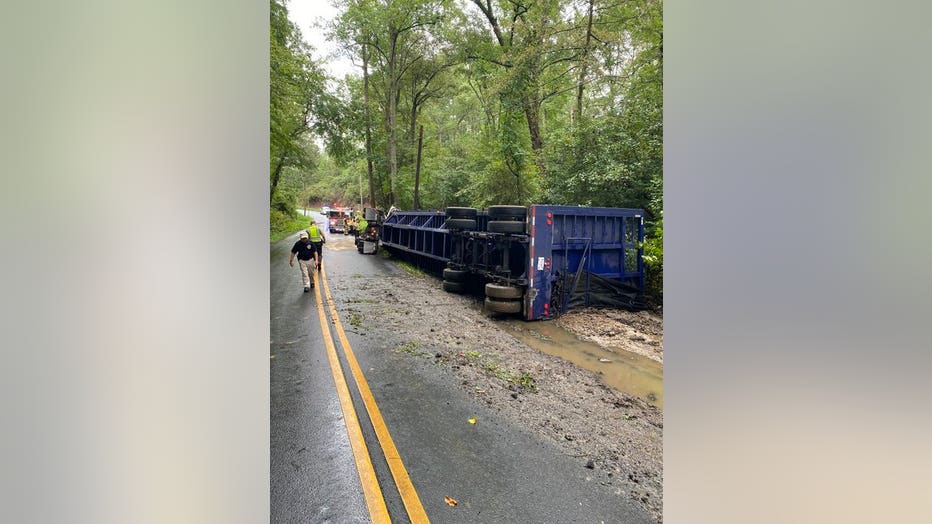 Over in Maryland, a tree slammed into a home in the early morning hours. Around 4:30 a.m. Prince George's County Fire Units were called to a home in the 7600 block of Seans Terrace in Lanham for a collapse.

At the scene, crews found that a large tree was on the home as a result of the storm. Thankfully, there were no injuries or transports.

One of the areas hit hardest was Anne Arundel County where a tornado touched down. People recorded several videos of the funnel and the resulting damage.

Several areas in Annapolis that are facing a big mess after a tornado touched down, causing serious damage to roads and homes.

Video shows a possible tornado in Annapolis as heavy rain and wind hit the area. (CREDIT: @MarylandBluCrab via Twitter)

There was serious damage on West Street in Annapolis. The in and outbound lanes of the road between Gibraltar and Chinquapin Round Road were closed as the fire department worked to clear the area. Officials say it is unsafe and drivers are encouraged to use an alternate route.

Photos show a home that was hit hard in South River Colony neighborhood of Edgewater. Several trees also went down in the area and debris littered the road.

A local high school in the area was also damaged by the severe weather. South River High School had significant damage to the concession stand and the stadium seats after large trees fell.

Widespread damage is left behind in Edgewater following afternoon storms.

Video shows a possible tornado caught on camera in the Edgewater area of Maryland. (CREDIT: @BigErnSDMD via Twitter)

There were no injuries, but school starts for the Edgewater students one week from today. That means a lot of cleanup for the school.