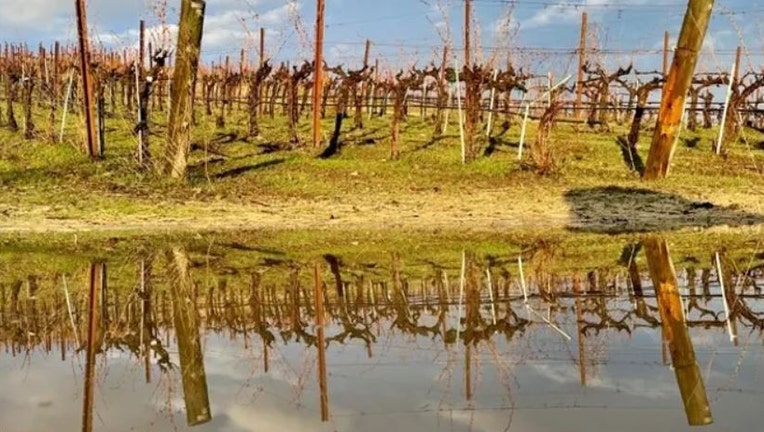 The winery has already seen and entire year of rain in just the past months. (Tablas Creek Winery / FOX Weather)

After almost 2 feet of rain in the past two weeks, general manager and partner of Tablas Creek Winery Jason Haas wrote, "Let’s keep it coming." He said this despite intense rain and overflowing creeks closing the winery on Monday and Tuesday.

A series of atmospheric river storms have pummeled California with heavy rain and strong winds, flooding parts of California and even some wineries.

The amazing video shows water in sheets rushing off the saturated ground into Tablas Creek. The water level was so high that the creek ran a foot or two over the road to the winery's entrance. Strong winds also blew down trees and branches, and mudslides all but covered the road that led to the winery.

At the end of the video, the canyon walls lining the roadway are just bare dirt. All the vegetation flowed into the road along with rocks and inches of soil. But Haas is happy.

"After consecutive drought-reduced crops, I'm hoping for a historically wet winter," wrote Haas in the Tablas Creek blog. "Something that will replenish our aquifers and reservoirs, delay bud break to a more normal time frame and set us up for a couple of years."

And Tablas Creek's viticulturist, Jordan Lonborg said, "These are good problems to have as far as I'm concerned."

He says that irrigation ponds are full, and the soil anchoring his grapes is saturated and filtering the water for storage in deeper levels.

The past three years were plagued with drought. Tablas Creek's viticulturist, Jordan Lonborg said the last time he saw the ponds full was 2018. Las Tablas Creek hasn't flowed through the property since early 2019.

And the nearby reservoir and lake are filling up but ready for more water. Haas said they are only at 13% and 38% of their capacities.

HOW WEATHER CAN IMPACT WINE PRODUCTION

"The impacts to this point have been essentially all positive for us. We've already surpassed our rainfall for the winters of 2019-20, 2020-21 and 2021-22," Haas wrote. "With the intense rain, we received nearly 6" in 24 hours, and the saturated soils, there have been issues with flooding, road closures and mudslides. At Tablas Creek, the vineyard and cellar have held up well."

The vineyard in hilly Paso Robles in central California is well suited for these heavy rainfall events, he claims. Water runs down hills into rivers and spillways, feeding lakes in the valleys. 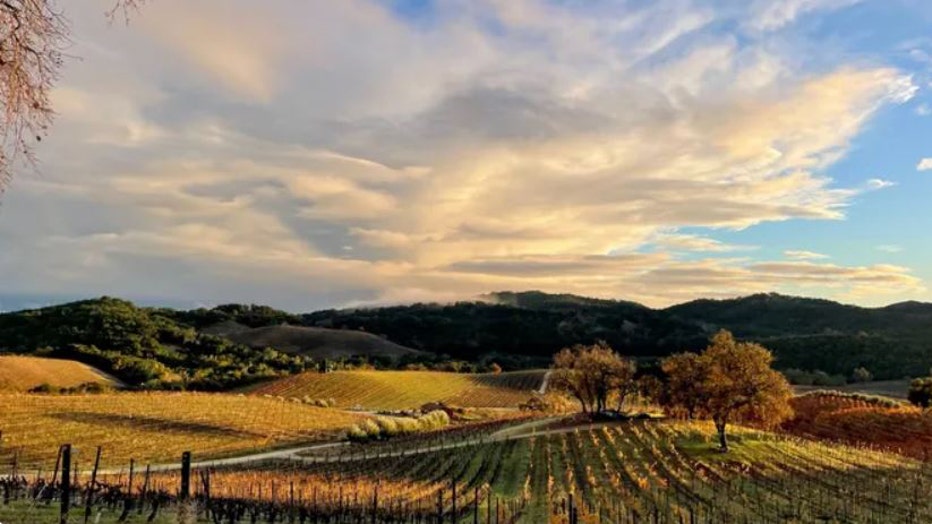 "Our calcareous soils are exceptionally porous, which means that they transport massive volumes of water from the surface to deeper layers before they reach saturation," continued Haas. "By the time they do saturate, the winter grasses tend to be well-enough established that erosion is minimal."

Even standing water can benefit the vinesm over the winter while they are dormant. 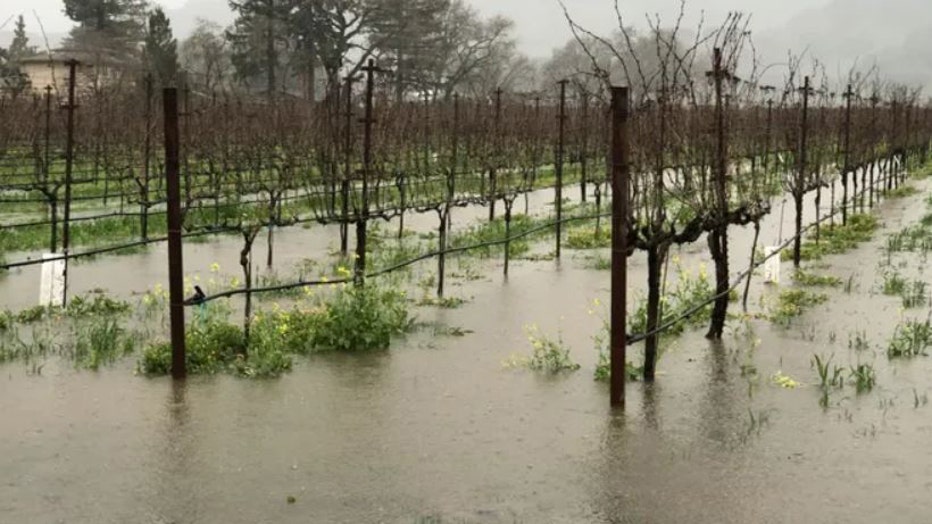 "Standing water during dormancy can actually be very helpful, especially in conventionally farmed vineyards," said Lonborg of the half of his grapes not dry-farmed. "The water can help to leach salt residues from fertilizers deeper into or away from the soil profile."

Some of the few that do take issue with Tablas’ "bring it on" attitude are the winery's sheep that graze on the cover crop, plants between the rows. Tablas depends on the flock for fertilization over the winter. The winery can’t have the hooves compacting the soil, which happens during very wet weather.

"Tablas looks great right now. We were able to get our cover crops planted before the first rains of the year so those roots systems have held the soil together nicely," said Lonborg who inspects the vineyards for erosion.

The Tablas Creek Winery already saw double the amount of rain they usually see by this time of year. Their water year runs from July to June. Thanks to the late-month storm, December 2022 provided three times the average rainfall for the month. That is just shy of their wettest December in Haas’ 20-plus years at the property.

As of January 5, the hills saw almost an entire month’s worth of rain to start 2023 as seen on the graph. 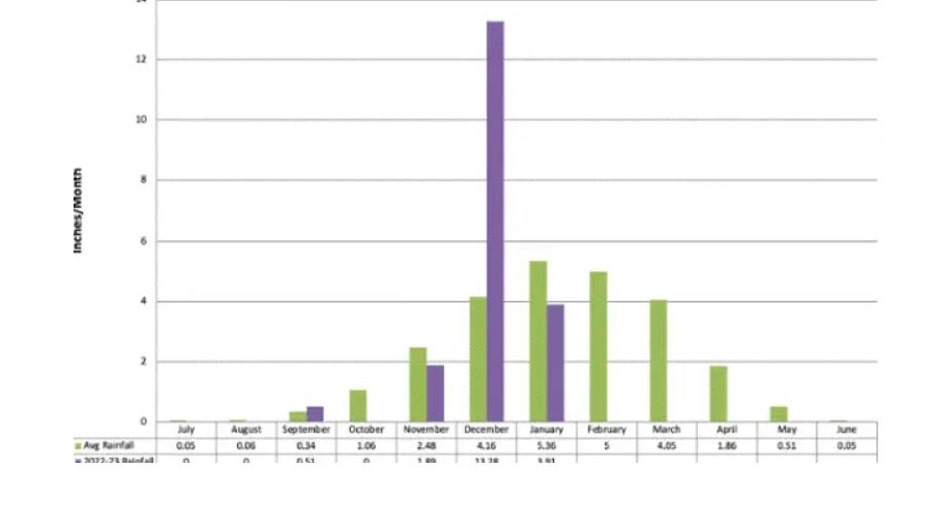 The green shows average rainfall per month that Tablas Creek sees in a year that they measure from July to June. The purple shows the actual rain that fell during the 2022-23 rain year. (Tablas Creek Winery / FOX Weather)

This week’s atmospheric river pushed the annual rainfall to 26 inches.

But they still have half a year to go, and rain is minimal for the area from April to October. So even though the vines already enjoyed more rain than the 24.98" they see in an average year, the rain needs to keep coming.

"A couple of storms in February and March would be great to keep cover crops and percolation going," Lonborg said.

"Frost is a major concern in much of Paso Robles. When you have bud break in late February or early March, the chances of frost damage greatly increase," explained Lonborg. "The longer dormancy is delayed, the fewer days there are where frost is an issue."

Consistent rainfall also raises the water table allowing roots to tap into the moisture and feeds the well. That saves cash. 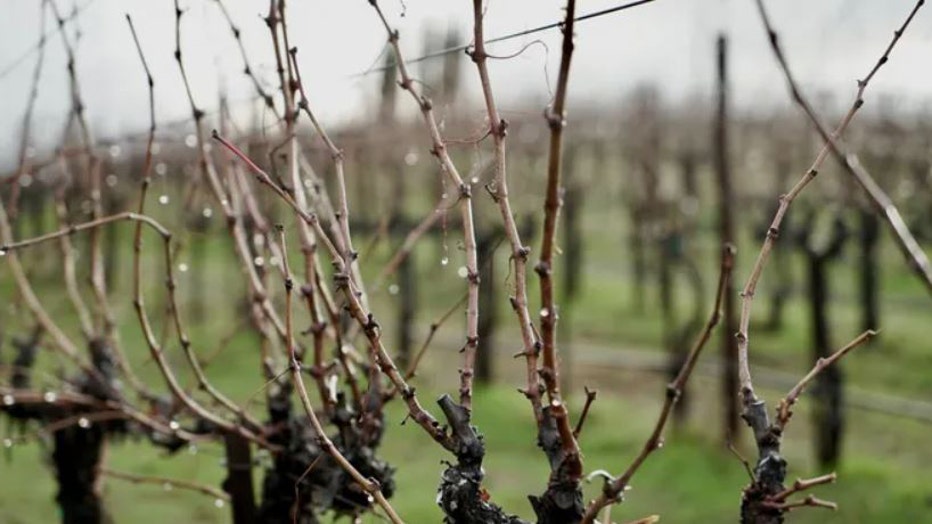 "The more it rains now, the less we irrigate later. Less pumping costs, less labor costs etc.," Lonborg said. "We have a well on the property that tends to dry up toward the end of the season, during dry years, when we need the water most. That will not be the case this year."

Lonborg would appreciate a break from the rain though. He and his crew need to prune while the vines are dormant, but they can't prune in the rain.

"We avoid pruning before, during and just after rain events at all costs to avoid the spread of trunk diseases such as Eutypa," he said. "Spore bodies pop during rain events and spread spores infecting fresh pruning wounds on vines."

FOX Weather expects the next rainmaker on Thursday

Get the latest updates on this story at FOXWeather.com