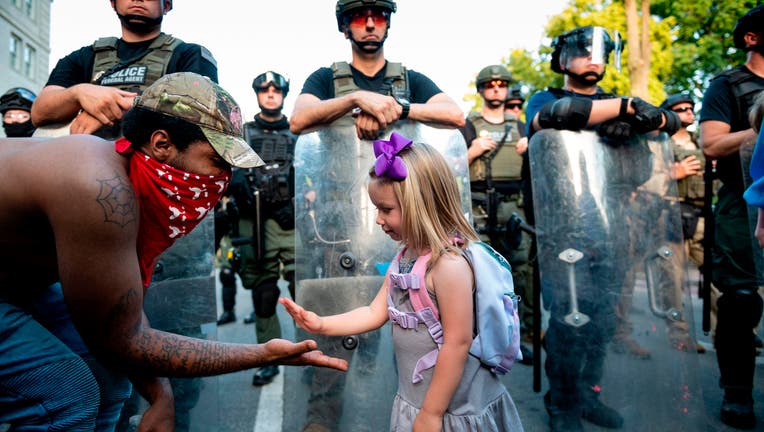 Twenty-nine-year old DC resident, George (L), slaps hands with three-year-old Mikaela (R) in front of a police barricade on a street leading to the front of the White House during protests over the death of George Floyd on June 3, 2020, in Washington

As protesters call for justice in the case of George Floyd, who died in police custody in Minneapolis, many are also pushing the idea of defunding the police.

Minneapolis Mayor Jacob Frey, a progressive, was confronted by this disparity on Saturday at a protest after members of the Minneapolis City Council vowed to "dismantle" the city's police department. Protesters told Frey to leave and chanted "Shame" after he said he did not support the full abolition of the Minneapolis Police Department.

RELATED: Crowd kicks Minneapolis mayor out of rally for not backing defunding the police department

Who would replace police officers, according to "abolish the police" activists? The answer isn't crystal clear. A group called A World Without Police says one of its goals is to "disband police forces entirely in democratic self-governing areas, and replace them with systems of community safety and conflict resolution."

An ACLU petition calling to "divest from the police" had more than 50,000 signatures on Sunday.

"The most recent eruption of protests across the U.S. – demanding justice for George Floyd, Dreasjon Reed, Breonna Taylor, Tony McDade, and countless other Black people who have been killed by police – has laid bare what we've known for too long: The policing institutions in our country are deeply entrenched in racism and brutality, and we cannot allow it to continue," the petition reads.

Minneapolis may be ground zero for the idea, but leaders in cities including Washington, D.C., and Los Angeles are already grappling with demands to reduce or cut off police funding. Activists added the phrase "defund the police" to the "Black Lives Matter" mural on 16th Street leading to the White House, and celebrities including John Legend and Chance the Rapper are weighing in.

"Defund the Police. Chop the tree down," Chance the Rapper wrote on Twitter, adding, "How about first you realize that cops don’t actually stop murders they can only commit them."

Meanwhile, Los Angeles Mayor Eric Garcetti is putting his money where his mouth is, although some critics say he's not going far enough. The city will aim to cut between $100 million and $150 million from its police budget to invest in communities of color.